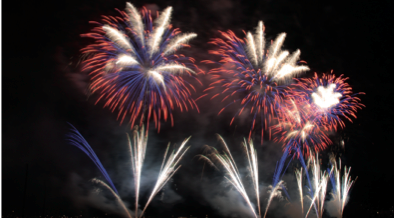 Anything planned for New Year’s Eve in Zurich? In case you didn’t know there is an amazing firework display taking place in town on December 31st which started back in 1988 as a small New Year’s Eve party on Zurich’s Gemüsebrücke and which has now evolved into an annual event. Starting at 8pm, the party goes on till 3am (program below) with the highlight being a spectacular 20 minute firework display lighting up the Zurich skies. 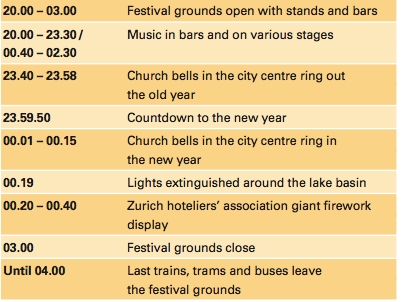 Visitors from across Switzerland and overseas are expected to visit the country’s biggest New Year’s Eve celebrations and enjoy the party atmosphere and watch the amazing display. The area around the Quaibrücke and the Limmatquai will be pedestrian-only from 8pm on 31st to 6am on 1st January, and the whole area around the lake from Limmatquai through Hechtplatz and up to Utoquai as well as over the Quaibrücke at Bellevue as far as the General-Guisan-Quai will be full of vendors selling food and drinks and there will be music too!

The fireworks, which are sponsored by Zurich Hoteliers Association, will be set off from 00.20am to 00.40am from two specially anchored boats.

Parking will be extremely limited so it’s best to use public transport to go to the New Year’s celebrations. The ZVV trams and buses will be running until 4 o’clock in the morning – so why not go along and see in the New Year with a bang?