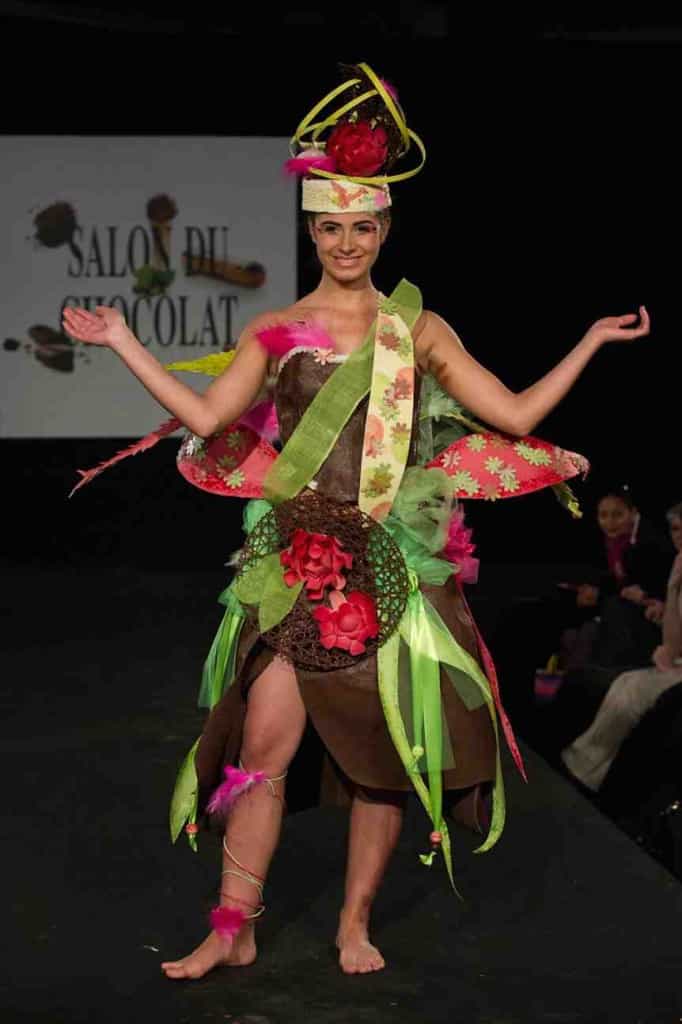 One of the biggest attractions at the Salon du Chocolat is the fashion show featuring dresses made of chocolate, which takes place every evening at 5pm. The dresses are an amazing feat of work and the result of a collaboration between a Maitre Chocolatier and a fashion designer. After the fashion shows there is an opportunity for the audience to vote and at the end of the 3 day event the overall winner is announced. This year the winner of the 2014 Salon Du Chocolat dress in Zurich was the Fleischli dress designed by Britta Haupka of Peppermilla and created by Nina Oppliger.

NewInZurich was lucky enough to go behind the scenes in the weeks leading up to the Salon du Chocolat and see at first hand how a chocolate dress is designed and created – little did we know at the time that the dress we were viewing would in fact be the winning dress. We visited Baeckerei Fleischli in Niederglatt and met up with met with Nina Oppliger, maitre chocolatier and Claudia Schmid, the head of pasty and confectionery, together with the designer, Britta Haupka of Peppermilla, and saw the various stages of production as the dress evolved from the original sketch to the final garment. 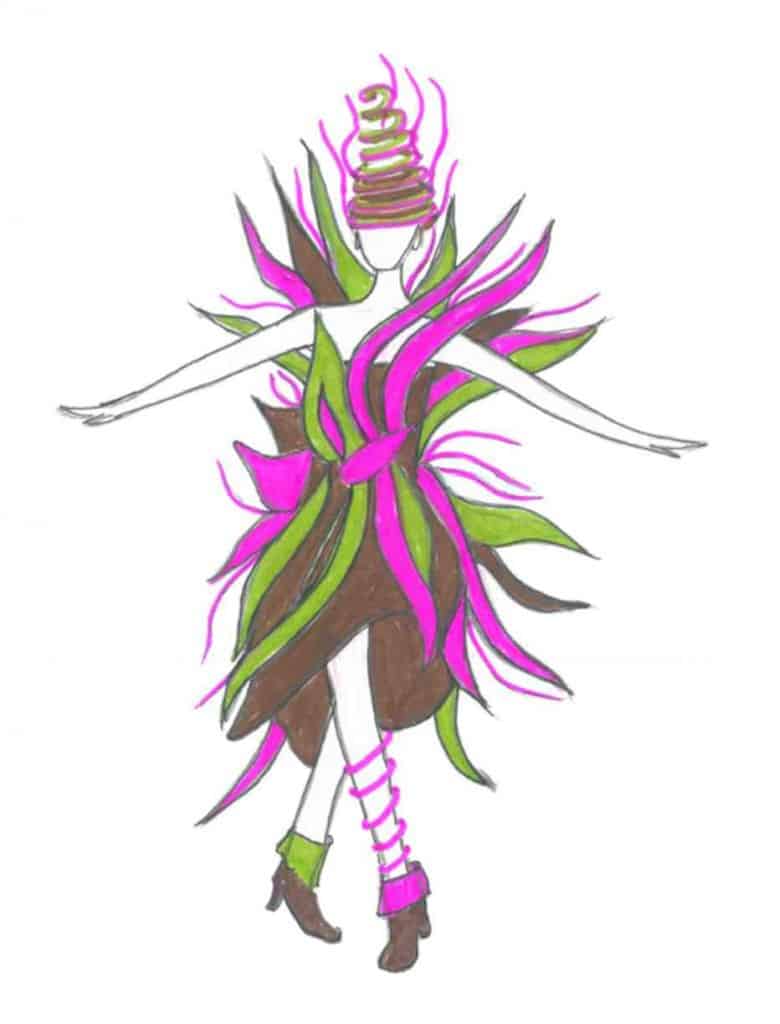 Taking between 80 and 100 hours of work to create, a chocolate dress presents some very special challenges for the designer and the creator alike. From the design on paper, a template is created that becomes the foundation onto which the chocolate couverture will be painted on and then sprayed on top. 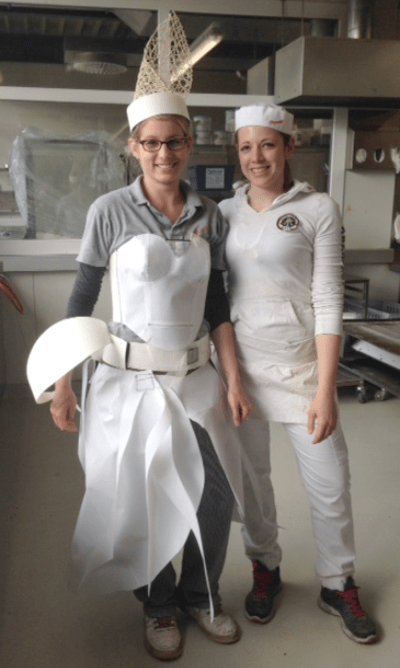 Nina Oppliger with her colleague modelling the original template

Chocolate doesn’t “give” so special fastenings have to be created to avoid breaking or damaging the couverture. The chocolate used is a very special couverture made so that it has a higher than usual melting point to avoid melting. Ease of getting on and off has to be factored into the design – but this year’s Salon du Chocolat theme of fantasy and mysticism also needed to be expressed. The colours for the dress were chosen to mirror Fleischli’s choice Easter colours this year, namely pink and lime green. The beautiful hat added the finishing flourish. 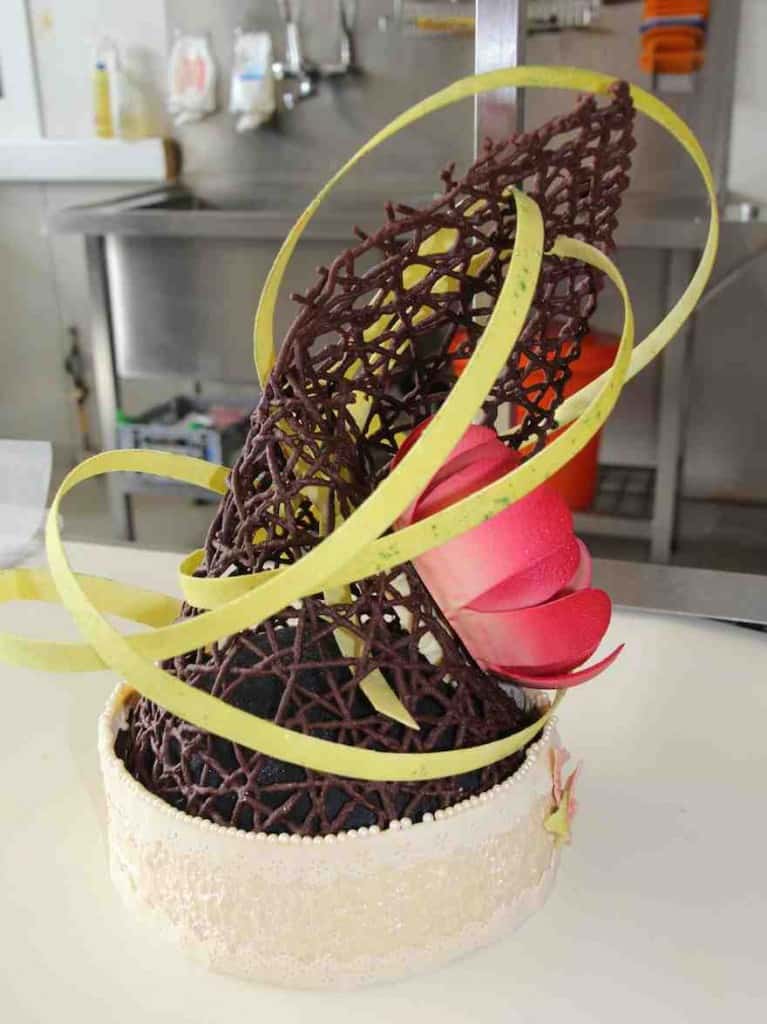 The flowers add colour and decoration to the dress and the hat, but extra flowers are made … just in case! The photo above shows the hat near completion. 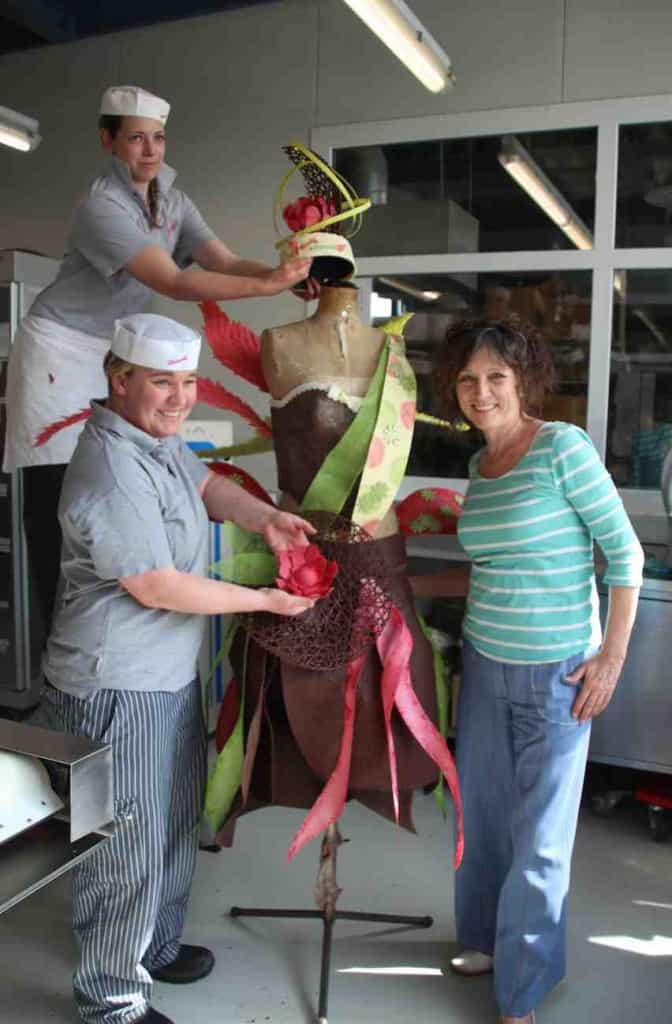 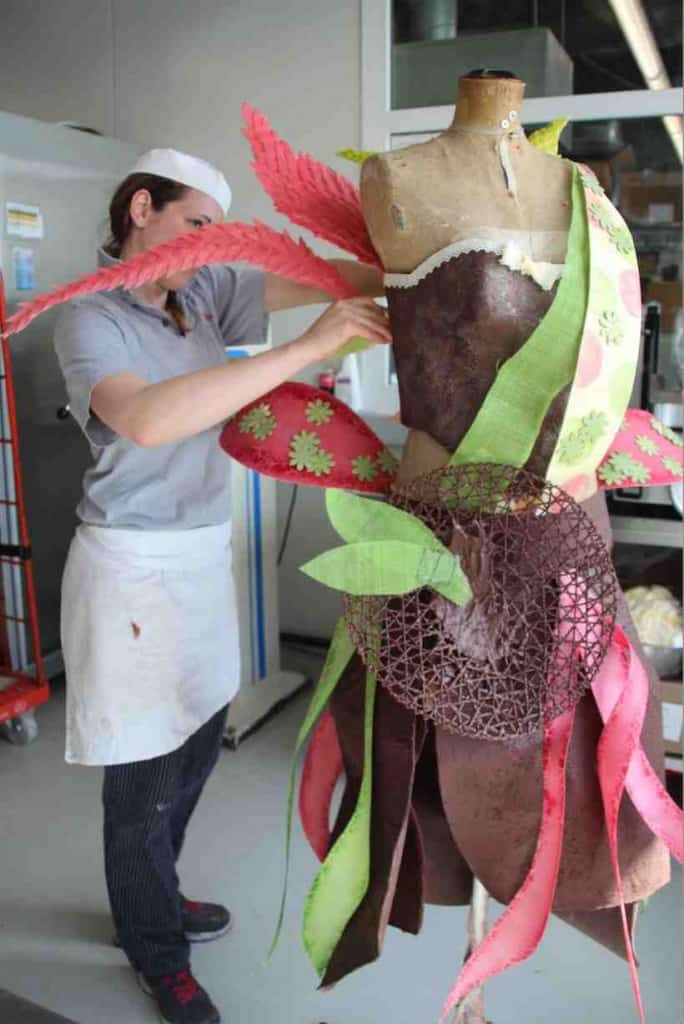 Fleischli had a stand showcasing their chocolates and cakes at the Salon du Chocolat and they also demonstrated the making of the Fleischli “Amaretti Cru Sauvage” and “Nusshäsli” chocolates. 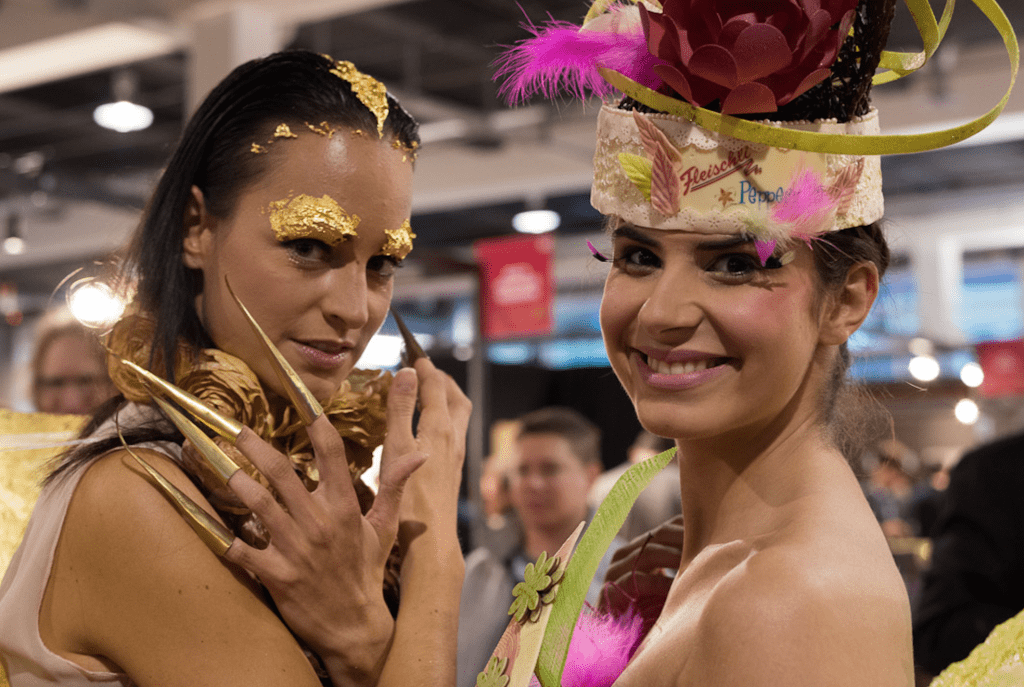 The dress was modelled by Leila Becic seen here with another contender at the Salon du Chocolat in Zurich. The winning dress will be taken to Paris in October for a special exhibition which is being organised by founder Sylvie Douce to showcase unique dresses from the past 20 years of the Salon du Chocolat, when it was founded by Sylvie and her husband Francois Jeantet back in 1994. 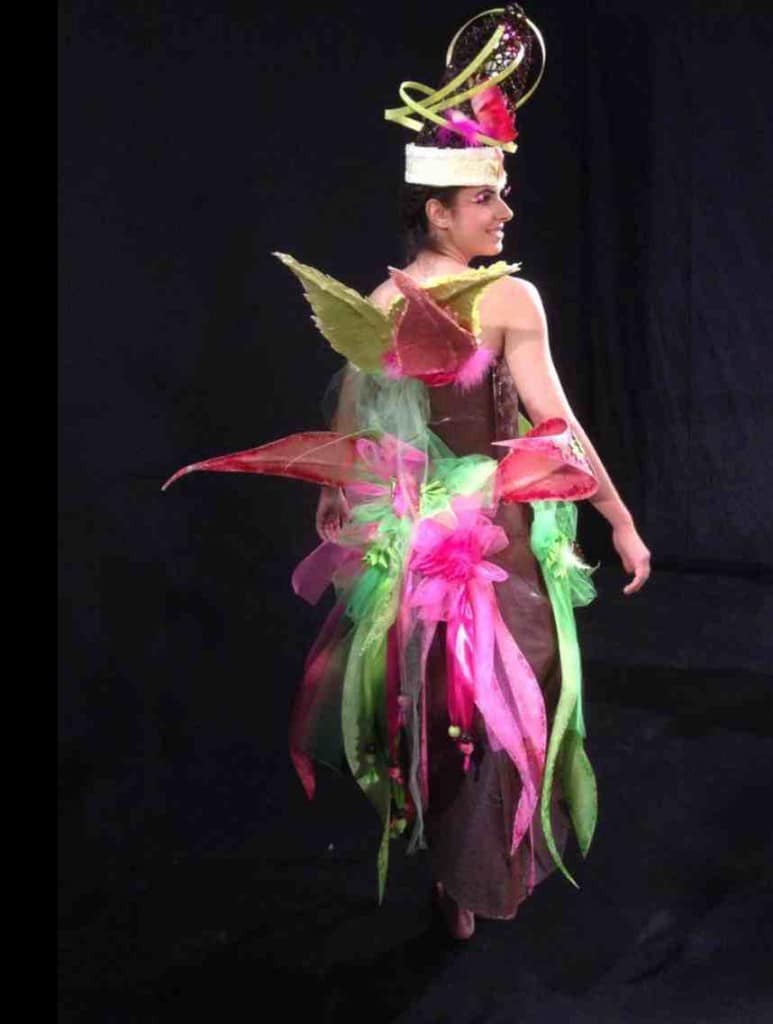 The family-run Fleischli Bäckerei owners Elspeth and René Fleischli, pictured below with the rest of the team, were delighted to have won the prize, especially since this was the first time that they had entered the contest. 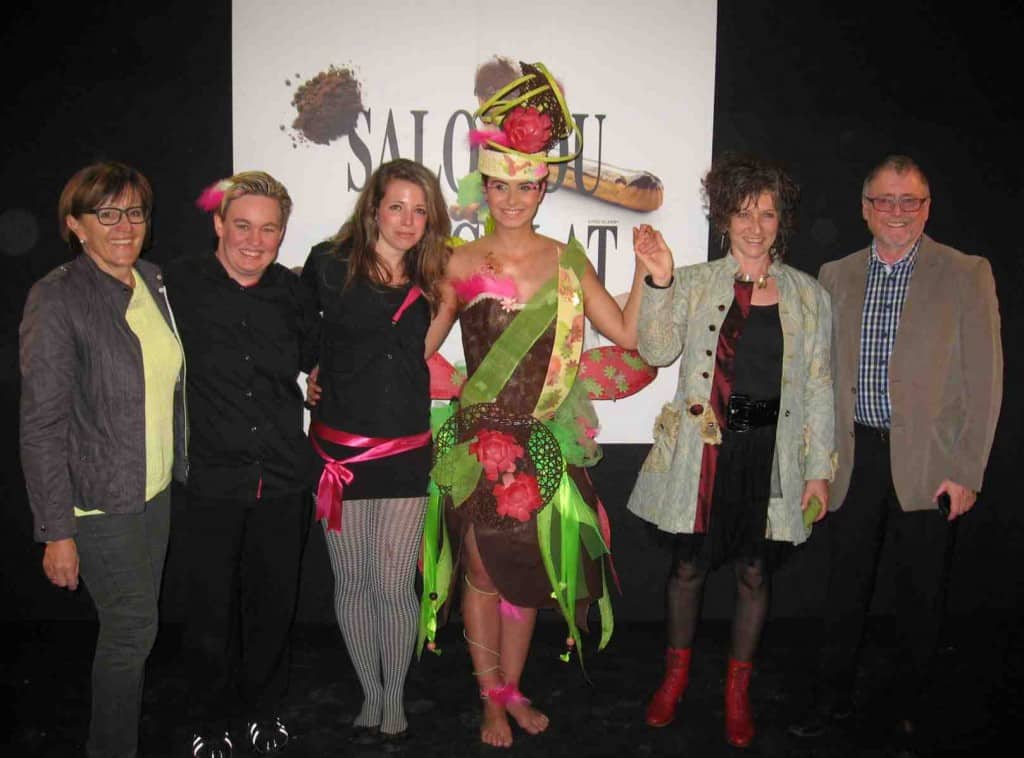 For more information about the Salon du Chocolat and to see more photos of the chocolate dresses please read our previous article here.

To see an article about the making of Sprungli dress for the 2013 Salon du Chocolat please read here.

For “what’s on” in and around Zurich from Easter onwards please see here.

For more information about events in Zurich feel free to “subscribe to blog” at the top of the page.

New! Take Away & Delivery from Mönchhof Am...