Zurich Film Festival is celebrating it’s 10th Anniversary this year and there will be plenty of special events to accompany this landmark! Academy Award nominee Liam Neeson will be present at the Gala Premiere on October 3rd showing his latest film a crime drama, based on Lawrence Block’s bestselling mystery novel “A Walk Among the Tombstones“.

The Irish actor is probably best known for his portrayal of Oskar Schindler in the 1993 film “Shindler’s List” and for other notable films including “Husbands and Wives”, “Third Person”, “Kinsey”, Star Wars Episode”, “Les Misérables”, “Michael Collins” and “Nell”.

Diane Keaton will also be attending the Zurich film festival in 2014 to receive the “Golden Icon Award”, the most prestigious accolade. She will be presenting her latest film, “And So It Goes“, directed by Rob Steiner, in which she co-stars with Michael Douglas. Diane Keaton has had an extraordinary long and distinguished career and has reinvented herself over the intervening years. Back in 1977 she received an Oscar for “Annie Hall” and she has appeared in over sixty movies in total, from films as diverse as “The Godfather Part III” in 1990, “Reds” in 1981 to “Something’s Gotta Give” with Jack Nicholson in 2003.

Australian Oscar winner Cate Blanchett will also be here in Zurich opening an exclusive photographic exhibition at the festival centre. The exhibition will feature 60 photographs out of the 20,000 taken by German photographer Peter Lindbergh, shot in the Spring in Portofino in Italy.

The exhibition which is open to the public, is entitled “Timeless Portofino” and will be open from 28th September to 5th October. Cate Blanchett will also be presenting “Blue Jasmine“ directed by Woody Allen. 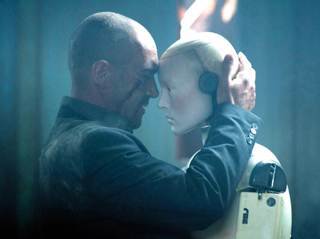 Hollywood actor Antonio Banderas will be attending the Zurich Film Festival on Friday 26th September to present the film  AUTÓMATA along with his co-writer and director Gabe Ibáñez. This science fiction film is set in 2044 depicting a world on the verge of catastrophe and ecological collapse, where robots are part of the norm.

The Zurich Film Festival 2014 kicks off its 10-year jubilee edition with the biopic music film “Get On Up“ from director Tate Taylor on 25th September and the festival runs until 5th October. The full programme for ZFF2014 will be announced by the Festival directors, Nadja Schildknecht and Karl Spoerri, on Thursday 11th September and tickets will go on sale on 15th September. It promises to be a great event so we hope you will enjoy! For more information please visit the website.

Why not subscribe to the blog at the top right hand of the website to keep up to date on events in and around Zurich?