Home » Swiss Festivals » Where Can I see an Alphorn being played?
Share
0
FacebookTwitterPinterestEmail 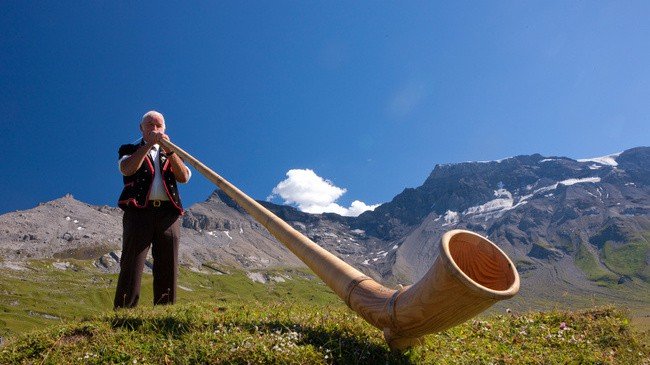 Where Can I see an Alphorn being played?

A reader emailed NewInZurich last week to ask where he could go to see an Alphorn being played and if they are ever played in Zurich? He also asked why the Alphorn was invented. So we thought we’d share our findings …

So what is the Alphorn? The “Swiss national instrument”, as it is often referred to, is a wooden wind instrument. A long, conical tube, bent at the end like a cow’s horn. The Alphorn used traditionally to be made from young, crooked pines but nowadays is made out of ash or other woods, or even carbon. The horn is wrapped in rattan and there is usually a mouthpiece added to give better control over the sound.

They can often be seen at Swiss parades and festivals all over Switzerland including Zurich. We have often come across them being played in the woods around Zurich and once even saw one being played in Paradeplatz just off Bahnhofstrasse. See videoclip here

We also spotted Alphornists at Sechseläutenplatz outside Opera a number of times too.

The Swiss National Holiday on 1st August is a great day to find them in evidence all over Switzerland. However, there are many other festivals all over the country where the Alpine horn is played, usually with everyone attired in Swiss National Costume.

Why was the Alphorn invented? 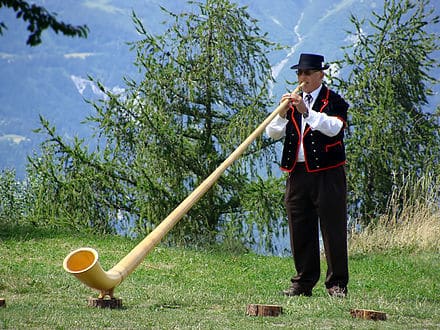 The Alphorn was invented by herdsmen to communicate. It was used to call the cows from the pastures to the barn for milking and was also thought to pacify the animals too. Its main purpose though was as a tool to communicate with herdsmen in other mountains and with the people in the the valley below. However, the Alphorn had been dying out since the 1800s, as it lost its importance as a communications tool. When the large dairies in towns and villages took over the traditional cheese-making production from the Alps, the Alphorn was no longer needed.

However, the Bernese official Niklaus von Mülinen, who repaired Alphorns, saw to it that the Alphorn did not disappear. As it became increasingly endangered in the 1820s he distributed the instrument to talented musicians in Grindelwald. An increase in the popularity of Alp processions and traditional festivals around the same time also helped bring about a surge in interest in the instrument, whose melodic sounds were much admired.

Today the “Swiss National Instrument” is alive and well as a strong symbol of Swiss tradition and yes, as you can see, the Alphorn can be found in action in Zurich. Keep your eyes open, you never know you may spot one tomorrow 🙂

There were also Alphorn players at the pumpkin weighing contest at Jucker farm last Autumn.

Feel free to share this article using the buttons below

What’s On in and Around Zurich early January 2015

A Scenic Winter Hike To Etzel Kulm in...

FREE Geneva Card When You Staycation in Geneva!

What’s On in Zurich Beginning of December 2020