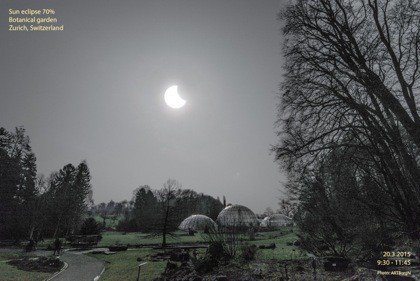 In case you missed the solar eclipse on March 20th 2015, photographer Lorenzo Borghi was ready with his camera and captured these shots for you. Lorenzo shot the photos (and the short time-lapse movie below) from the Botanical Gardens in Zurich.

The special sunglasses that you could use to safely view the eclipse were sold out in many of the opticians and pharmacies but if you were in Zurich and even if you didn’t view the eclipse directly, there was a noticeable darkness outside as this special event occurred.

A solar eclipse is a rare and memorable experience but it can also be highly dangerous to your eyesight as the sun’s rays are extremely intense – even at 150 million kms distance! Even looking directly at the sun for a few seconds can seriously damage your eyes as UV light floods in and can potentially burn the light-sensitive cells – causing permanent blurry vision and blind spots. 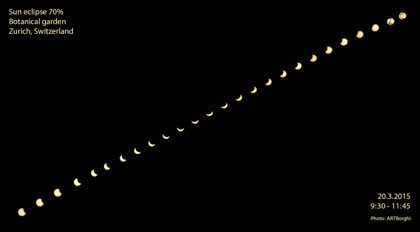 So what exactly is a solar eclipse?

Well, solar eclipses only happen when a new Moon takes place near a lunar node and there are three distinct phases as follows:

1) Partial solar eclipse as the moon moves over the Sun’s disc.

2) Maximum eclipse as the moon partially covers the sun. If you’re in the eclipse’s path you will see the moon appearing to take a bite out of the Sun

Here is the sort time-lapse video that Lorenzo captured:

For more information on the dates of the next solar eclipses please see here.

How To Make a Hand Sanitiser at Home

What’s On In Zurich Mid May 2021 Onwards

31 Ideas For Family Excursions Not Far From...

What’s On In Zurich Early to Mid May...

Guide To Restaurants With Outdoor Terraces in Zurich

Take a Ride on the UBS Polybahn Funicular...

A Trip To Paxmal The Amazing Peace Monument...