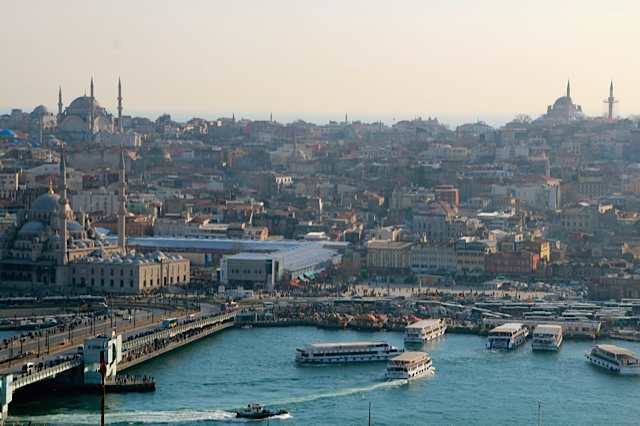 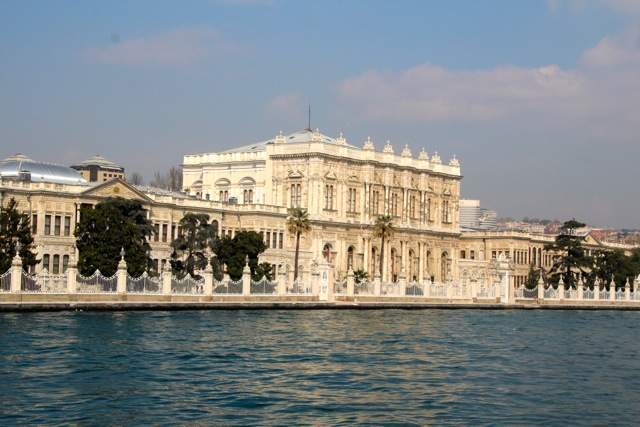 A few weeks ago we flew from Zurich to Istanbul for a 5 day stay in this bustling metropolis. Istanbul is one of those cities I’d long wanted to visit – so I was a bit worried that when I did actually get there it would be an anti-climax. However, with its 2,600-year history, its energy, diversity and double-continent span, Istanbul didn’t disappoint. The weather was rather changeable the 5 days I was there, but as I discovered Istanbul has something to offer for all seasons and in all weathers. There are certainly more than 5 reasons to visit Istanbul – but here are some suggestions. 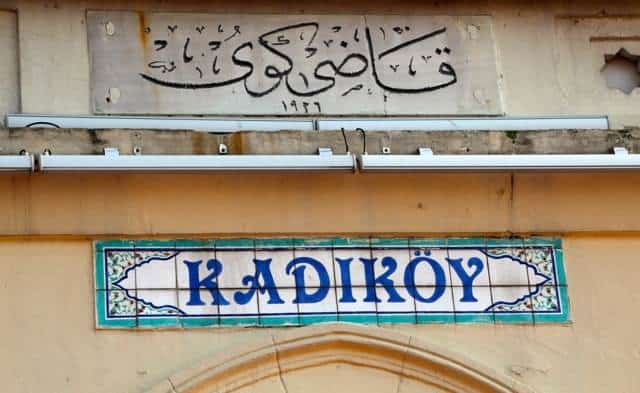 Arriving at Istanbul Sabiha airport and after paying the obligatory “visa” fee we made our way to Information Desk where they suggested that the quickest way to get to our hotel would be to take the tram to Taksim and then a taxi from Taksim to the hotel. Always keen to check out the infrastructure of the local transport network we gave this a go and duly purchased our “Istanbul cards” which operate in a similar way to London’s Oyster card – you simply top then up when you are running out of credit. Unlike the Oyster card you only have to “tap in” and not out again on each journey.

The taxis are fairly cheap and plentiful (though do make sure you have an idea of the price you should be paying before you step inside – and be aware that the traffic in the city gets very congested, especially at rush hour). We used quite a few taxis but discovered that the underground system was clean, efficient and fast and when the traffic was chaotic on the roads, the Istanbul Card came into its own.

All went smoothly on the tram journey from the airport and after meeting a couple of friendly locals who were keen to share their tips (and pracise their English) we’d gained some ideas for extra places to visit. The taxi from Tacsim drove us speedily to the Hotel Shangi La which was situated directly on the Bosphorous. 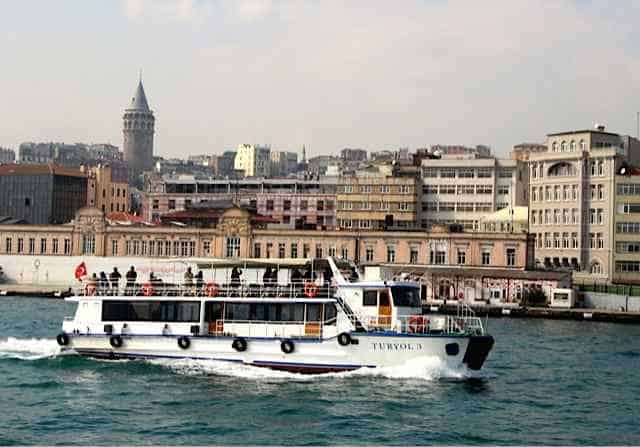 Istanbul’s cultural diversity is legendary. The magnificently decorated imperial mosques create a stunning skyline and are a legacy of the Ottomans whilst it was the Byzantines we have to thank for the mosaics and frescoes decorating the palaces and churches. The Greeks, Persians, Romans and Venetians all left their imprint on Istanbul and it is this intoxicating mix of culture and history that have made this city, once known as Constantinople, so very cosmopolitan.

The Sultanahmet area of Istanbul is a great place to start as many of the city’s finest attractions are to be found: the Blue Mosque, the Hagia Sophia and Topkapi Palace, the Istanbul Hippodrome, the sunken palace of Basilica Cistern and the Grand Bazaar. 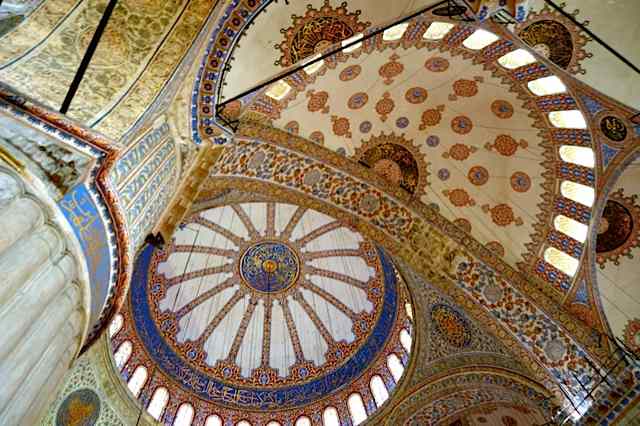 The first place we visited was the Blue Mosque, also known as Sultan Ahmed’s Mosque. Roughly 400 years old it is a working mosque and looks almost as beautiful from the outside as it does inside. Appropriate attire is required for women which basically means covering your hair in a scarf. If you’re female and don’t have a scarf they will lend you one at the entrance. Shoes must also be removed and to this end they actually provide you with clear plastic bags to put your shoes in. 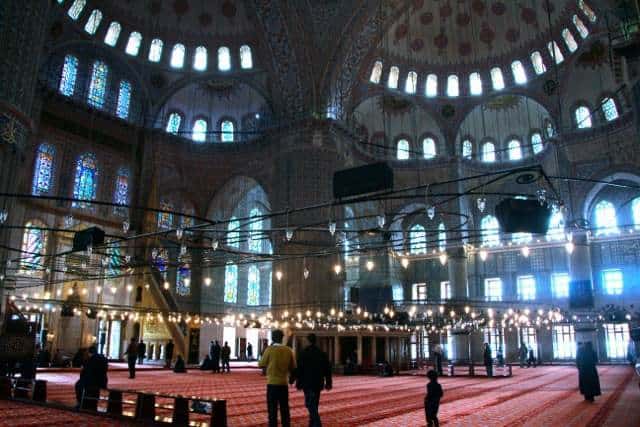 As you enter you are overwhelmed by the beauty of the walls, the ceilings, the lights and the intricate patterns. Only men are allowed in the central area – but you are able to walk all around the rest of the area and take photographs. 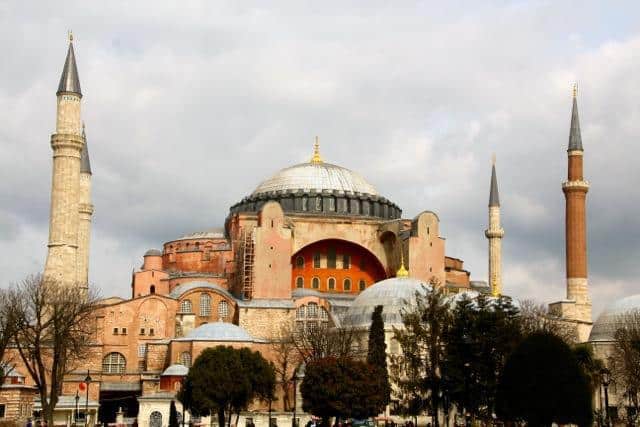 The building was commissioned by the great Byzantine emperor Justinian and in 537 was consecrated as a church in 537 but in 1453 it was converted to a mosque by Mehmet the Conqueror. It’s famous for its religious importance and deep history and is now a museum.

An amazing royal palace which is now a museum and was formerly the primary residence of the Ottoman sultans for approximately 400 years of their 624-year reign. There are four main courtyards and lots of buildings and you need a lot of time to see everything. The Topkapı Palace is listed within the “Historic Areas of Istanbul“, which became a UNESCO World Heritage Site in 1985 and it also contains important holy relics from the Muslim world, including Muhammed’s cloak and sword. 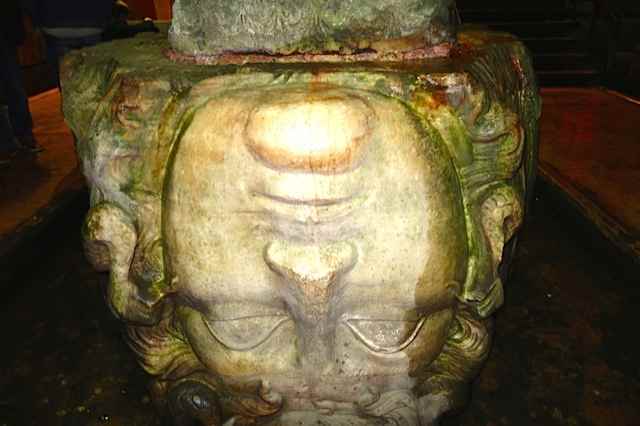 The Basilica Cistern, is the largest of several hundred ancient cisterns which are situated beneath Istanbul. The cistern is 150 m southwest of the Hagia Sophia and was built in the 6th century during the reign of Emperor Justinian I. The head in the photograph above depicts one of the visages of Medusa. 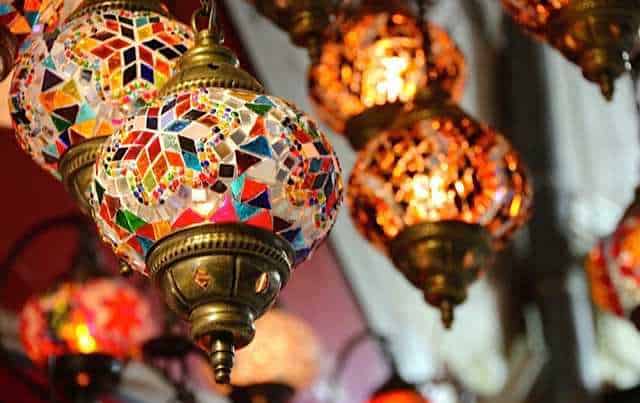 There’s great shopping to be had in Istanbul and we even found a salon with a hairdresser and manicure and pedicurist at amazing prices, right on the main shopping street which took immediate bookings. Don’t forget to try the local Turkish delight – it’s so different from the Turkish delight you get back home. 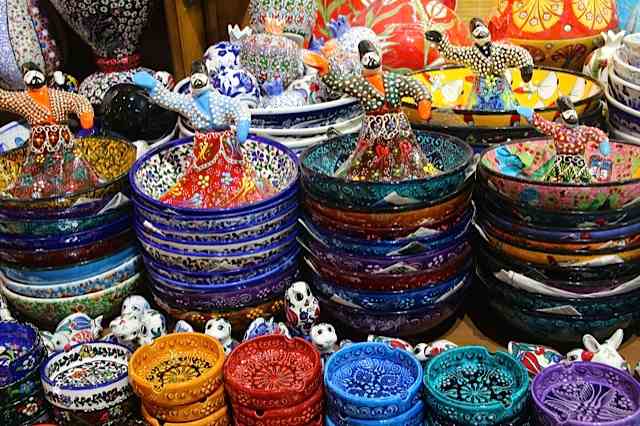 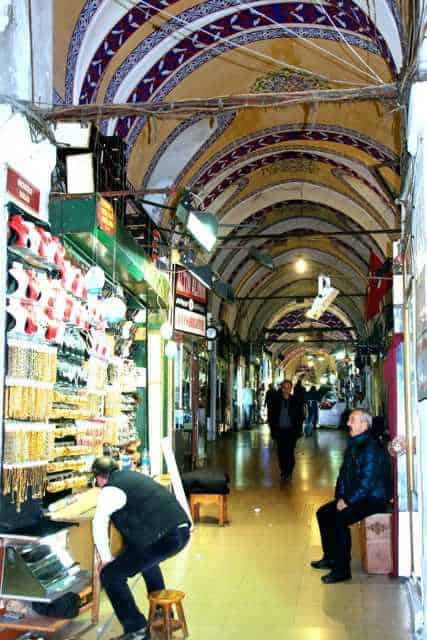 Apparently the largest covered market in Europe. Lots and lots of stalls selling everything from carpets, handbags, scarves to food and drink. Busy and boisterous – but it has to be done. Don’t forget to bargain! 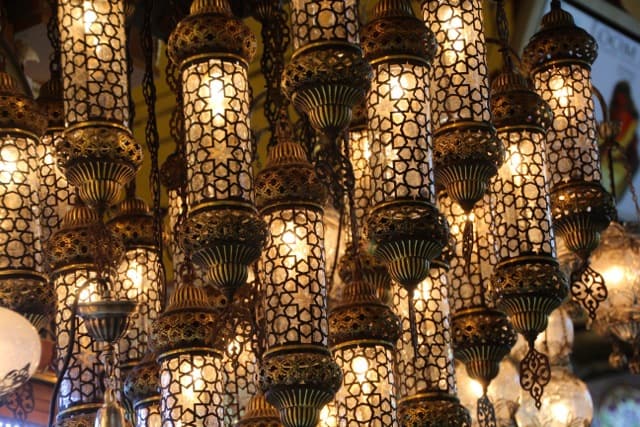 The Spice Bazaar is one of the largest bazaars in the city and is situated in the Eminönü area of the Fatih district. It has of course plenty of spices as well as turkish delight, oils and various other food specialities although it also offers other products now too. It’s the most famous covered shopping complex after the Grand Bazaar and can get crowded. Some tips: ask for vacuum packing for any spices you buy and try before you buy. Try to shop where the locals are buying and pay in local currency. 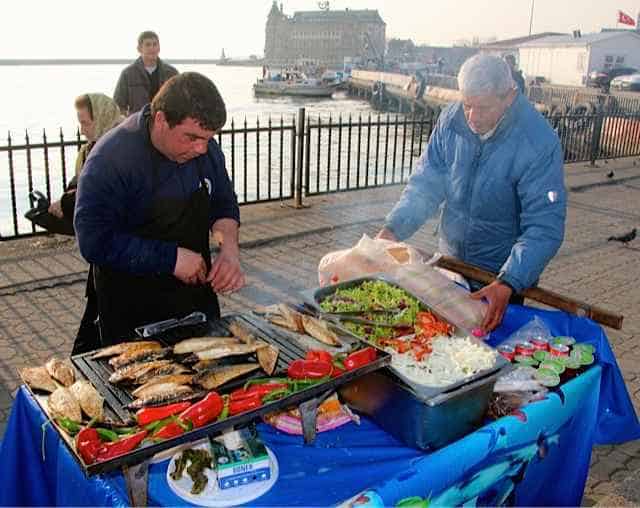 The city’s food is as diverse as its heritage and history – flavoursome, colourful and delicious. If you want to get some idea take a look at Anthony Bourdain’s No Reservations culinary trip to Istanbul and you will understand what I mean. From Turkish kebaps and amazing meze, to Asian fusion, Italian classics, freshly caught fish and everything in between Istanbul is definitely a city for foodies! Some of the best food we tasted was freshly caught fish on the quay and the delicious rice filled mussels – see below. 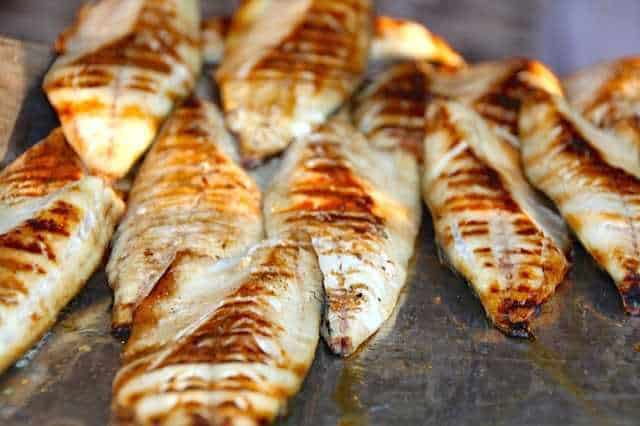 Freshly grilled fish on the quay 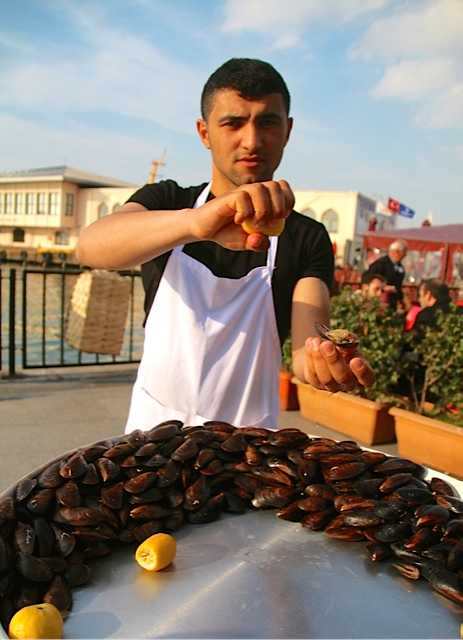 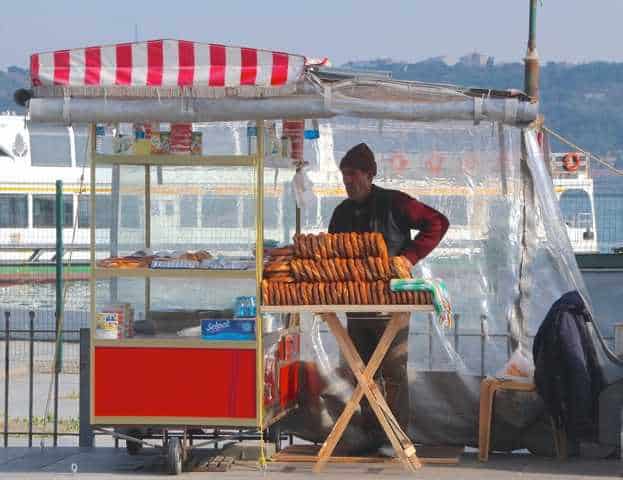 Bread vendors on the quay

Why not try the national drink raki, a grape spirit infused with aniseed, or the local wine or beer. Some words you’ll see are kahvehanı (coffeehouses), meyhanes (Turkish taverns) and kebapçıs (kebap restaurants) – but you will find delicious food and drink wherever you go – so follow your nose and your eyes and enjoy!

Our Turkish friend Sabi suggested we try out the House Café cafes and restaurants which are all over town, often located in renovated old historic buildings and we were not disappointed. In fact we tried out 4 of them and loved them – the food was fresh and delicious, they served great coffee and the locations were beautiful. Another recommendation of Sabi’s was Galata Kiva Han for authentic Turkish cuisine, located very close to the Galata Tower which offers great views over the city. 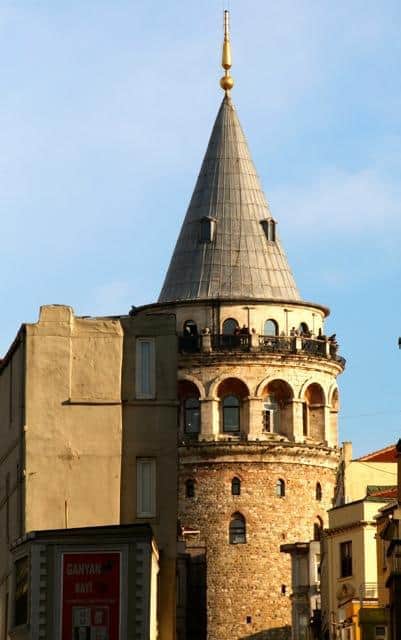 We had a great meal at Vogue Restaurant one evening with stunning views of the illuminated bridge. We also had an amazing meal at a fish restaurant called Akintiburnu which required a short taxi drive out of town. It was a recommendation from the hotel concierge and it was definitely worth the excursion.

Everywhere we went locals were happy to help and often came up to us as they saw us consulting maps or guidebooks. On the underground people started conversations and were happy to share tips on where to go and once they started talking about their restaurant recommendations there was no stopping them! They seem to have a love of life and were genuinely happy to share with us their beautiful city.

If this has inspired you to plan a trip to Istanbul have fun and enjoy! Don’t forget to share your top tips in the comments box below. 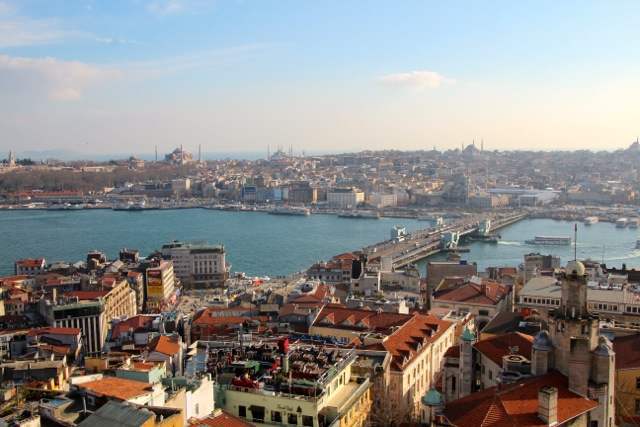 The Unspoilt Charm of the Beautiful Aosta Valley...

Top Things To Do On A Weekend in...

Top Things To Do in Slovenia – Visiting...

I am from İstanbul, living in Zurich at the moment, and I am glad you liked the city very much.

I would suggest you take a boat trip on Bosphorus. It’s great to see both Anatolia & Europe sides at the same time.

Turkish breakfast is a feast. Go for a Sunday brunch near the seaside 🙂

Hi Deniz thank you very much for your suggestions. Yes we did take a boat trip too and it was really interesting. There were so many things we did in 5 days that this is just a selection. Thanks for your tips though – and I highly recommend the boat trips too! Wonderful city!

This evening in Zurich by the Herzbaracke floating 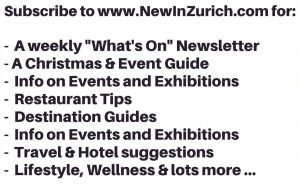