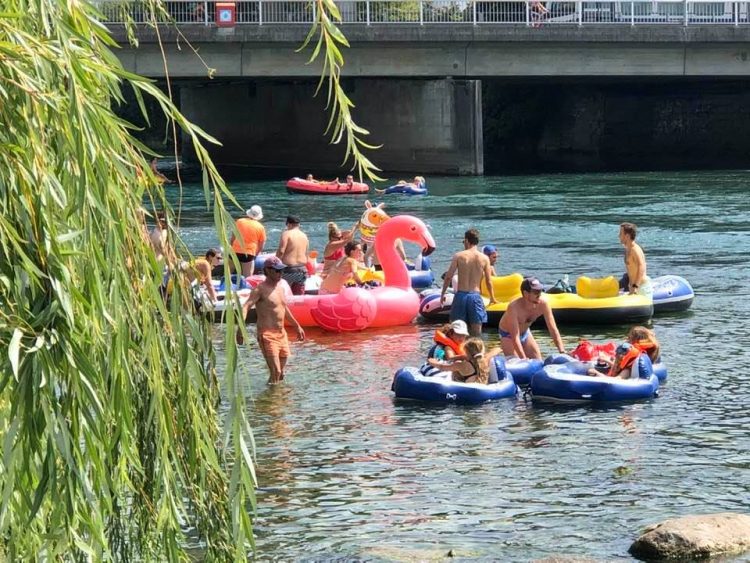 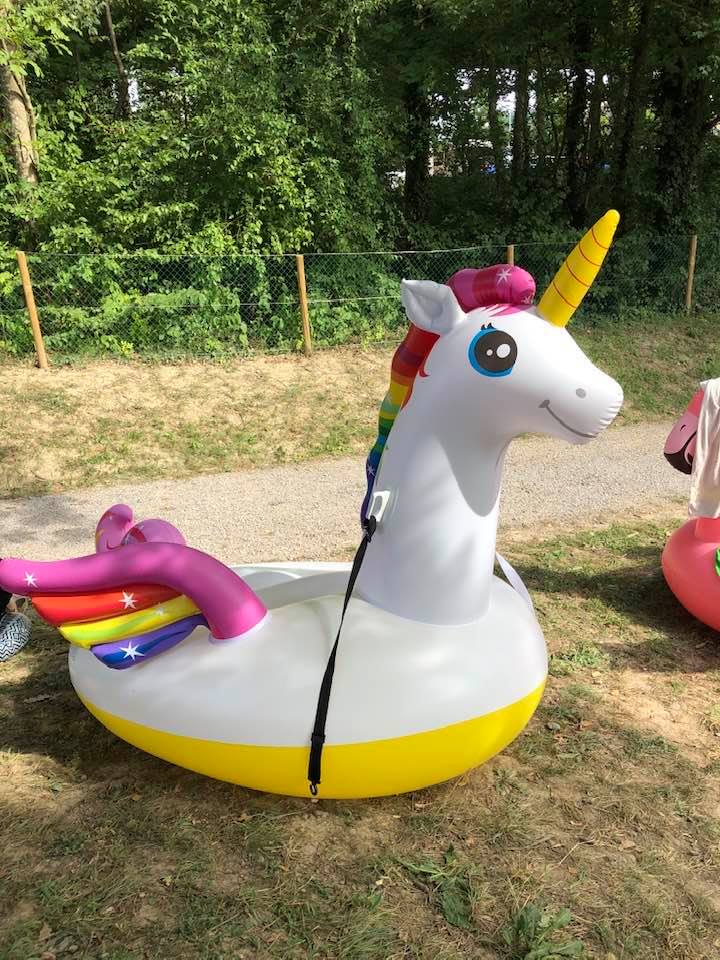 The Perfect Way To Cool Off In Zurich

As the Summer months wear on and some days it feels as if the Tropics have moved a dozen degrees further north, you can often see the people of Zurich floating down the Limmat. They have come up with an ingenious way of having fun and keeping cool. With swimming pools and the lakeside packed,  locals have been taking to the river in droves.

Where To Begin The Adventure – Wipkinger Park 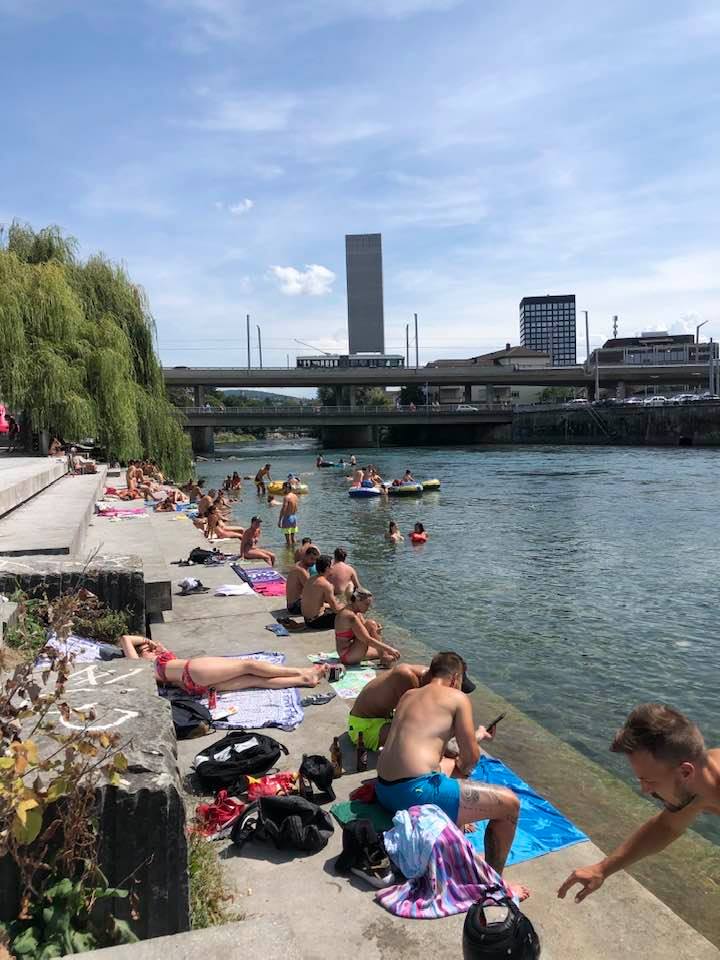 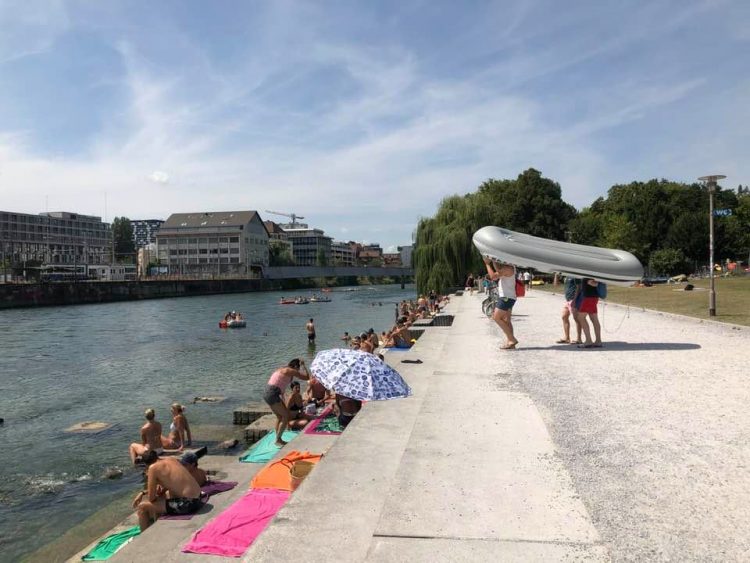 Just along from Escher Wyss Platz there are people clutching an armada of inflatables of all shapes and sizes. Young and old launch themselves into the water on the steps of the beach-like area at Wipkinger Park, to float out of central Zurich and down river. The practice has become so popular that floating on your little “Böötle” is one of the hottest (or probably coolest) things to do to in Zurich to beat the Summer heat. 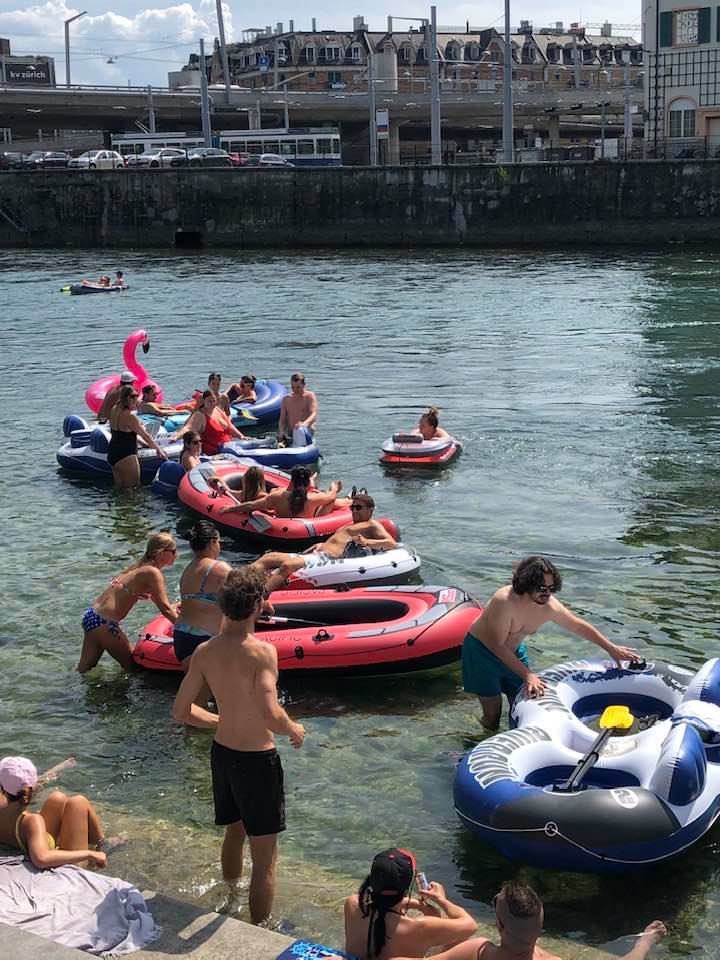 “Many people get out at Werdinsel” notes one local “but all you have to do is take your boat over the island and people go all the way to Dietikon”. Having asked how long it takes; they say “about 2 hours or so to Dietikon”. Only 15 minutes later we see them floating past us in their inflatable armchairs, beers in hand with a wide smile across their faces. 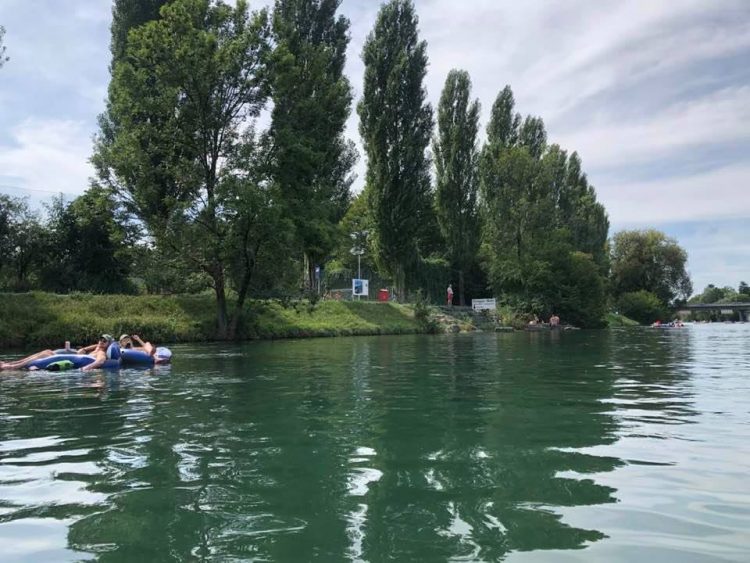 Some people begin their journeys from Hardbrücke, but we saw many starting a lot further upstream just after the weir. The route is mostly clear, however it must be noted that it includes some fast stretches of shallow and deep water areas (water level dependant) so do wear some sturdy footwear if you plan on taking a dip on the way. 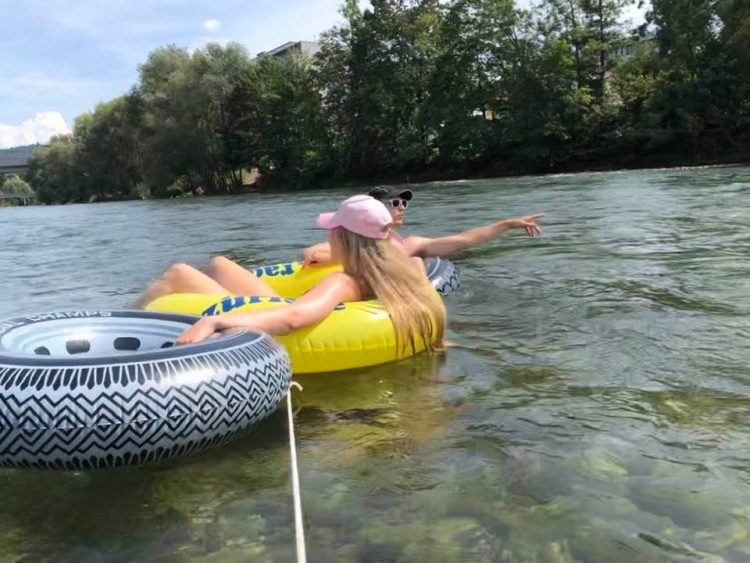 It’s a beautiful journey down the river and a great way of seeing Zurich from the water. 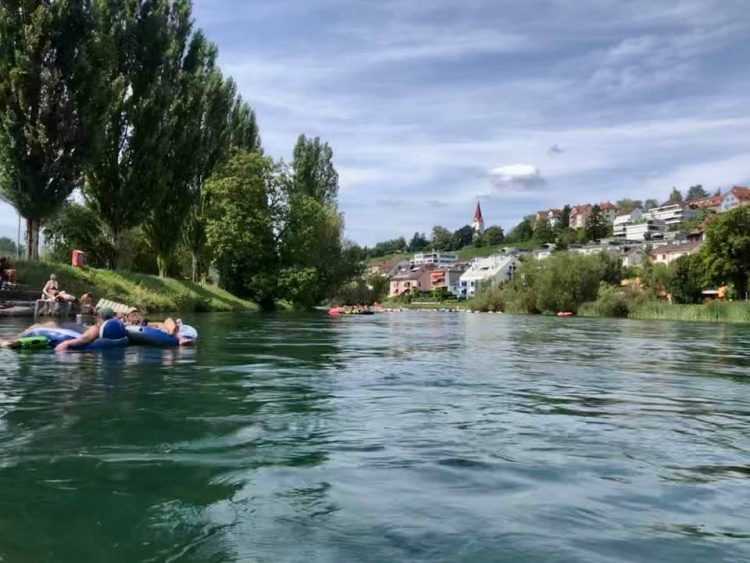 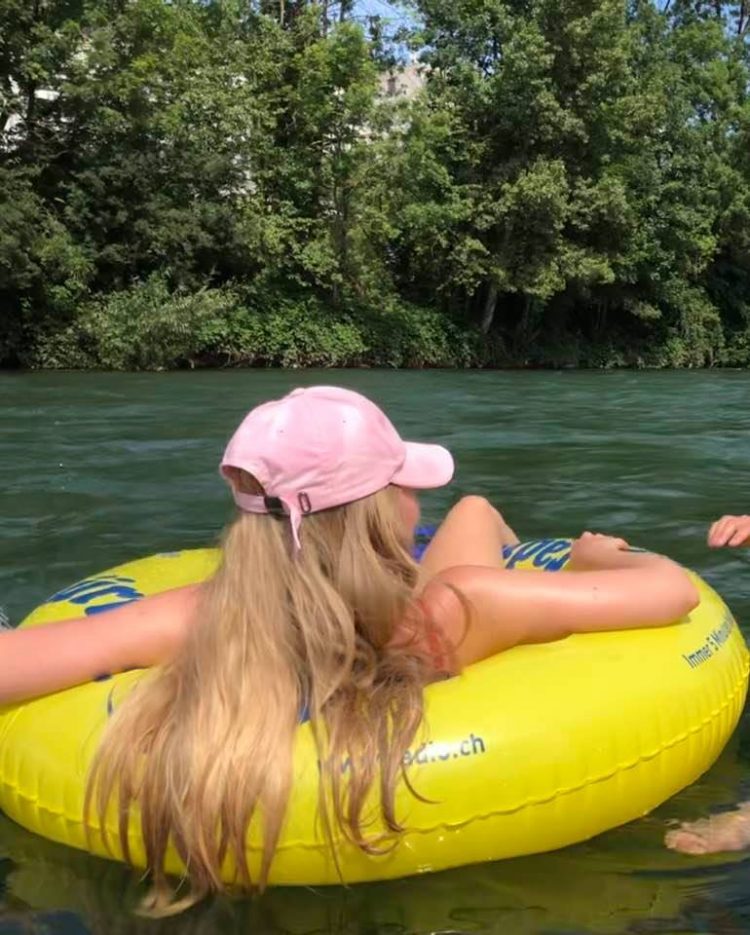 Getting Out Just Before The Weir

At one point just before the weir you HAVE to get out – and there are lots of signs telling you to do this. You simply hop out with your inflatable and walk a short distance past the weir and get back in again. 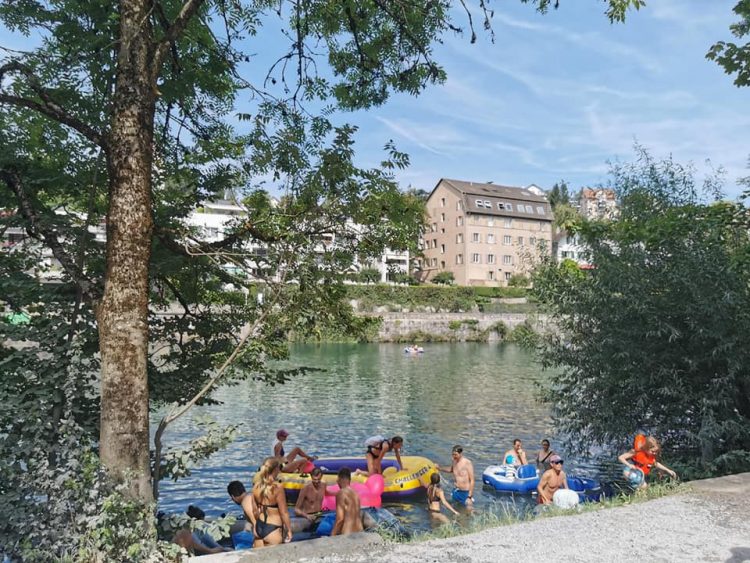 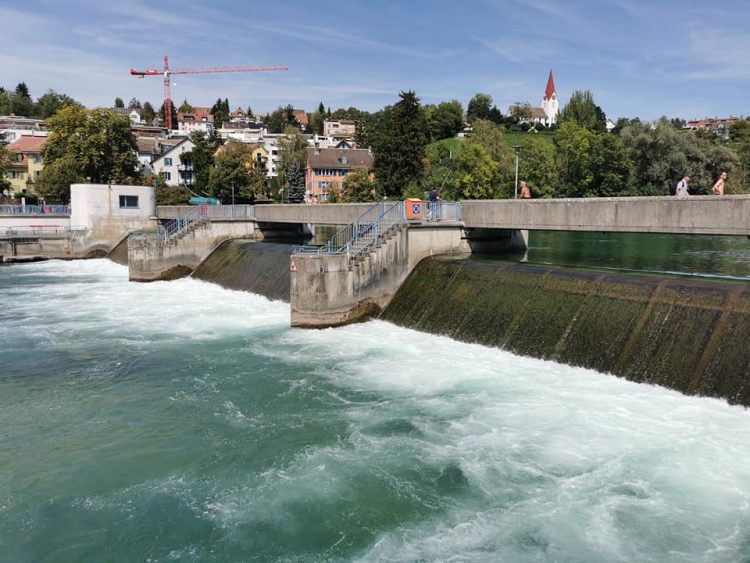 There are also plenty of signs showing you where to get out at the end as well. We got out at Glanzenberg but you can also get out a little further in Dietikon.

Getting Out At Glanzenberg Railway Station 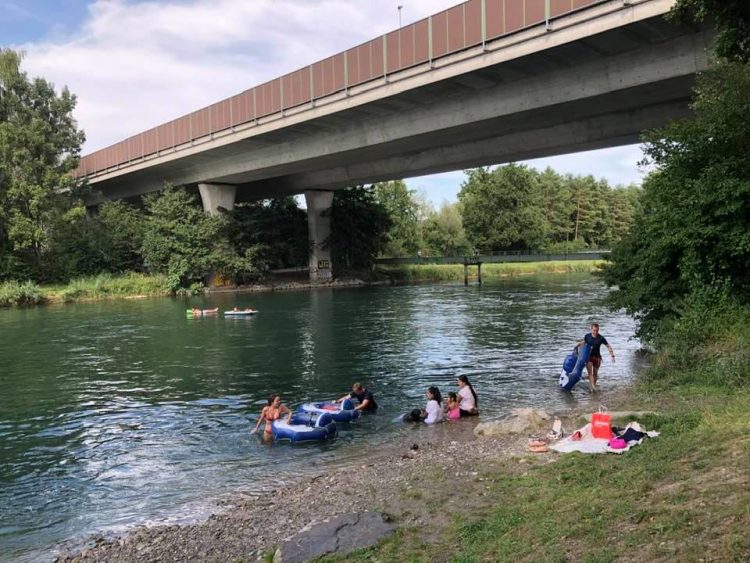 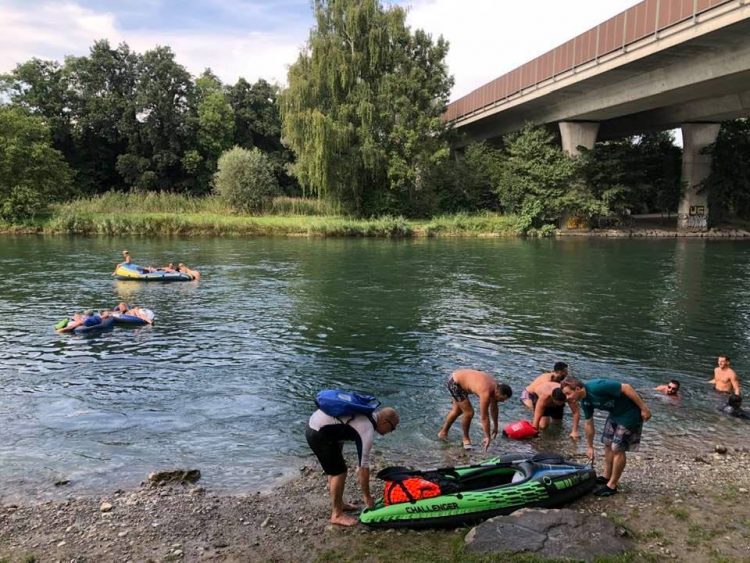 We had great fun. It’s a great Zurich experience – but I think you get more out of it being in a rubber ring or floating chair than in a dinghy – but it’s fun either way! 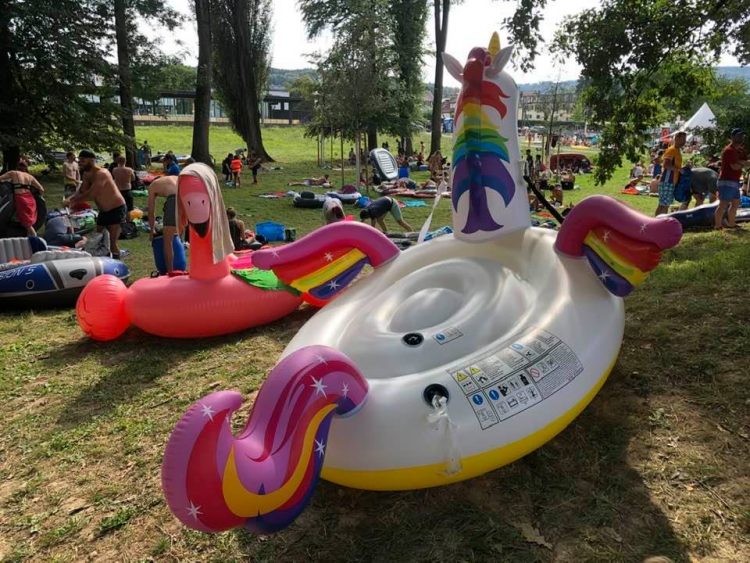 We saw all manner of inflatable boats on the river from lilos to floating chairs all the way to the ubiquitous flamingos – and do pack a dry bag to keep your phone and valuables dry. You can check out our tips just below. 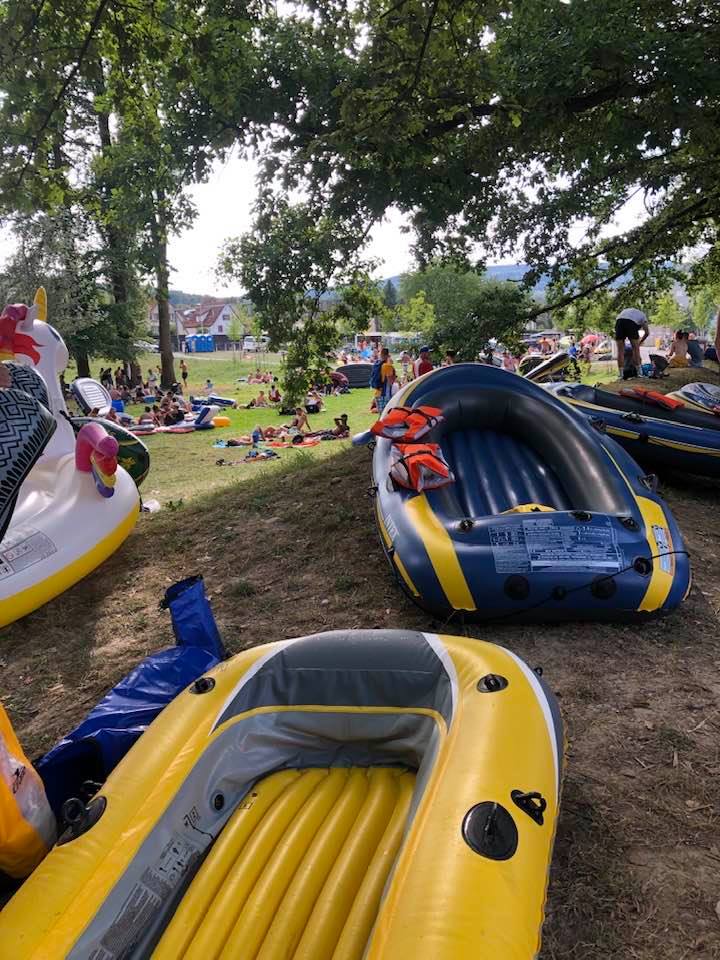 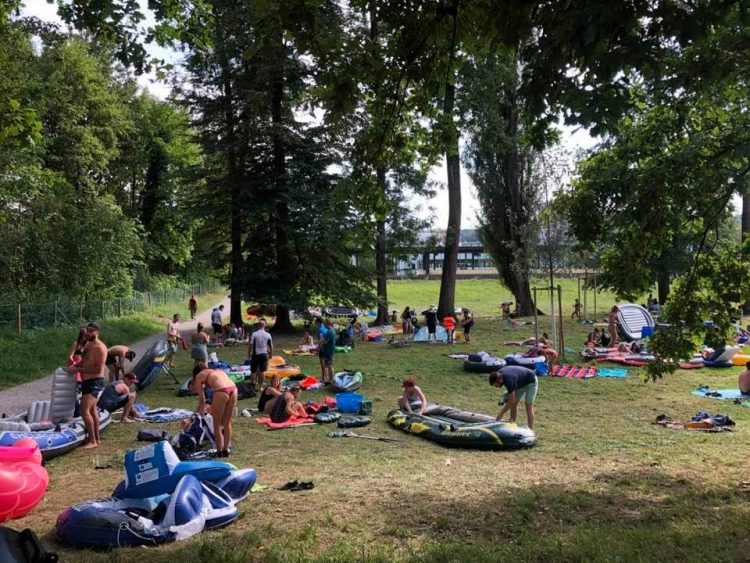 By Public transport From Zurich

Map Showing Where to Start and Finish 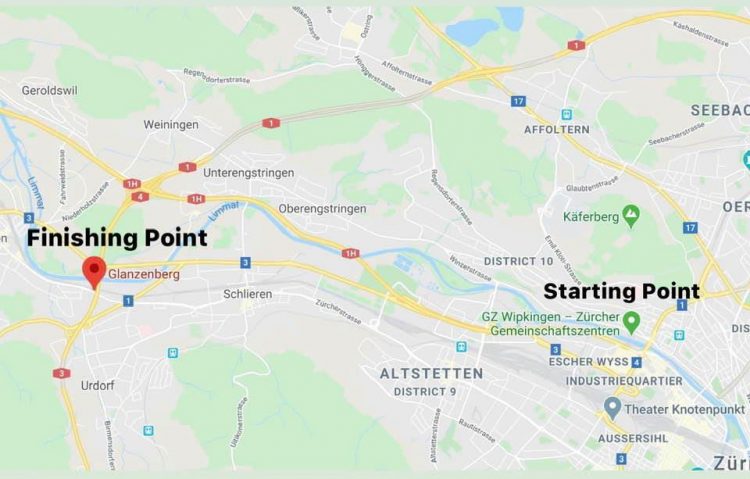 The river trip along the Limmat is a great experience to be had as it allows a new perspective of greater Zurich while cooling you down during the hot Summer days.

Before You Set Out  – Good To Know

In Summer 2021 the Stadt Polizei made some safety announcements about things you need to do before setting off on your rubber dinghy or inflatable. They are asking that all beach boats and inflatables be clearly labelled with your name and address and telephone number (you can request their label stickers here – scroll down right to the bottom of the page). They also now state that on rivers you need to have a life vest with collar with a minimum buoyancy of 75 Newton for each person on board. The police recommend for safety reasons that the life vests be put on before the ride. 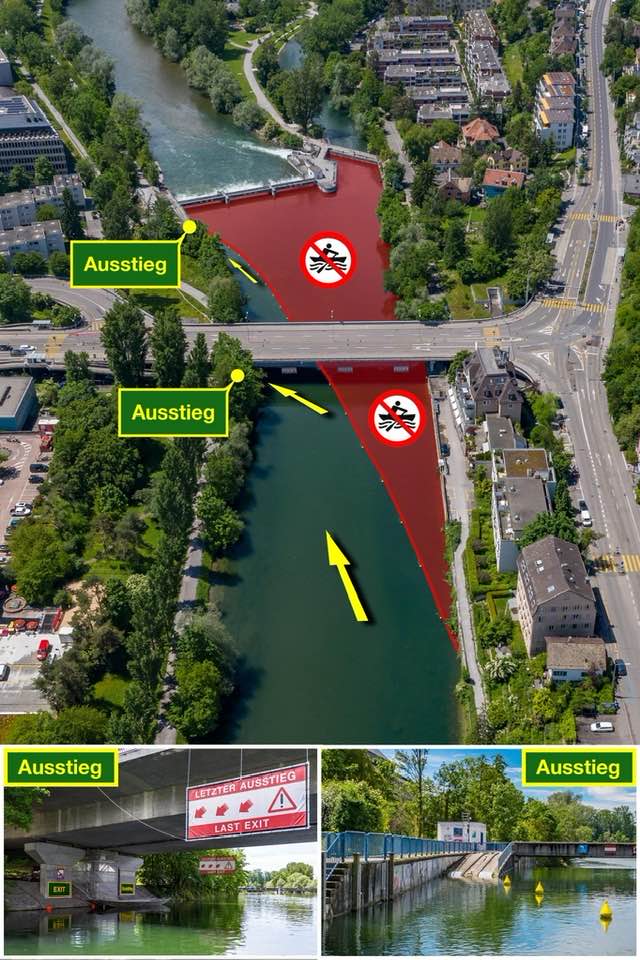 In addition, because of accidents occurring close to the Höngg weir, this area close to the opposite bank to where you get out is now classified as a “no go zone” and you will be made to keep to the left in this area.

Please see the details of all the Police rules and regulations here.

You can see the rules and regulations of the  rivers here.

More information on inflatables on the river in Switzerland can be found here.

Projektil Illuminated Art in Solothurn with Hodler and Klee

Are you aware of any place where you can rent an inflatable boat? Thanks!

I’m sorry I don’t know of any places to rent – but yo can pick up an inflatable for around CHF 20 – 30 if you look in Just or Interdiscount.

Hi, how do we pump the tubes? Are there pumps at the park or do we bring our own? I don’t have any, would people be open to sharing theirs?

Hi you have to bring your own pumps – though I have often lent mine out when somebody has needed it. If not can buy them quite cheaply at most hardware / cycle places. 🙂