With Three Options To Choose From 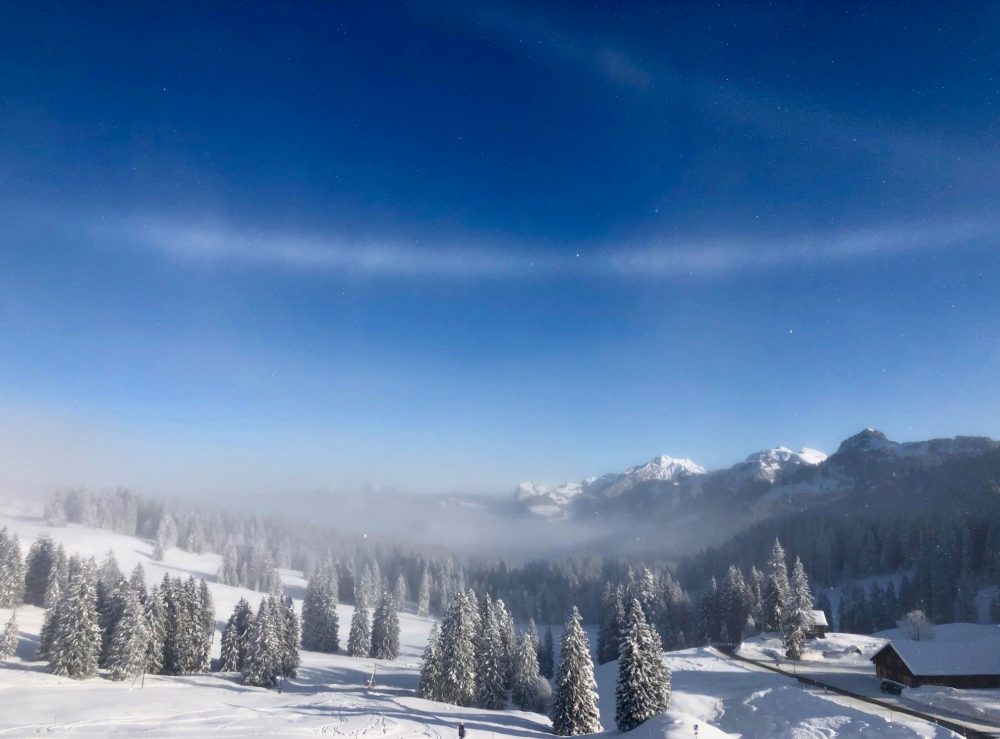 Ibergeregg in canton Schwyz gives you great access to snowshoe and winter hiking trails without having to use mountain transport. The road up from Oberiberg is winding and narrow so it is worth checking the road conditions before you travel. There is metered parking by the restaurant at the top of the pass. There is no public transport access during the winter. The Passhöhe restaurant is currently shut but is offering a limited take away service – check here for the latest details. 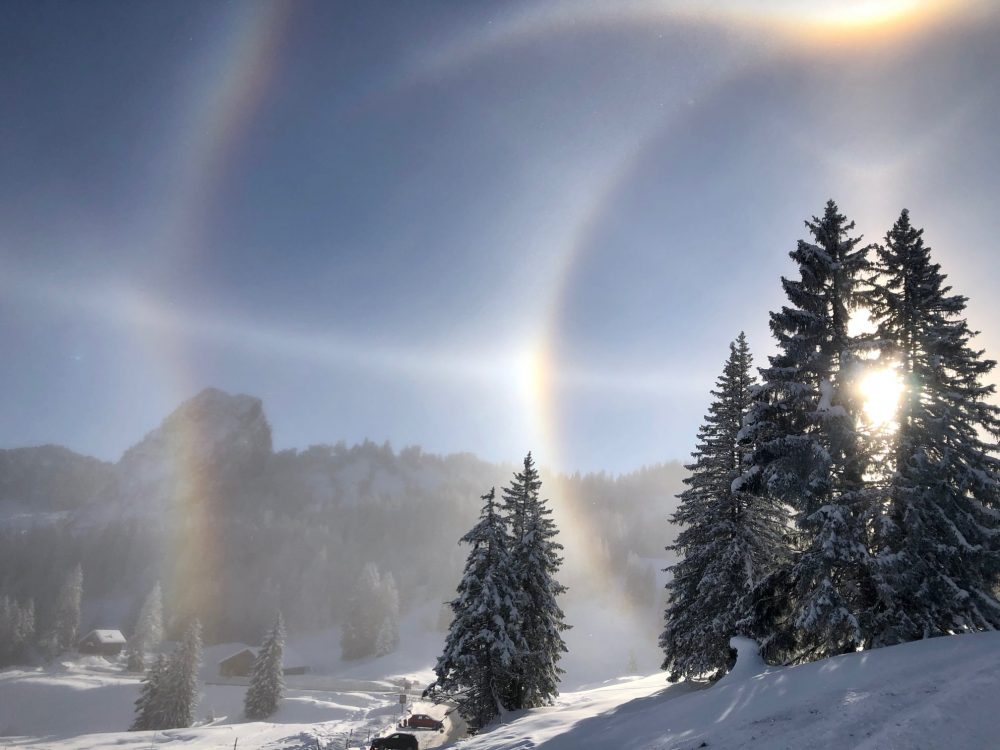 The brilliant sunlight and light snow created an amazing effect

Three Options for the Hike – Short, Medium and Long

The network of snowshoeing and winter hiking paths largely intersect at the Ibergeregg pass. Snowshoe trail 819 offers wide scope in terms of length and ascent. You could do a short circuit of 4km with 240m ascent and descent taking around 90 minutes. A mid route (the one we did) is about 7.5km, 475m ascent and descent and took 3.5 hours. Finally, you could extend the mid route to take in a loop to the Illgau cable car which would make 9km with over 540m ascent and descent taking around 4.5 hours. This flexibility gives you a chance to pick a route that suits the weather, your abilities and time available. 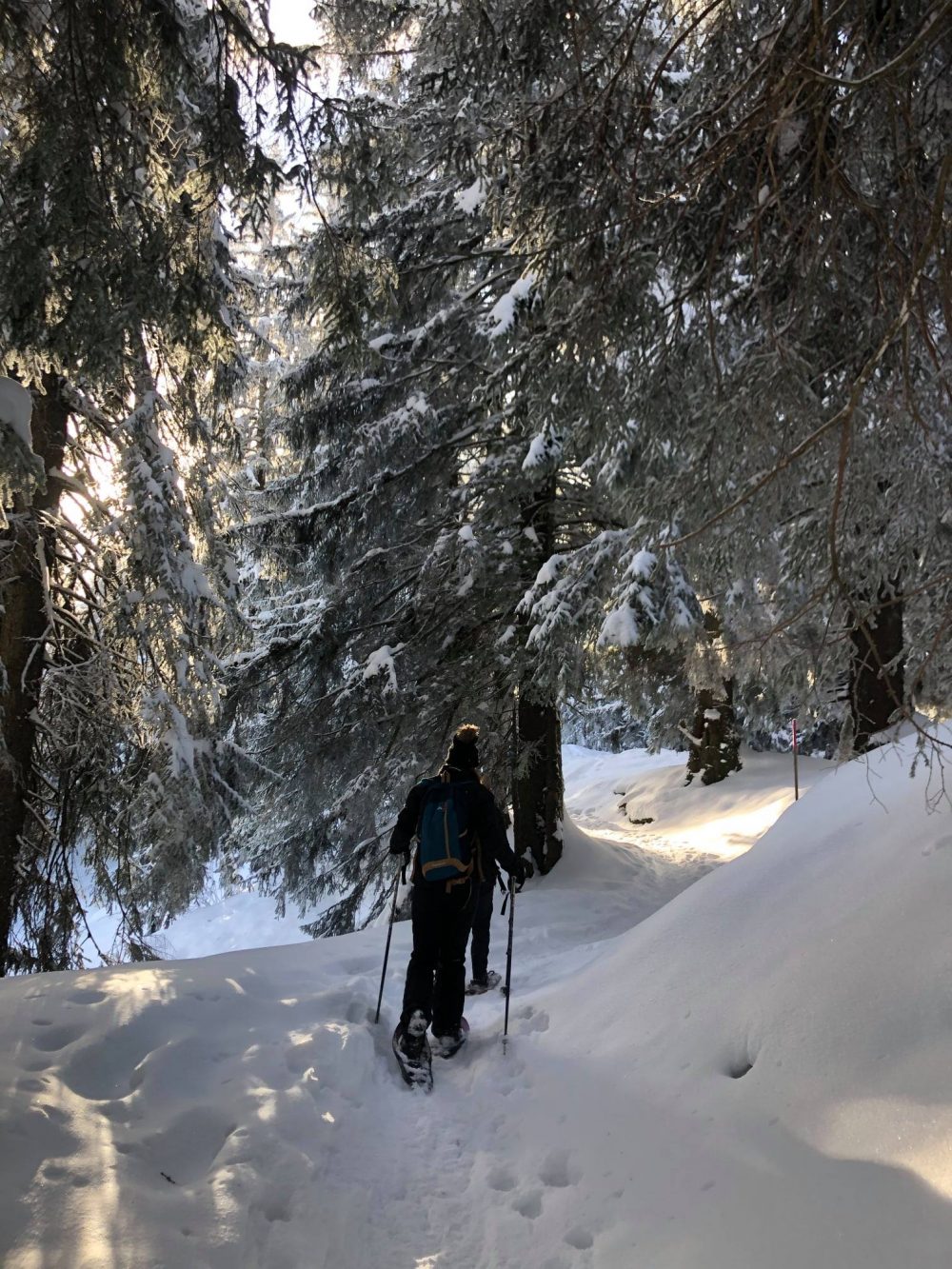 Heading up through the trees on the first climb

All Routes Begin With 100m Climb

All the routes start the same way, with a 100m climb up to the ridge. The day we went we left Zurich in grey cloud, drove up in the breaking cloud and parked in light snow. As we started to hike the sunlight created beautiful patterns in the falling snow just before we entered the woods. 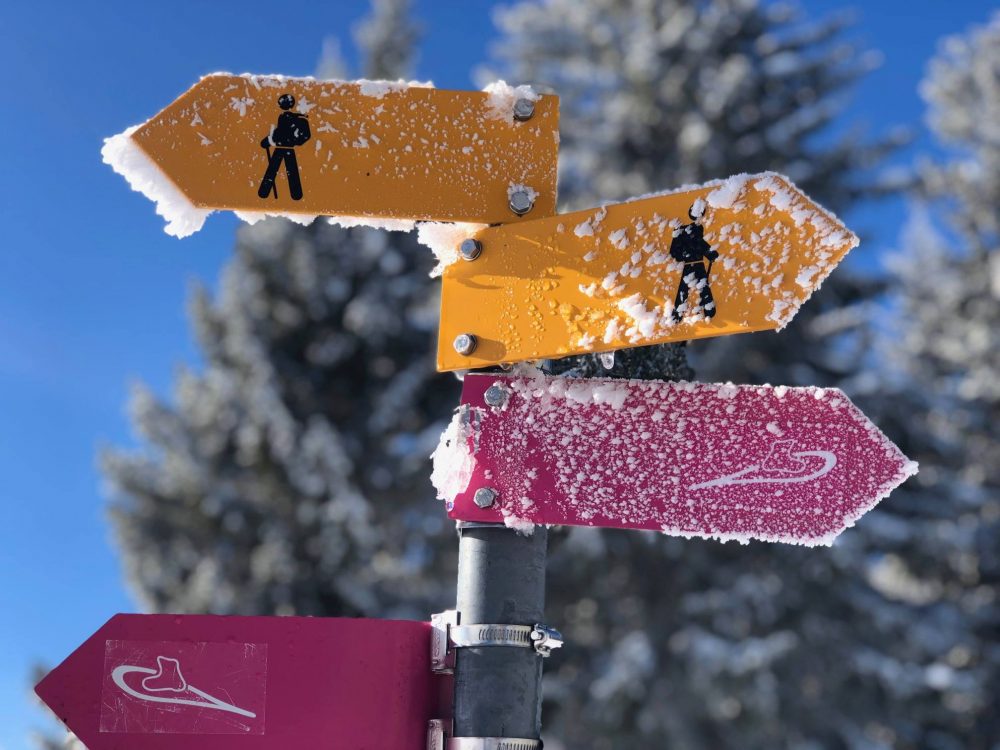 The route is well signposted

At the ridge at 1515m we burst into brilliant sunshine, clear blue skies and a spectacular view onto the sea of cloud over the Vierwaldstättersee. Snowshoeing at its best – a steep but manageable climb and then views that are out of this world! 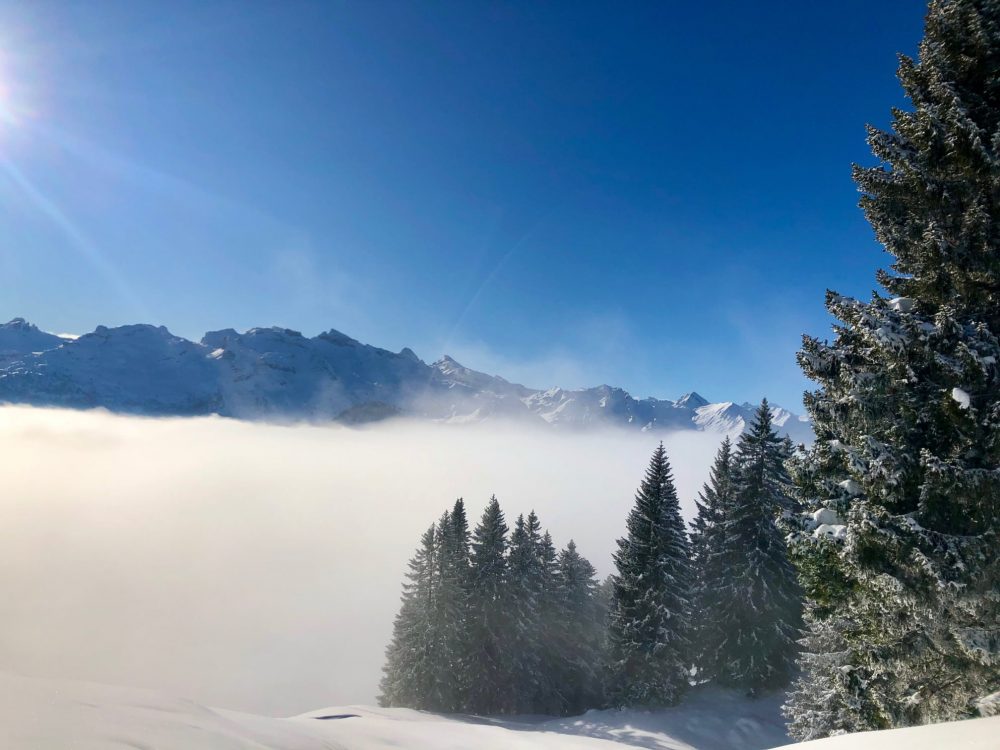 We reached the ridge and emerged to find an amazing view

The path continues along the ridge for a kilometre with views to your left of the Hudelschijen peak and the Hoch y’Brig ski area beyond and to your right out over the sea of clouds – or what I imagine is a stunning view of Stoos and the Vierwaldstättersee in clear weather. 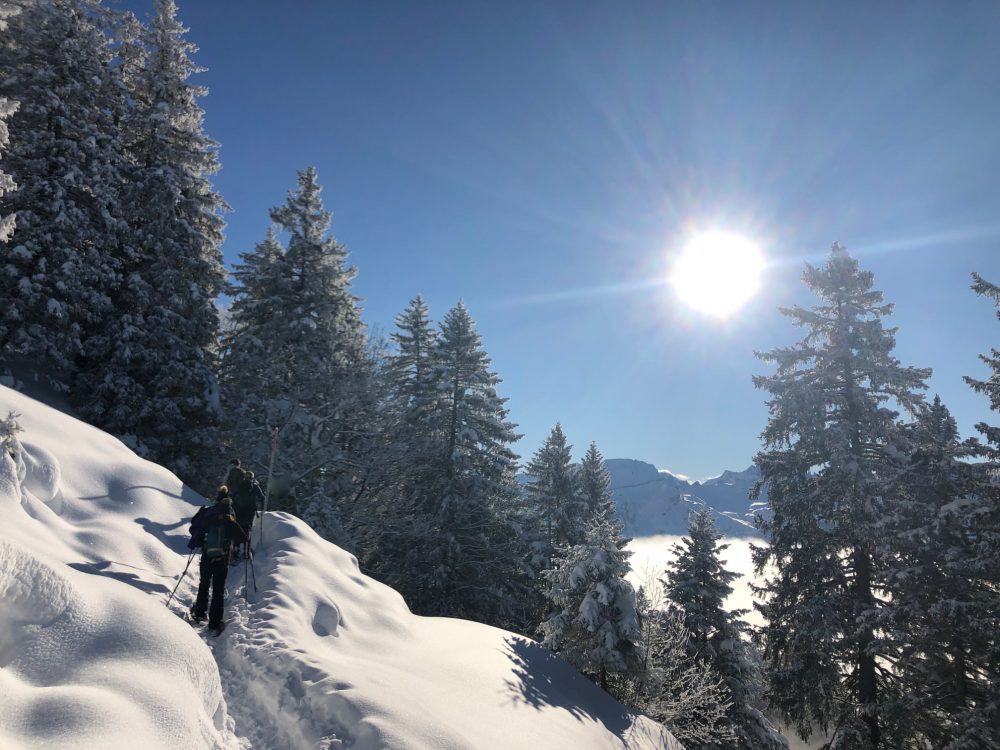 The path skirted the edge of the cloud

Choose Your Path at End of Ridge

At the end of the ridge you have a choice. You can turn around and retrace your steps 800m to where the path splits, this time taking the left fork descending 60 meters to a farm. At this point turn right and follow the path back to Ibergeregg. The route heads down gently before a final slight incline to reach Ibergeregg. 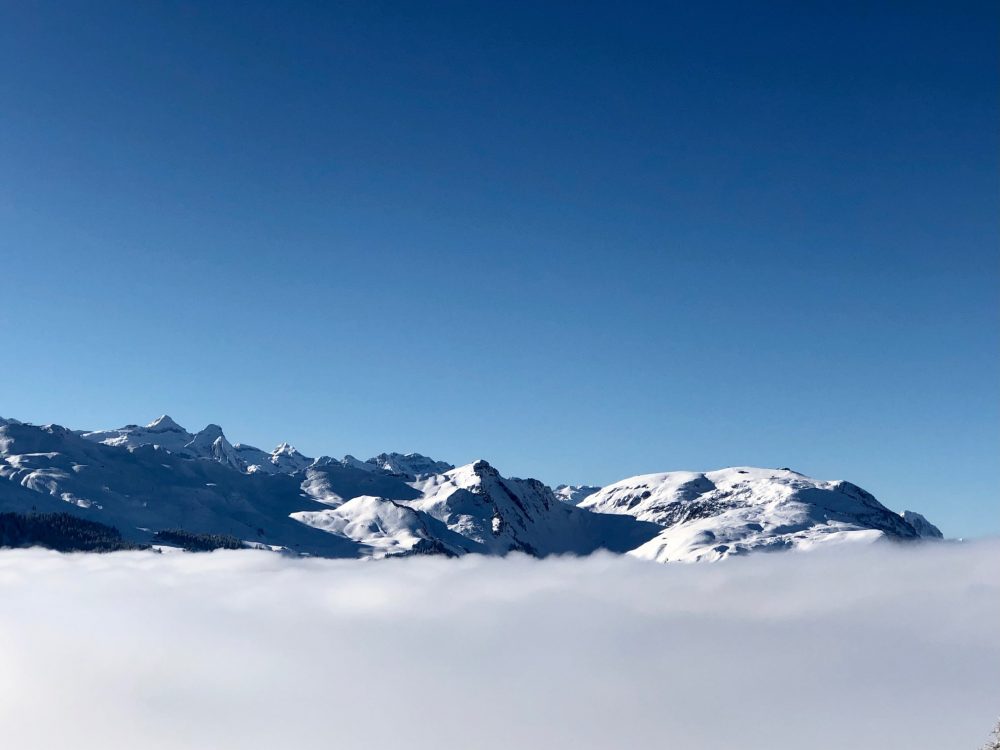 Stunning views over the sea of cloud 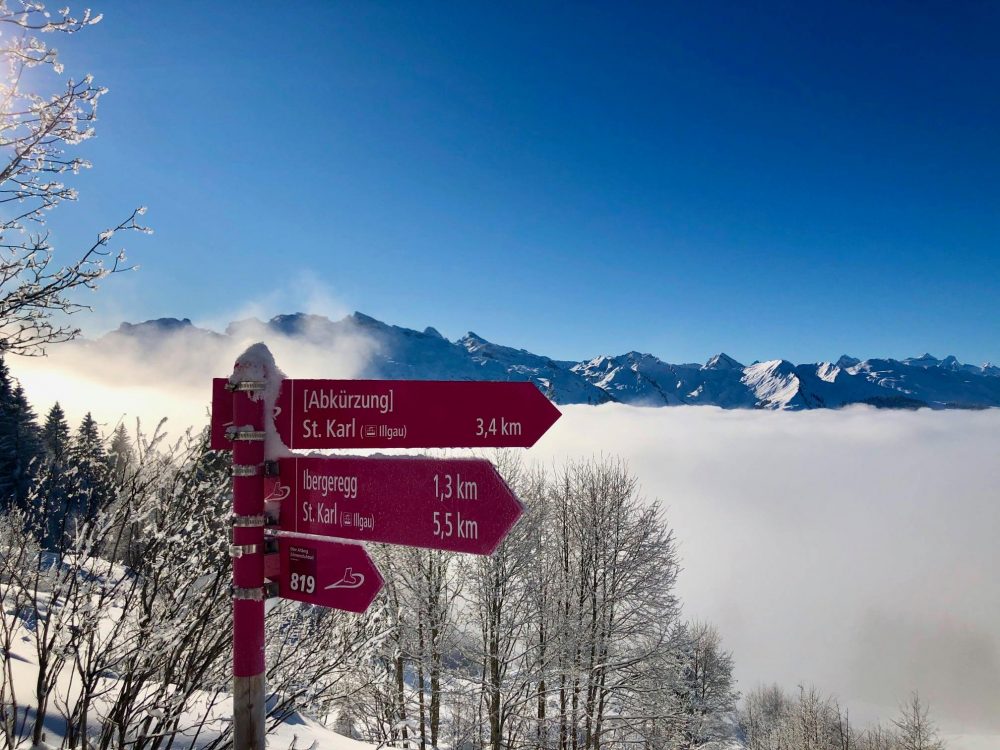 Marking the return route for the shorter tour 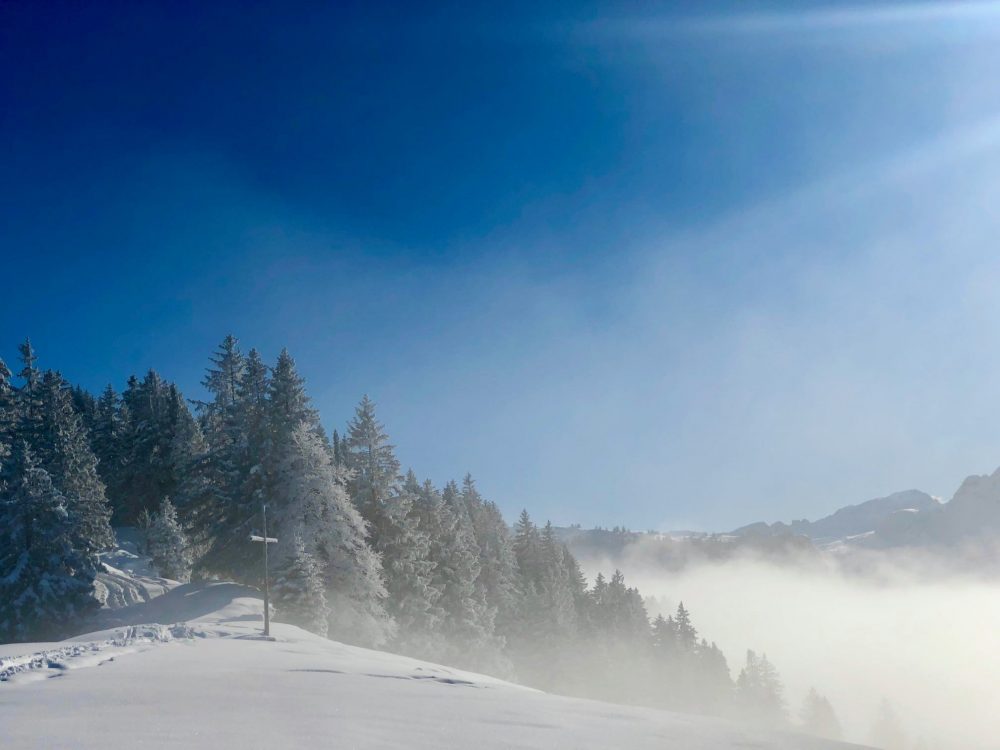 It is worth going to the end of the snowshoe trail on the ridge to get the full views. There were ski tourers here going on into Hoch Y’Brig but the snowshoeing trail turns right and heads downhill. 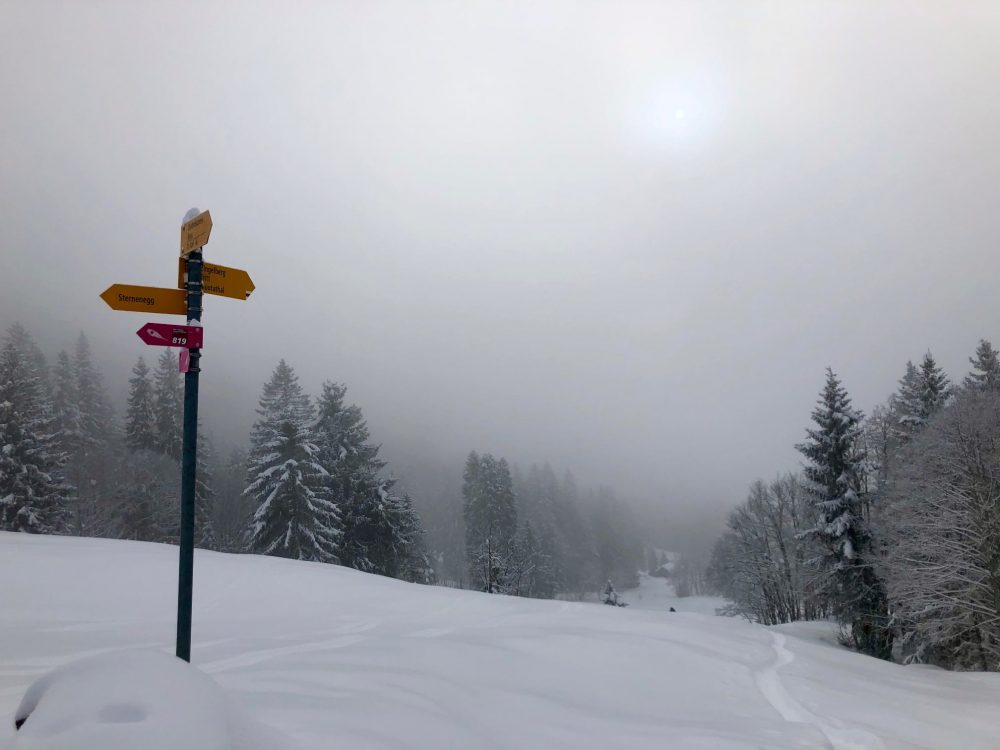 Deep snow but the paths were still well signposted. It is sensible to spot the next marker before you move on.

Alternatively, for the mid and longer length snowshoe trail the path turns right off the ridge and you descend, at times quite steeply. There was a lot of snow on this part of the trail in December but the path is clearly marked with pink poles. There are two flights of steps which were tricky to navigate. The two schools of thought were trying to step down sideways in snowshoes or to toboggan down on your bottom. Neither way was perfect! Once the path starts to level out it crosses a couple of streams – take care where you step. 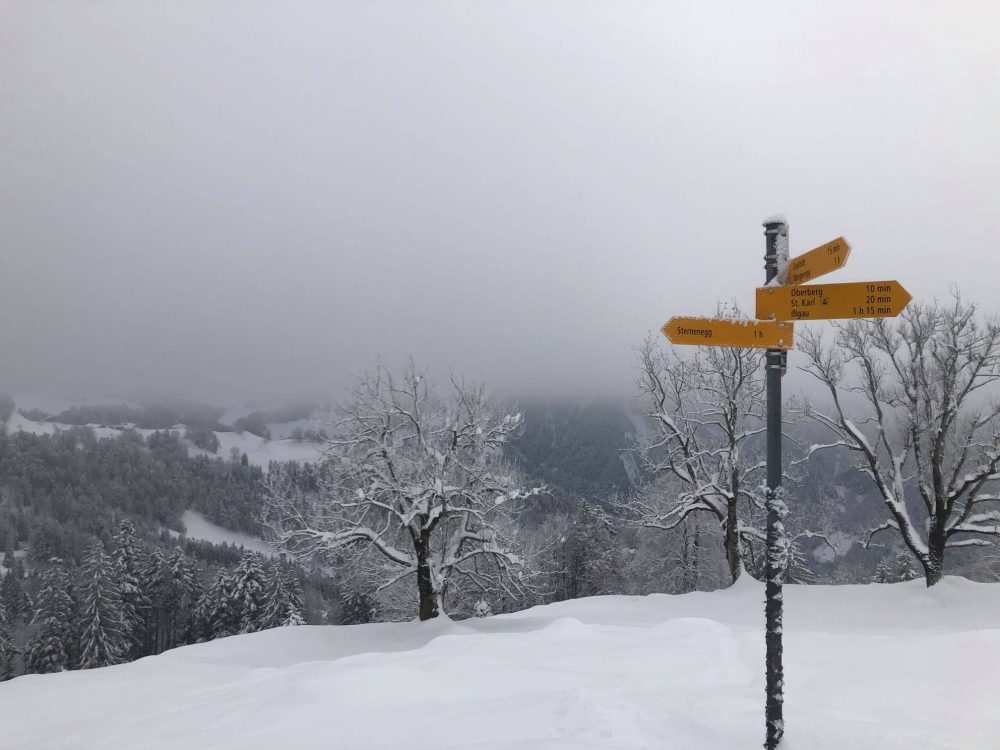 At this point we decided to head back uphill and leave the bottom loop for another day. 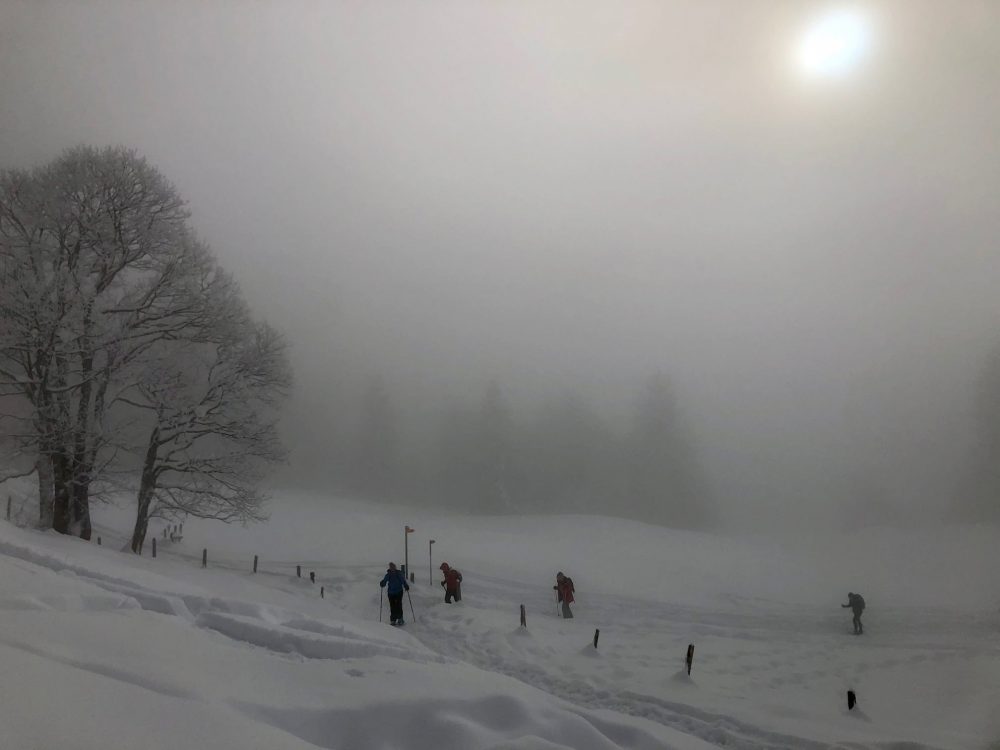 Starting the climb back up in the eerie half light

Unfortunately we did this section of the route in the cloud. At Chaltenbrunnen we could have gone on to do the lower loop but time pressure, and the fact that it was all in the cloud, meant that we headed right and started to climb back up the slope. At the farmhouse at Ober Altberg we should have turned left and continued that route back to Ibergeregg, but we missed it and followed the marked trail up the ridge back to our original path. This turned out to be a lucky mistake as the cloud had risen during our hike, but we did finally break back into the sunshine at the ridge which gave us one final amazing view before retracing our initial steps and heading back to the car. 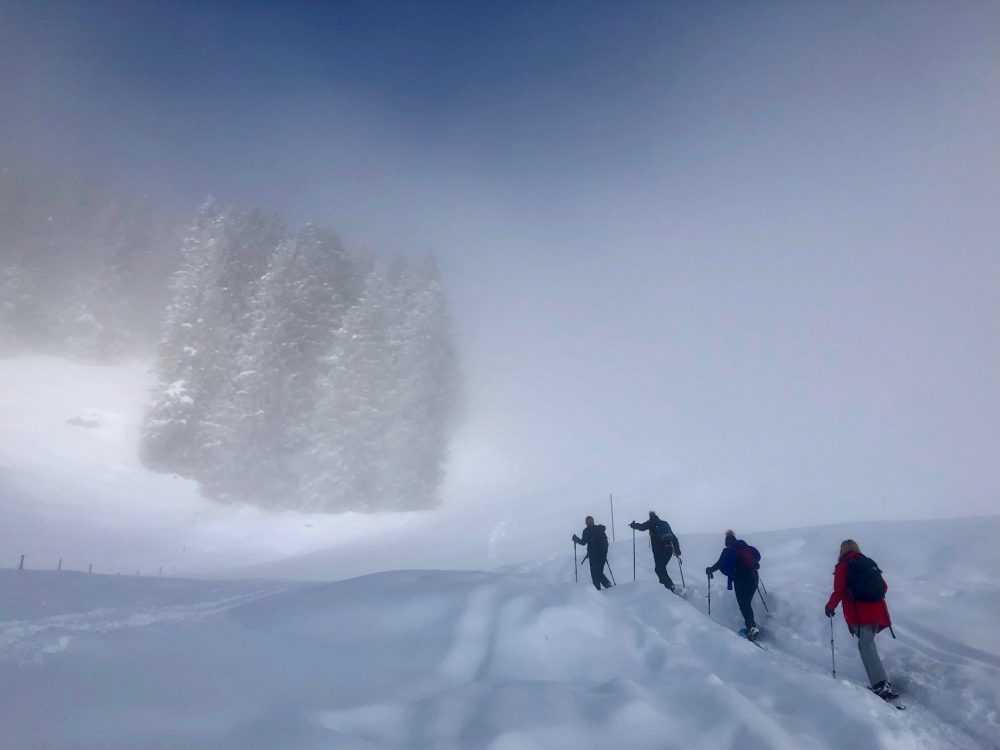 Almost breaking back into the sunshine. 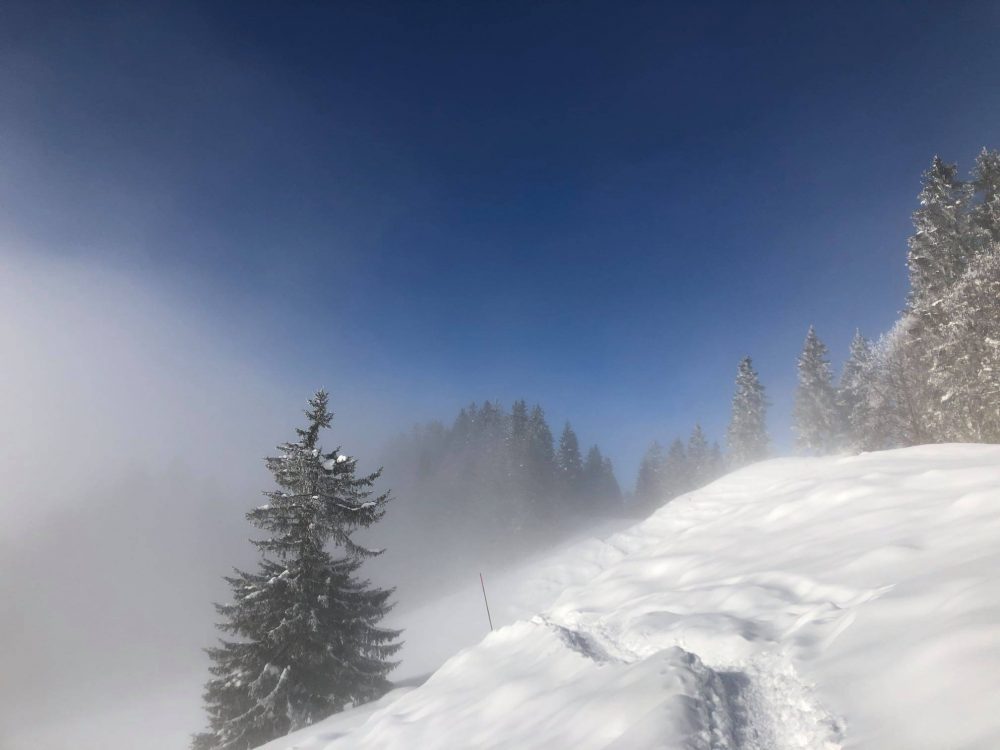 Back up to the ridge. 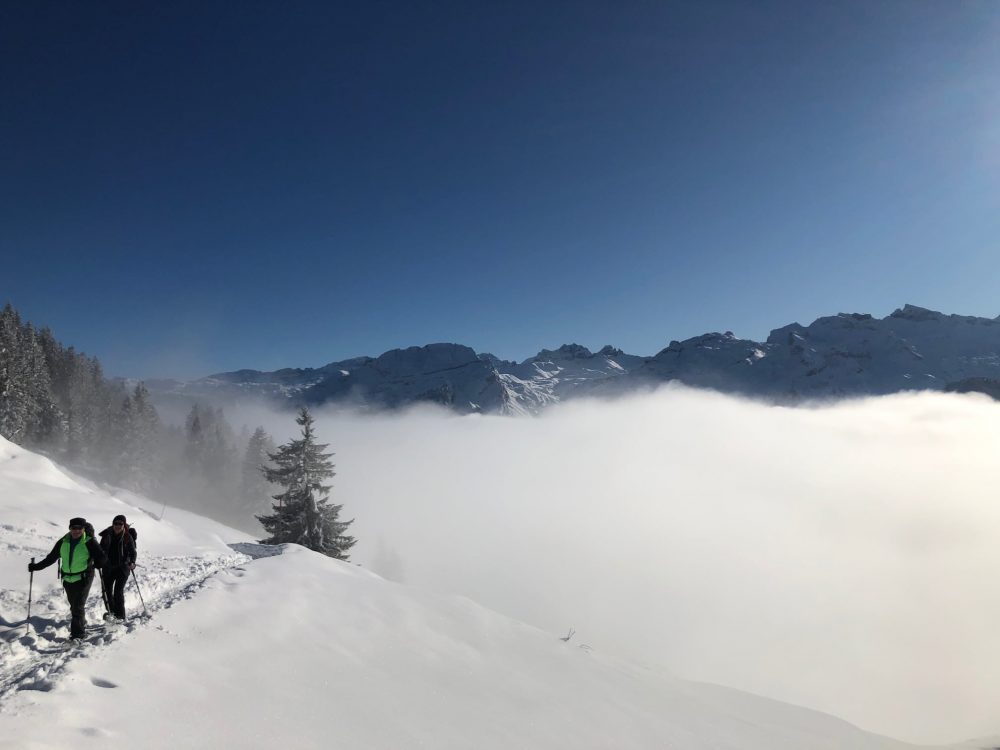 A chance for final views 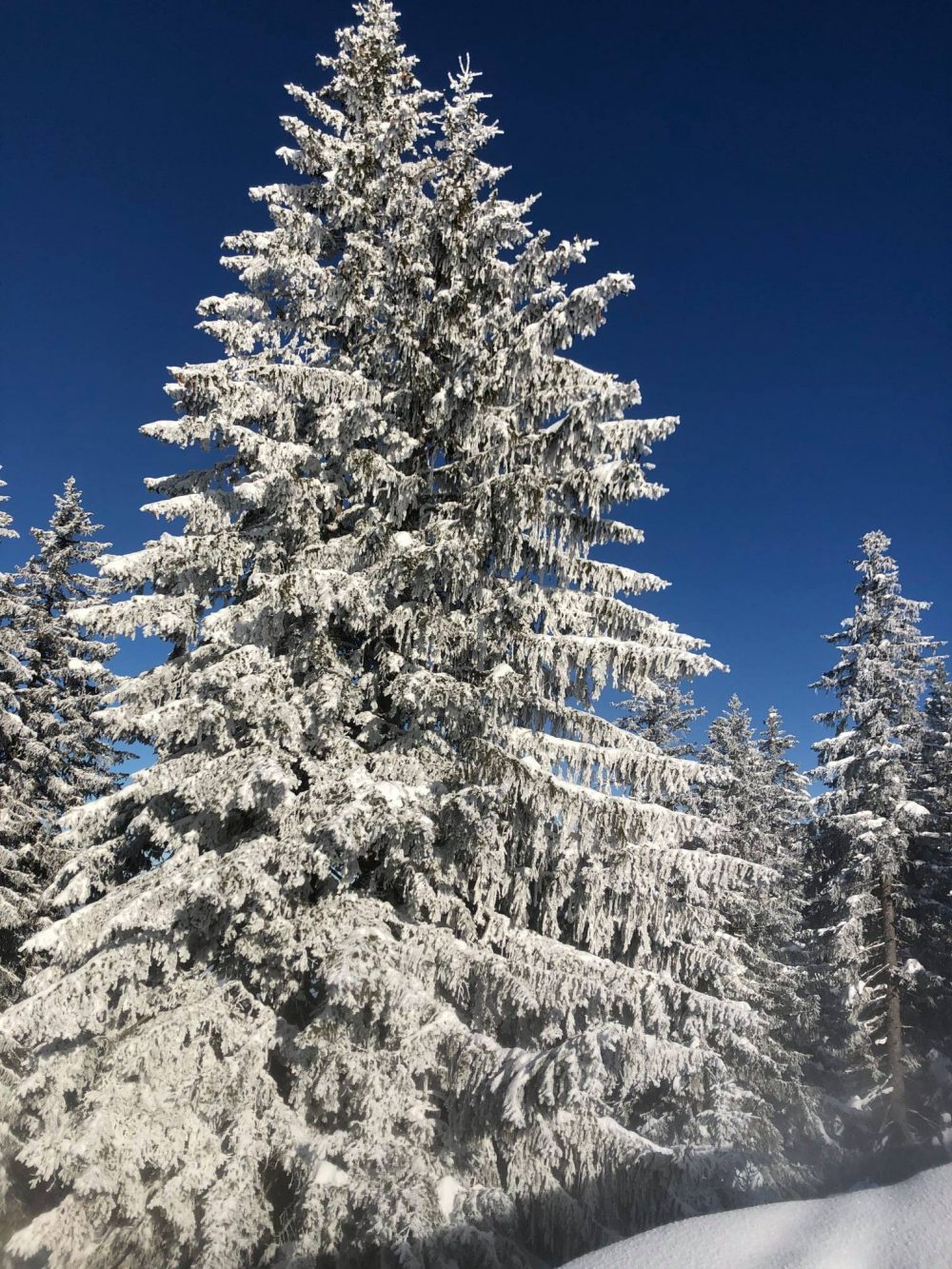 I look forward to completing the whole circuit one day. Snowshoeing is more physically demanding than hiking so the extra 2.5km and 130m ascent and descent should not be underestimated but in the right conditions and with enough time I am sure it is wonderful.

An alternative to starting at Ibergeregg would be to take the Illgau cable car. This would mean that the major climb would be done during the first half of the hike with the second half bringing you back down to the starting point.

Overview of the Snowshoeing Routes

View on the Switzerlandmobility map here:

The Mid-route – the one described here: 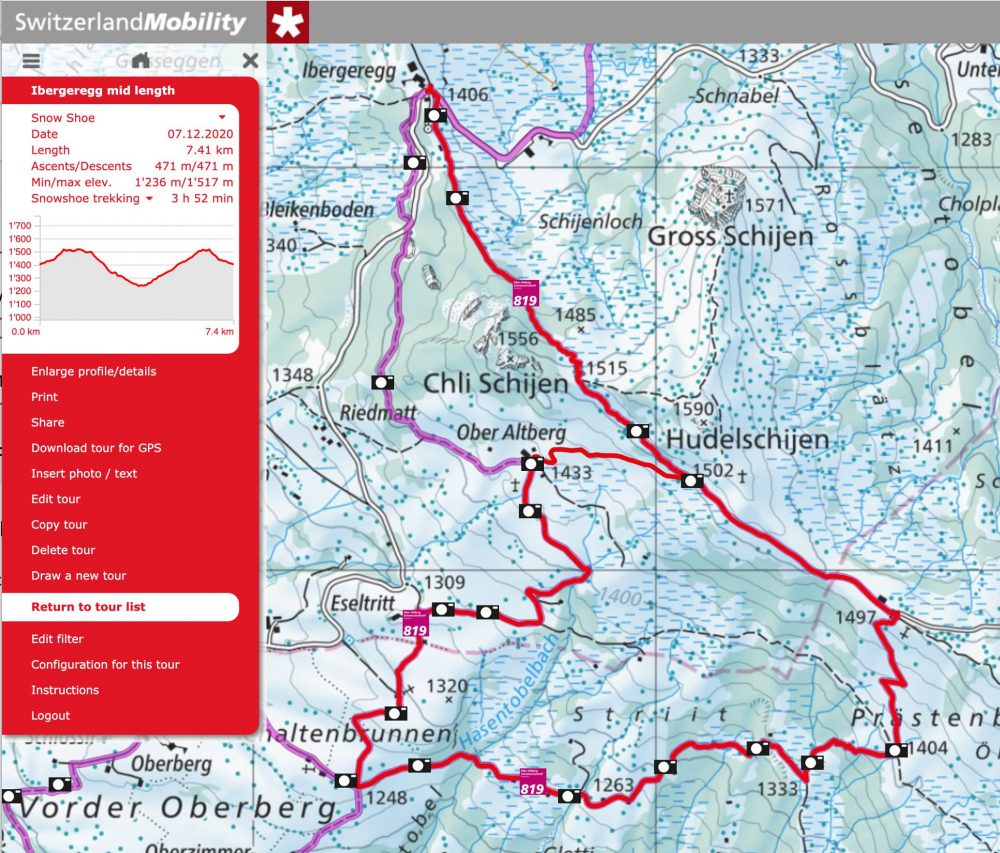 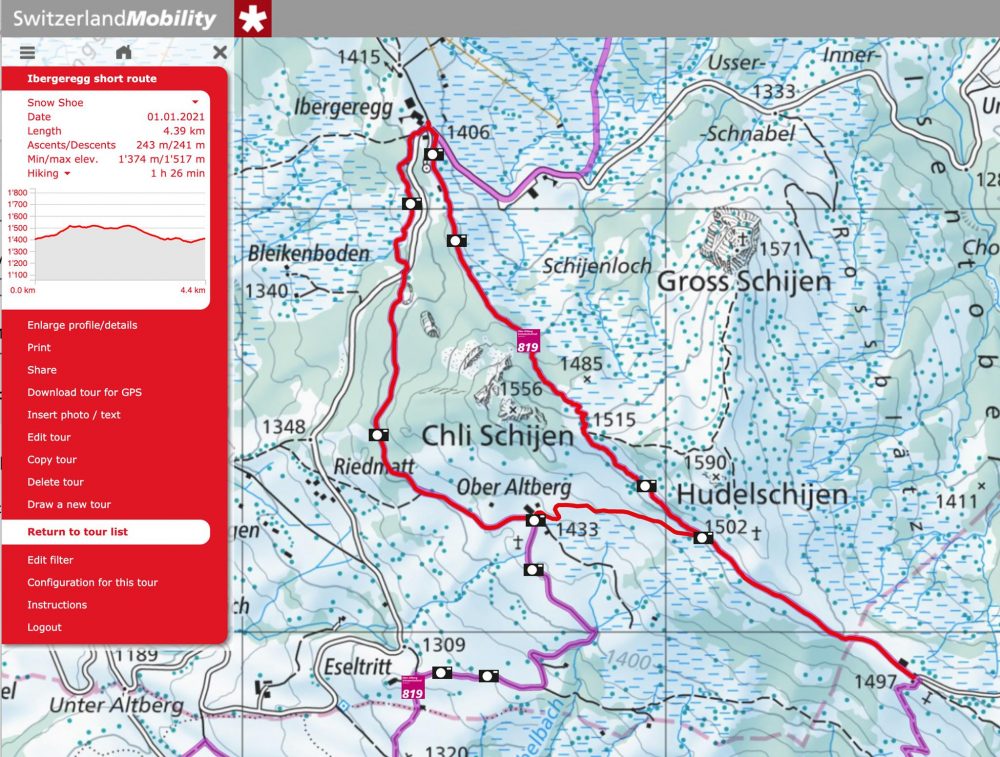 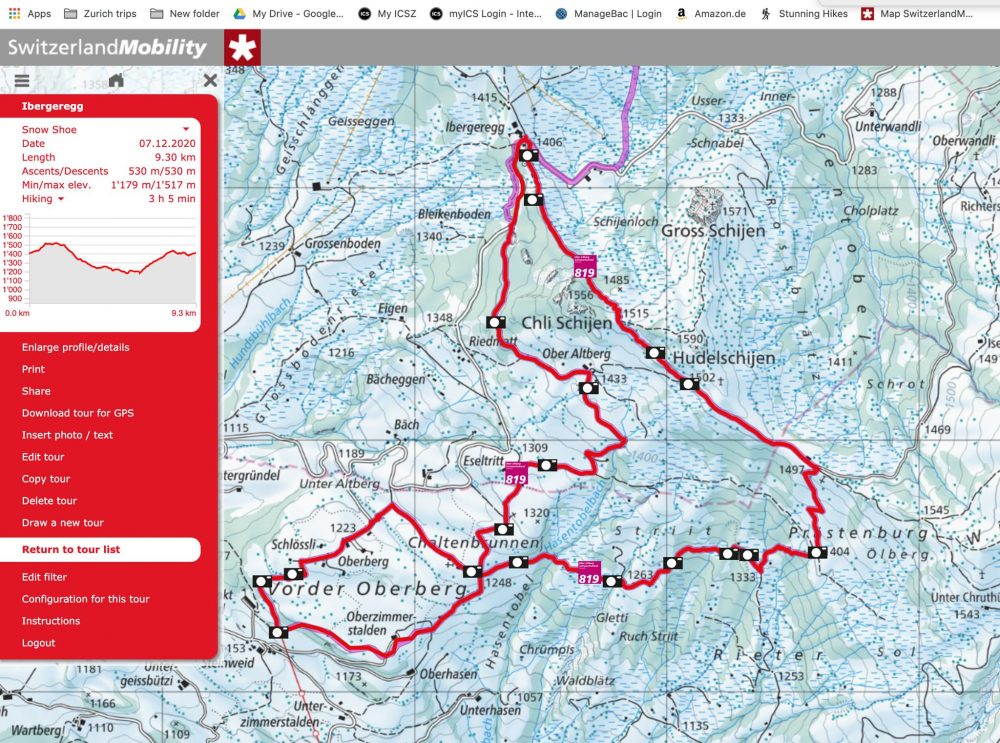 See details of the restaurant here.

A Scenic Winter Hike To Etzel Kulm in Schwyz

Marroni – One of the Top Winter Foods in Switzerland