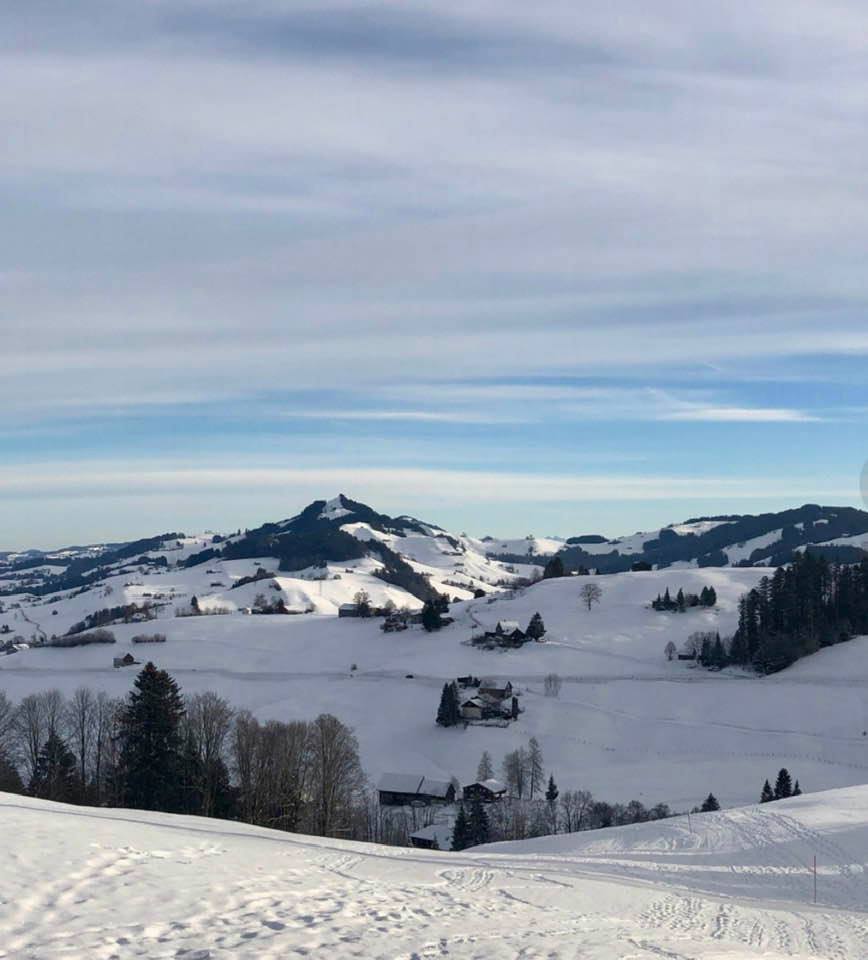 Snowshoeing Not Far From Zurich 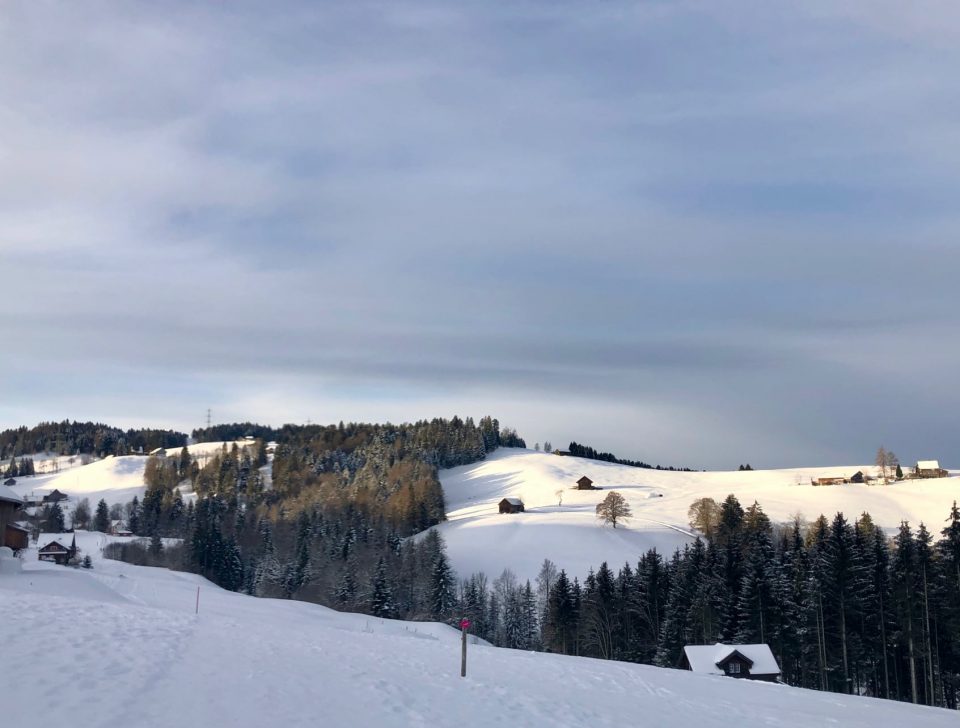 This snowshoe route starts in Hemberg, only about 1 hour’s drive from Zurich, but a hilly area often with good snow and great views over to the distant peaks of both Säntis and the Churfirsten range. 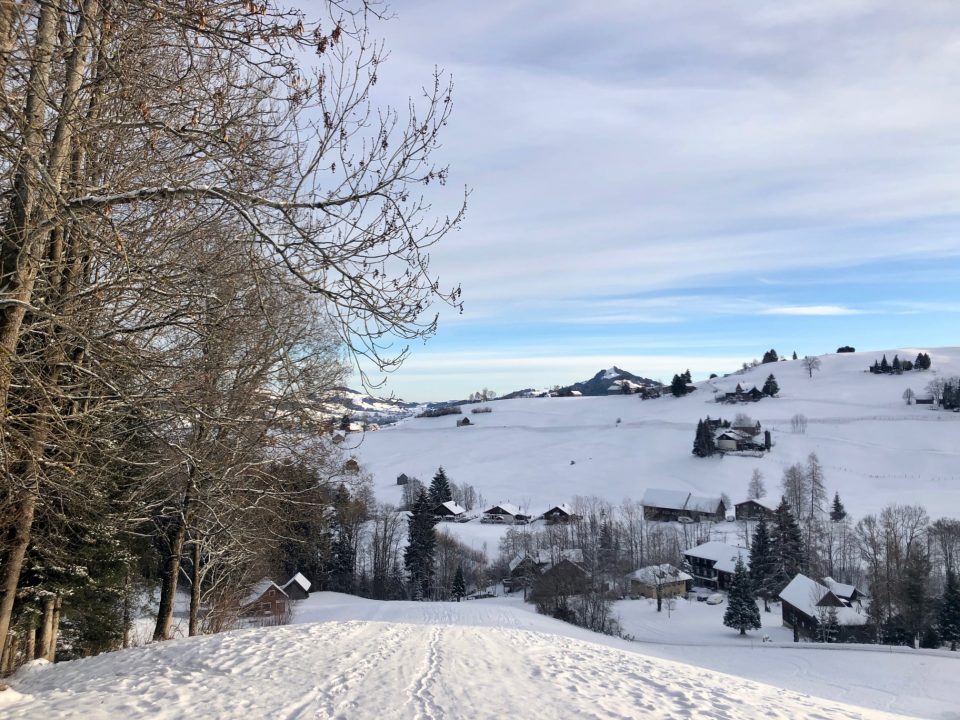 Looking back down the hill to Bad. This early hill is the only significant climb on the route 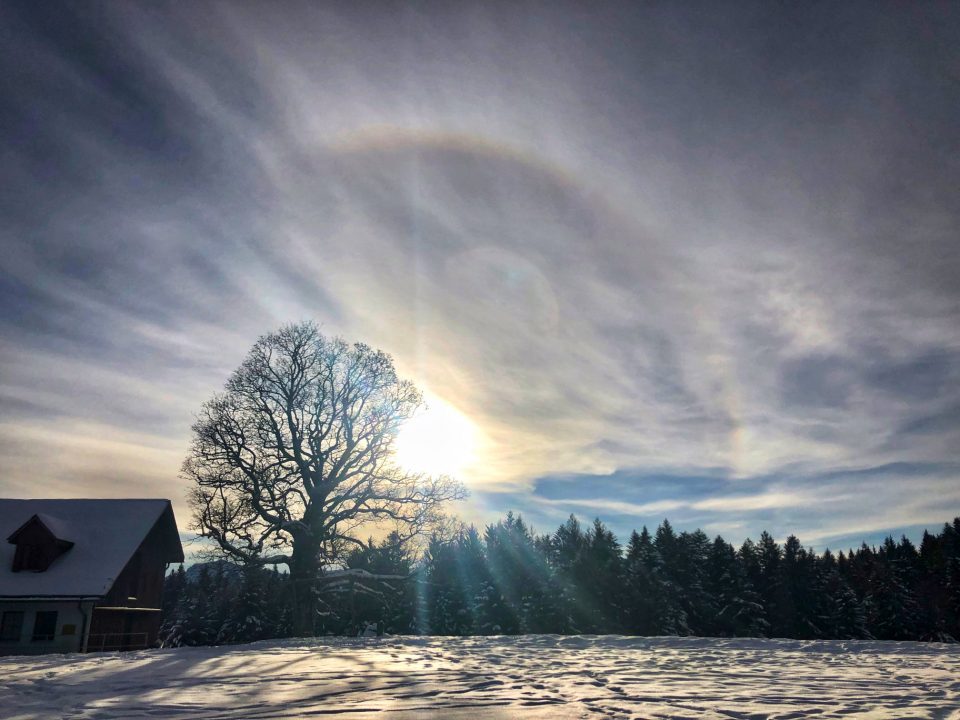 However, after the village of Bad the snowshoe trail heads up the only real climb, leaving the road and the other tracks and giving you your first glimpse of Säntis and a good excuse to stop, catch your breath and shed some layers! Towards the top of the hill the snowshoe track crosses the cross country ski tracks a few times before you enter the woods around Salomonstempel. 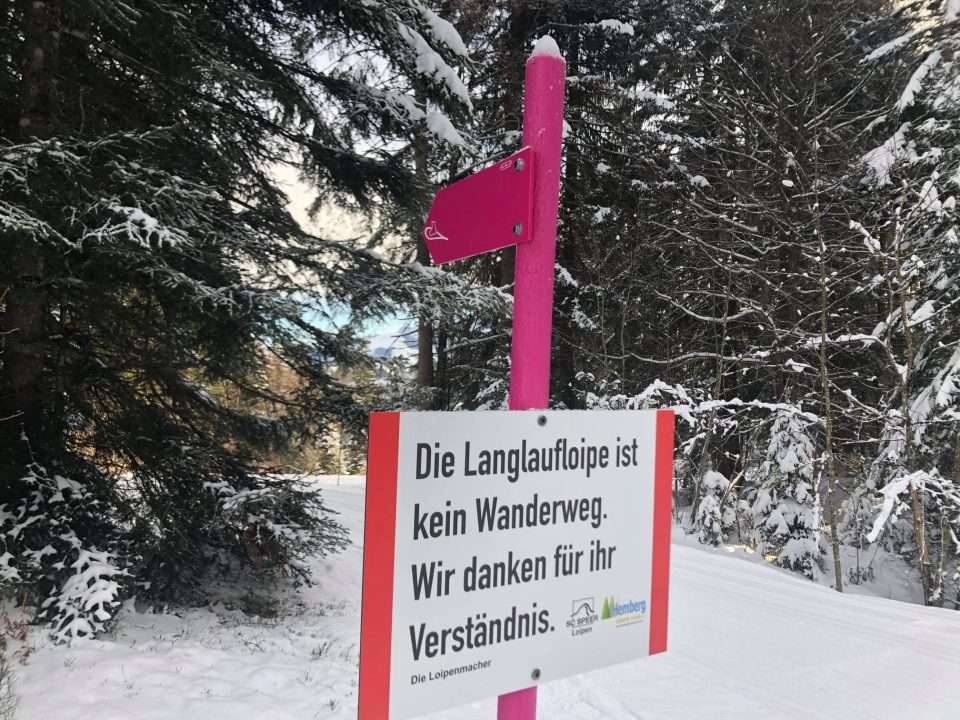 The snow shoe route is often close to or even crosses the cross country ski track.

By now you have gained most of the 300m and the rolling route through the trees eventually opens out onto views of the Churfirsten range.  You also meet another popular cross country ski track and just beyond the club house you cross the road and are greeted with the best view of the Churfirsten’s jagged outline. Descend through a field and take a sharp left up a footpath and into another wood. 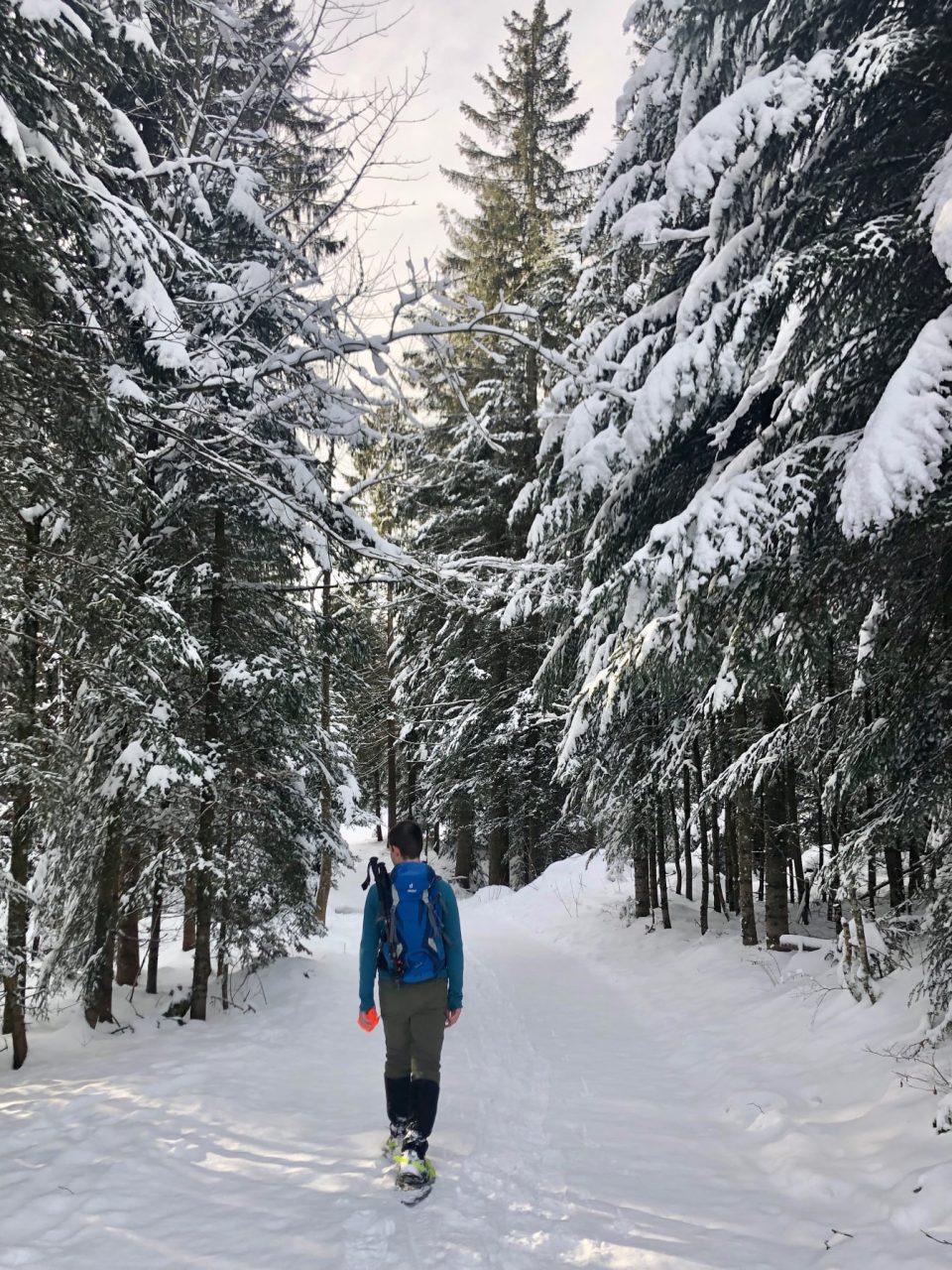 You briefly re-join the road before heading left to the top of a local ski run. Here are more well-placed benches to encourage you to stop to admire the views before skirting the nursery slopes and heading back down the ridge behind the ski hut and back down to Hemberg which quickly becomes visible in the valley below. 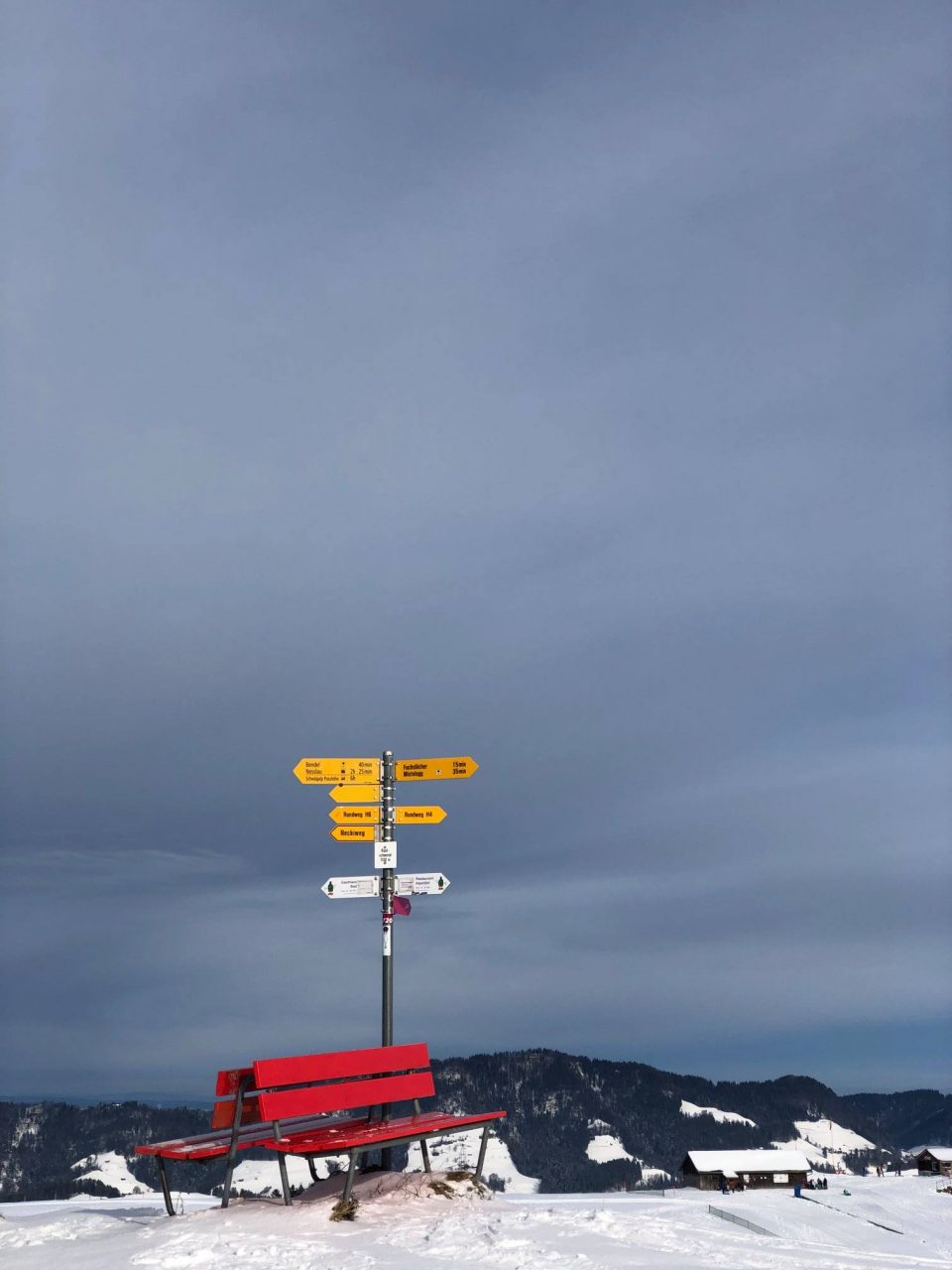 Benches at yet another viewpoint, this time at the top of the ski run

This is a short route which is not technically or physically demanding and makes a great beginner route or something when you only have half a day. 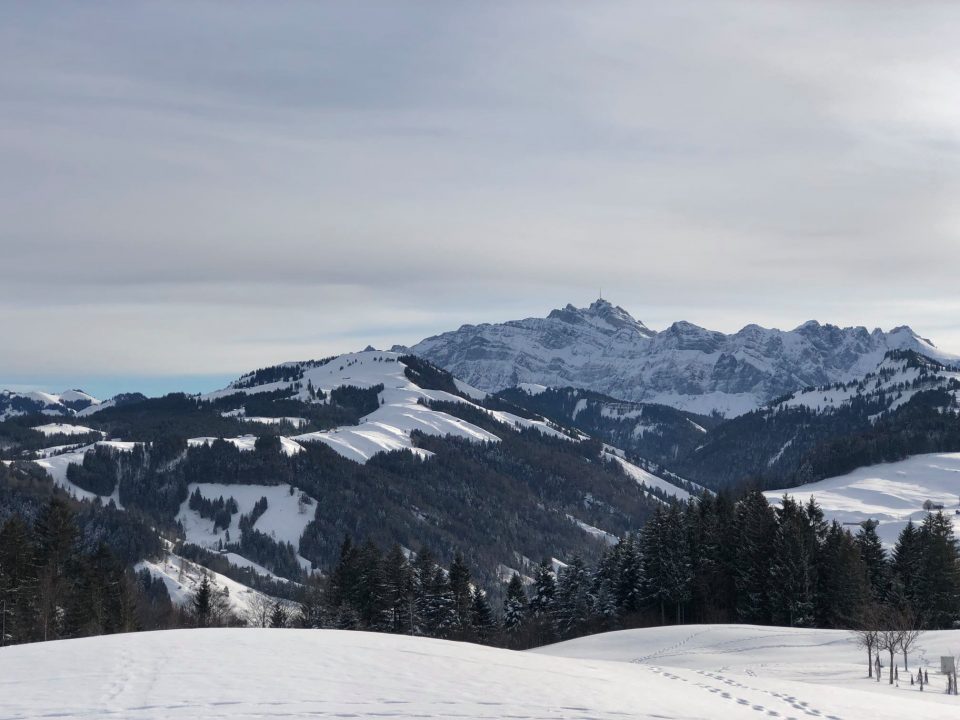 The views of the distant peaks are impressive so it is worth saving for a day with good visibility. There are no cafés on route, although the small ski station was selling hot drinks and sausages. 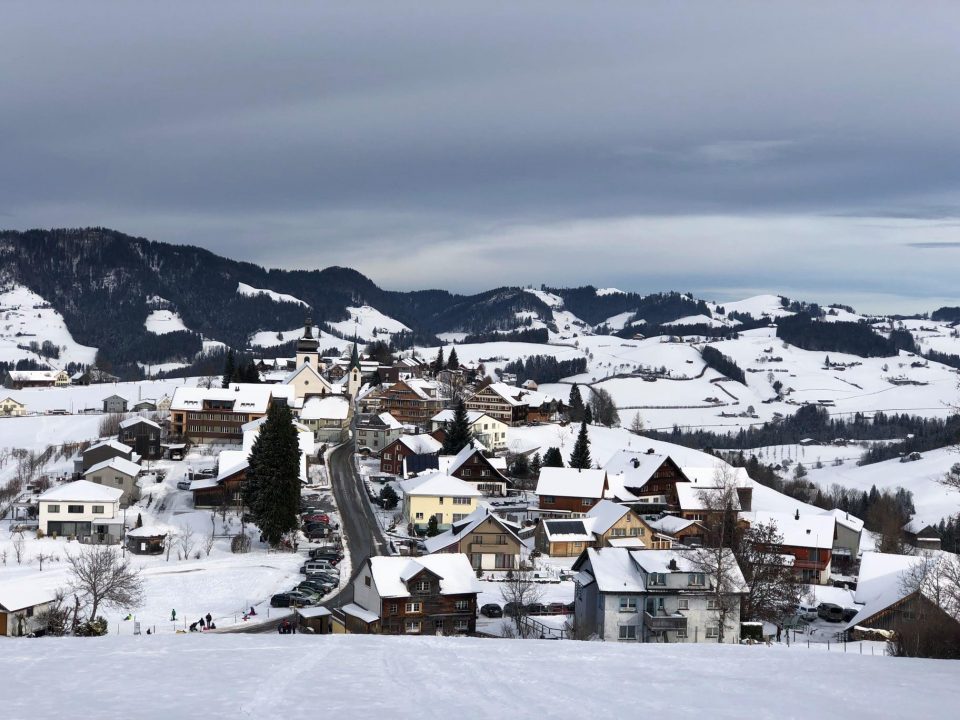 Down the ridge and back into Hemberg. The parking is clearly visible on the left.

Hemberg is accessible by public transport from Zurich with a train to Wattwil and then a PostBus up the hill but the bus is not that regular and it is certainly easier and faster by car. There is parking at the start of the trail however as this is the starting point for cross country skiing and a winter hiking route it is easy to see that the parking fills up fast on good days. There is a public toilet in Hemberg on the right, just after the central crossroads on the way to the parking. 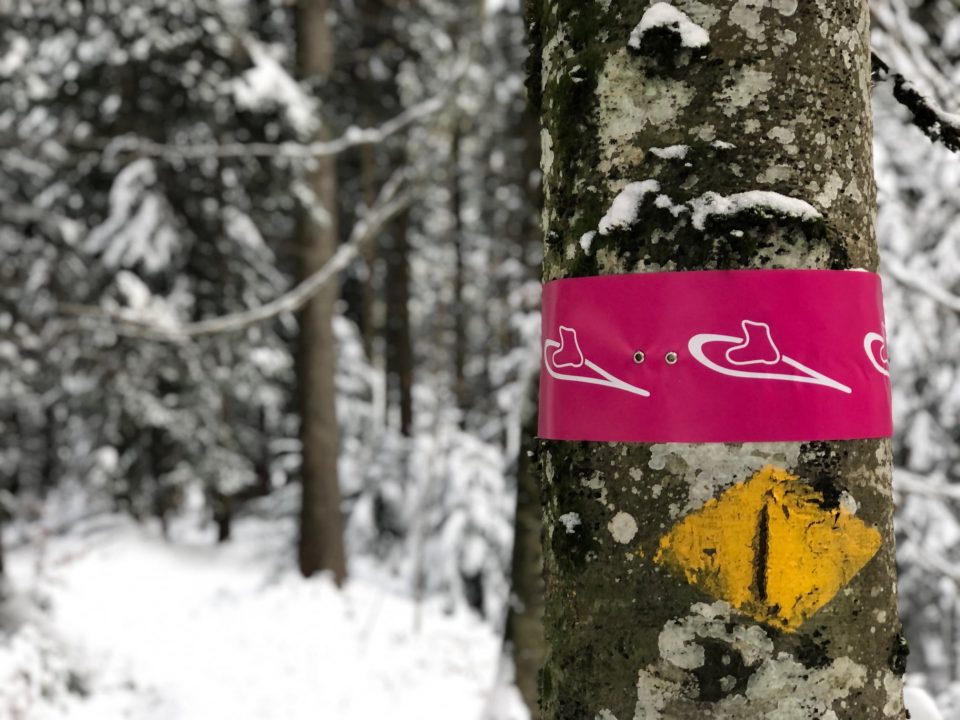 This route is well signposted but it is still sensible to have the Schweizermobility App. 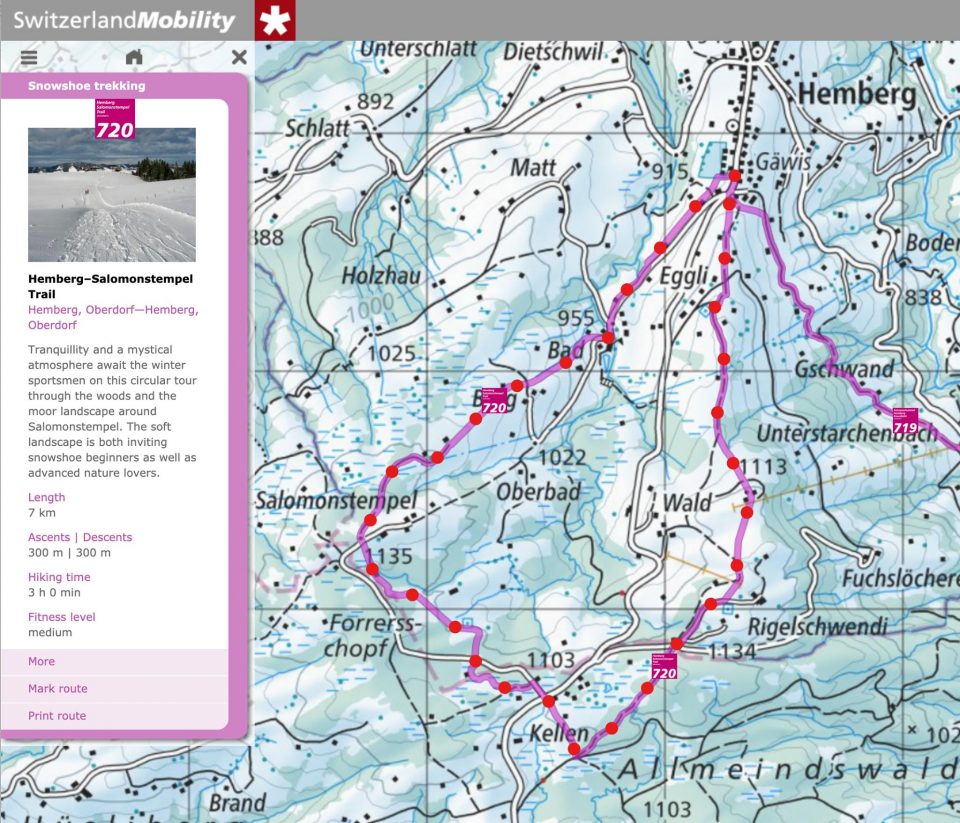 Route number 720 on Switzerlandmobility. Hemberg is also the starting point for another snowshoeing route to Ennetbühl.

More details on this Snow Shoe hike at www.schweizmobil.ch/en/snowshoe-trekking/trails-e/route-0720.html

Rhoda worked as a journalist in Luxembourg and the UK before moving into the not for profit sector. She now lives in Switzerland where leads hiking and snowshoeing groups.

A Scenic Winter Hike To Etzel Kulm in Schwyz

A Short and Scenic Hike Along The Rhine Falls