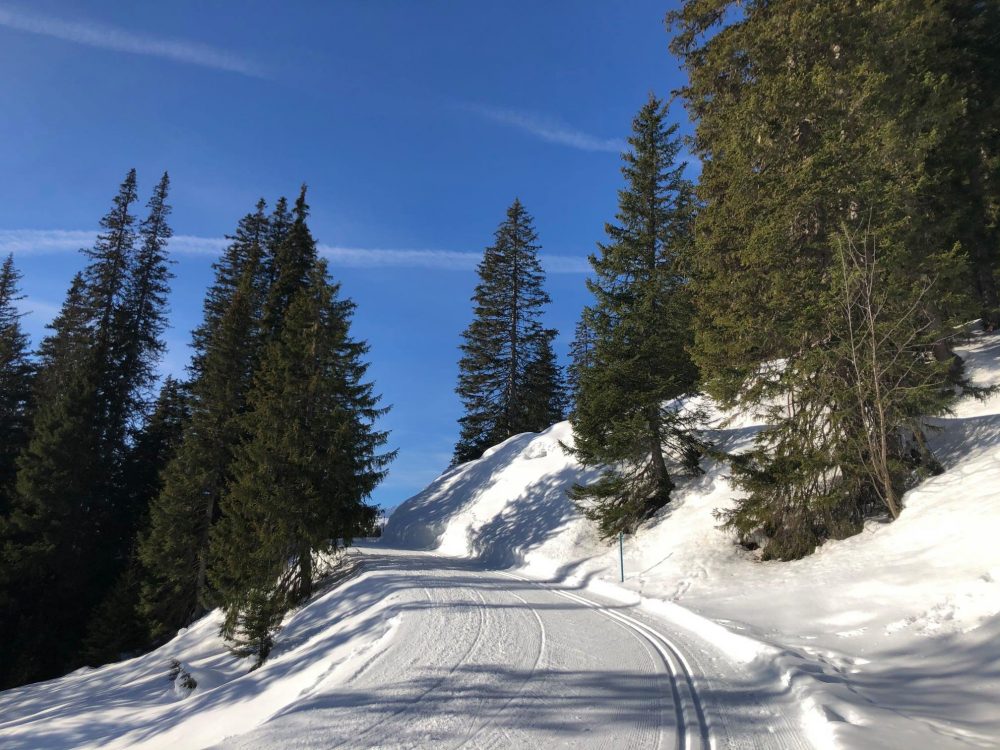 This winter hiking route, leading on to a snowshoeing option, is a great alternative for those who do not want to ski at Flumserberg. It is an easy walk which can be extended in both length and ultimately height, to give the level of difficulty that suits you. The whole way there are amazing views – up to the Spitzmeilen peak on the way out and over the Churfirsten range on your return. There are two ski restaurants en route and the final destination can be the beautiful Spitzmeilenhütte. Yet despite these facilities, you spend most of the time away from the downhill ski slopes and their crowds. 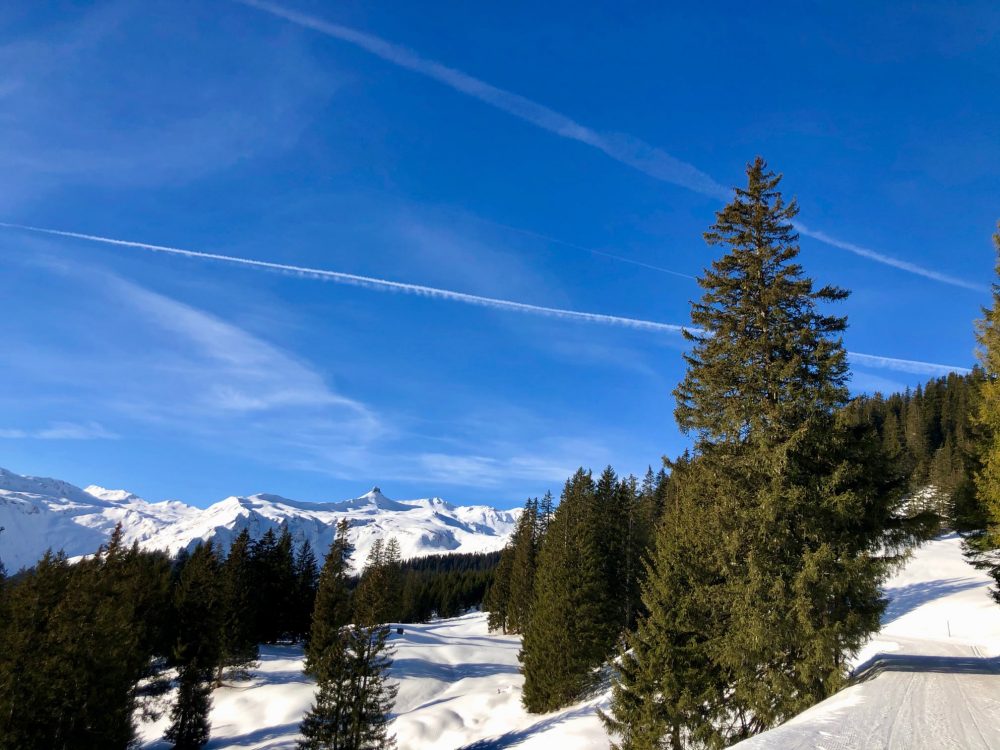 The best parking for this route is the carpark at the base of the Prodalp cable car. This can fill up quickly on sunny weekends, so it is worth starting early. Alternatively, there is a bus linking the top car park to the base of the Prodalp cable car. You could walk from here, but alternatively save time and energy for better things later in the route and catch the cable car up to Prodalp. (CHF16 return – Halb Tax is valid bringing a return down to CHF8.)

From the top of Prodalp cable car you need to carefully cross the ski slope to pick up the well signed winter hiking path. The winter hiking path shares the route with the cross country ski route. Hikers are asked to walk on the left giving the cross country skiers plenty of space and naturally to keep out of the skating tracks. After a few minutes you cross one final downhill ski slope and enter the trees. 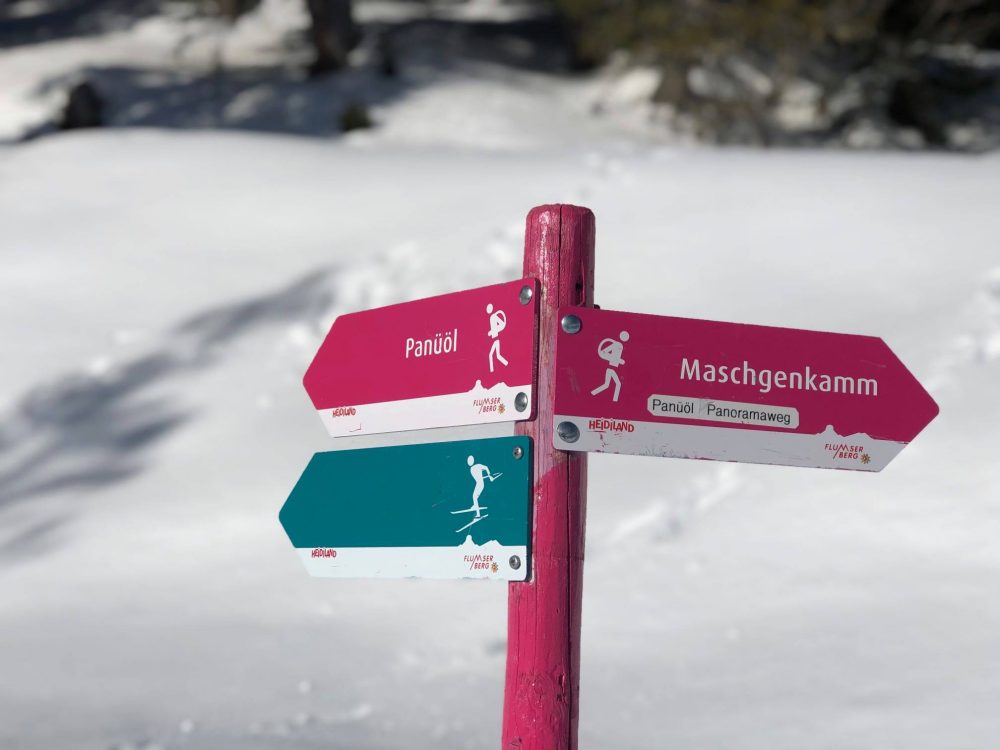 The winter hiking route is marked with pink poles and signposted to Panüöl, 4km away where there is a ski restaurant and this is the first obvious turning point. On your way to Panüöl you have the option to turn right, leaving the cross country route and head up hill slightly to take the panoramic route to Panüöl. 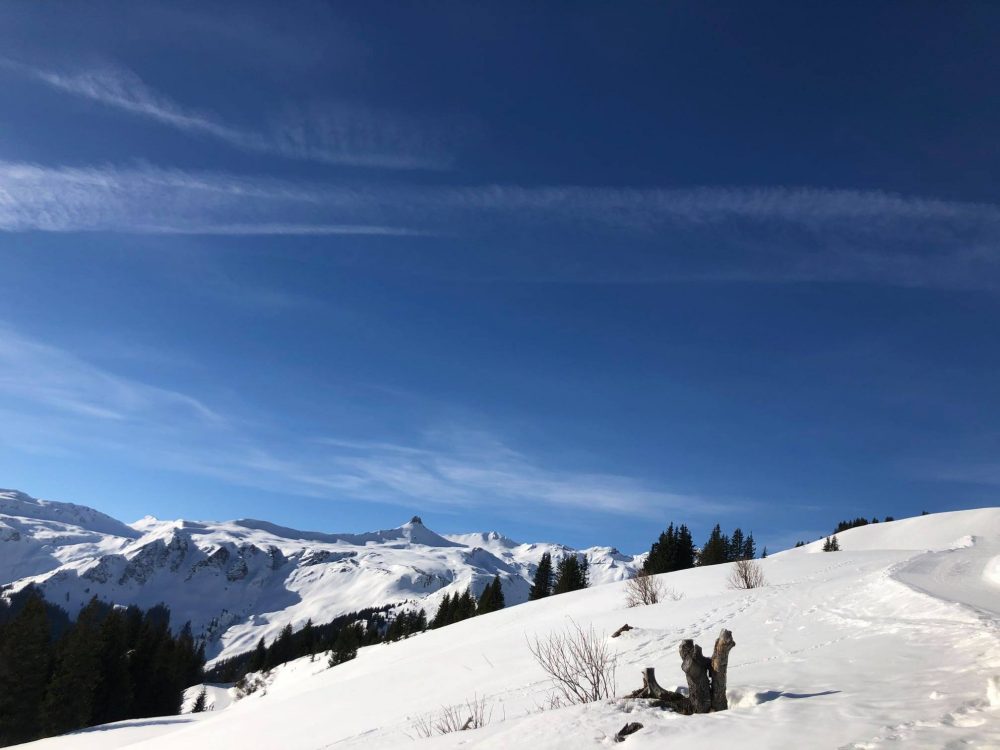 The Panoramaweg takes you initially up quite a steep hill but you are rewarded with wider views and you are likely to leave the ski tourers as well as the cross country skiers behind for a while. 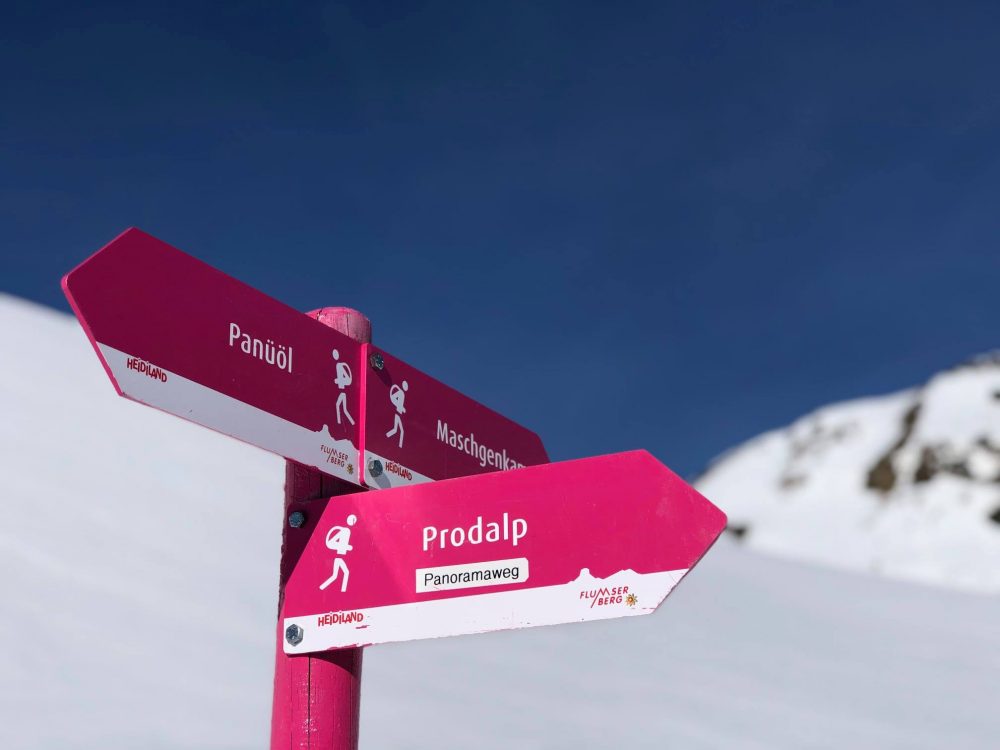 If you take this route you re-join the main path just before Panüöl by turning left and heading downhill once more just before the base of the chairlift and the restaurant. Turning back here would give you an 8km walk taking approximately 2.5 hours. If you follow the main route back to the starting point it is gently downhill virtually all the way. 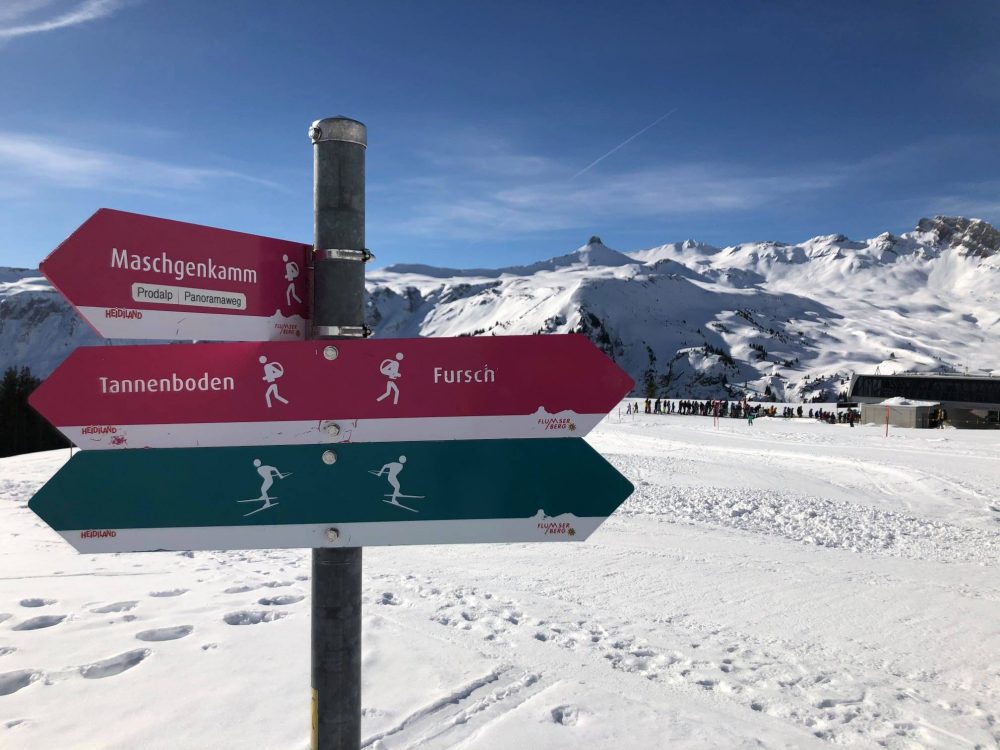 At the restaurant at Panüöl there you could turn around to make it a shorter walk. Alternatively, you can continue on the winter hiking path, skirting the bottom of a couple of ski runs to Fursch. Here, there is another café with benches outside and the end of the official winter hiking path and cross country ski route. The return walk to Fursch is 12km and 300m ascent and should take approximately 3.5 hours. 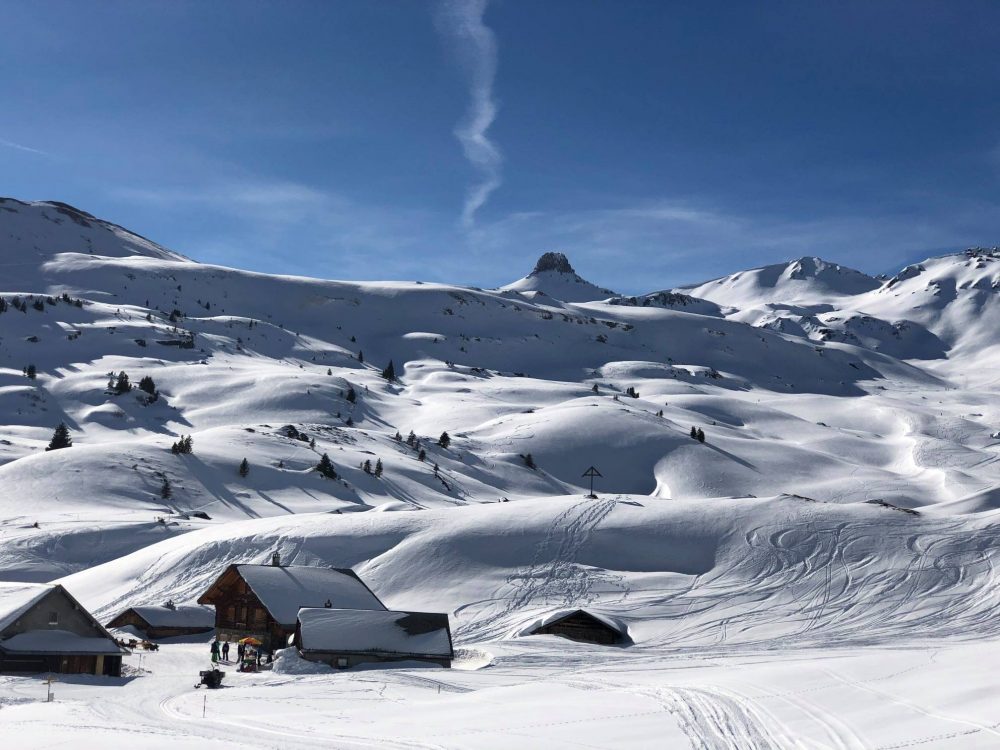 At Fursch there is a small ski restaurant and the signed route finishes. The snowshoeing route climbs the hill behind on its was to the Spitzenmeilenhütte 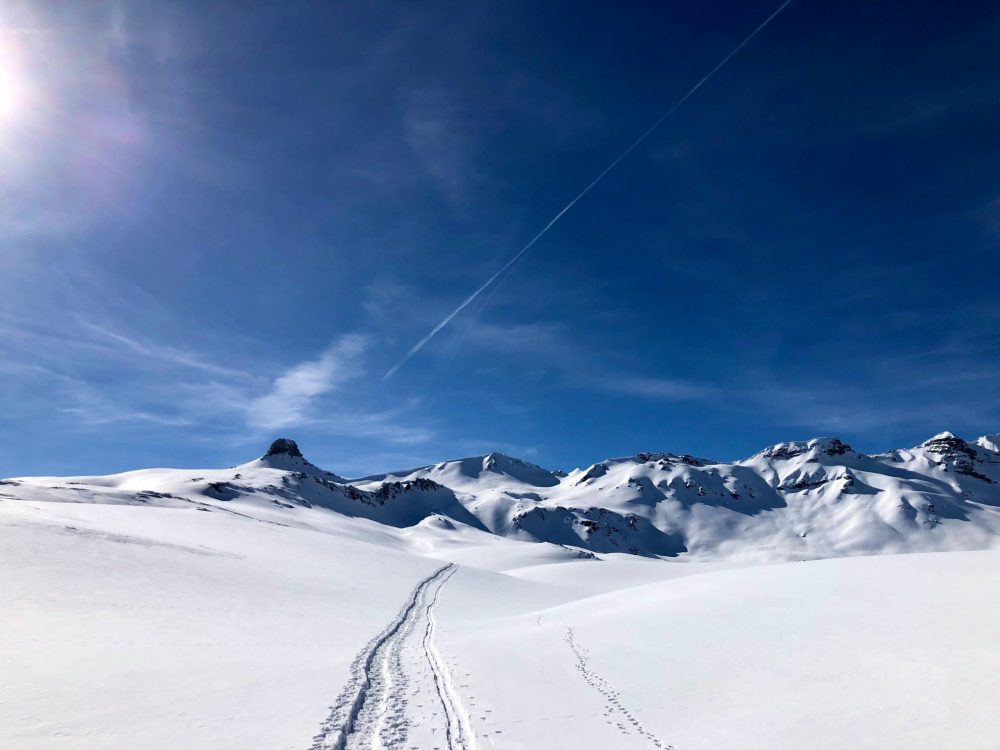 From Fursch to the Spitzmeilenhütte the route is steeper and not officially marked. When I was there there were clear snowshoeing and ski touring tracks, as well as a groomed winter hiking path up to the hut. I followed the snowshoeing tracks which took a steeper, shorter route than the groomed winter trail which I suspect is only maintained while the Spitzmeilenhütte is open. You are now getting close to the dramatic Spitzmeilen peak and the views all around are stunning. 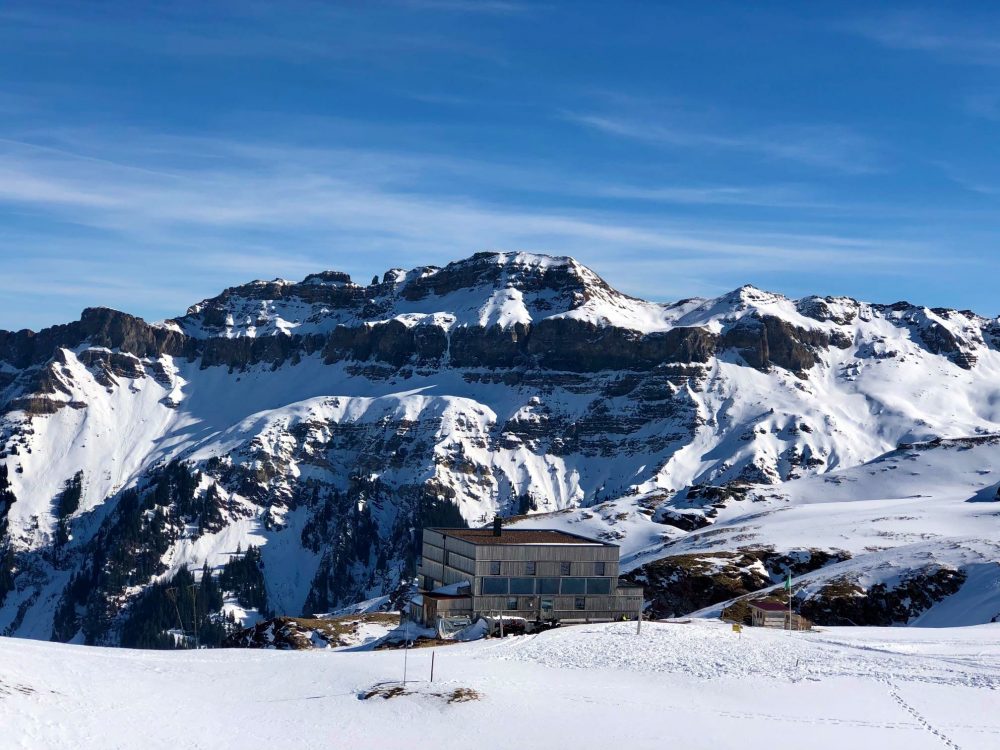 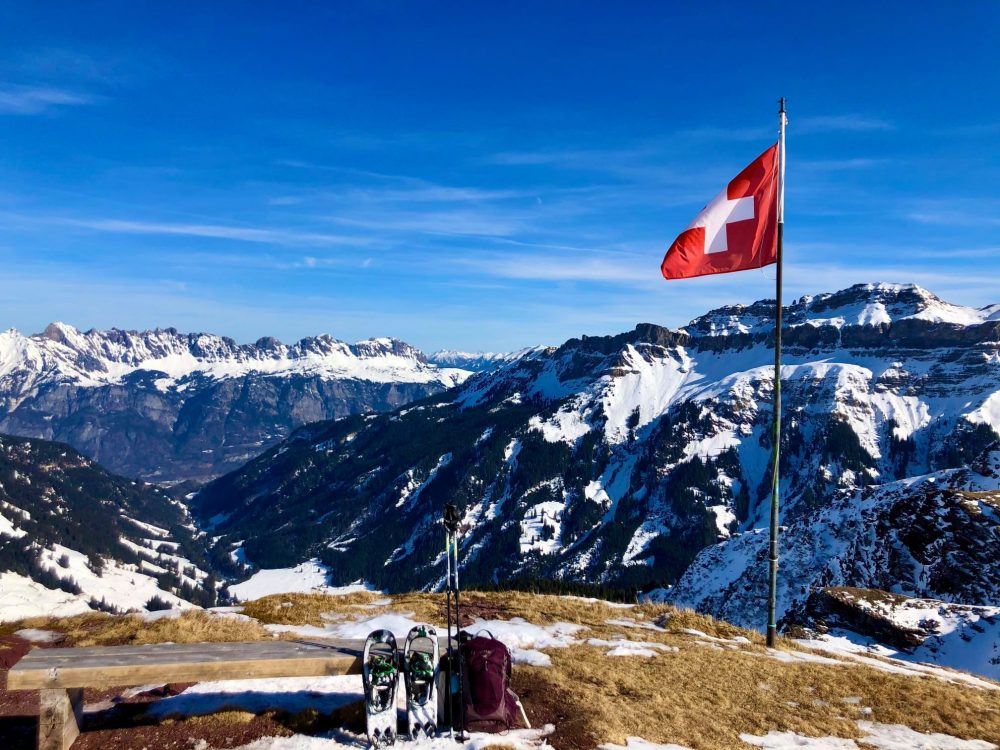 Return is the same way, although this time I opted for the main route rather than the Panüöl panoramic route as I was pressed for time to get back to meet those in my family who had spent the day skiing rather than hiking. 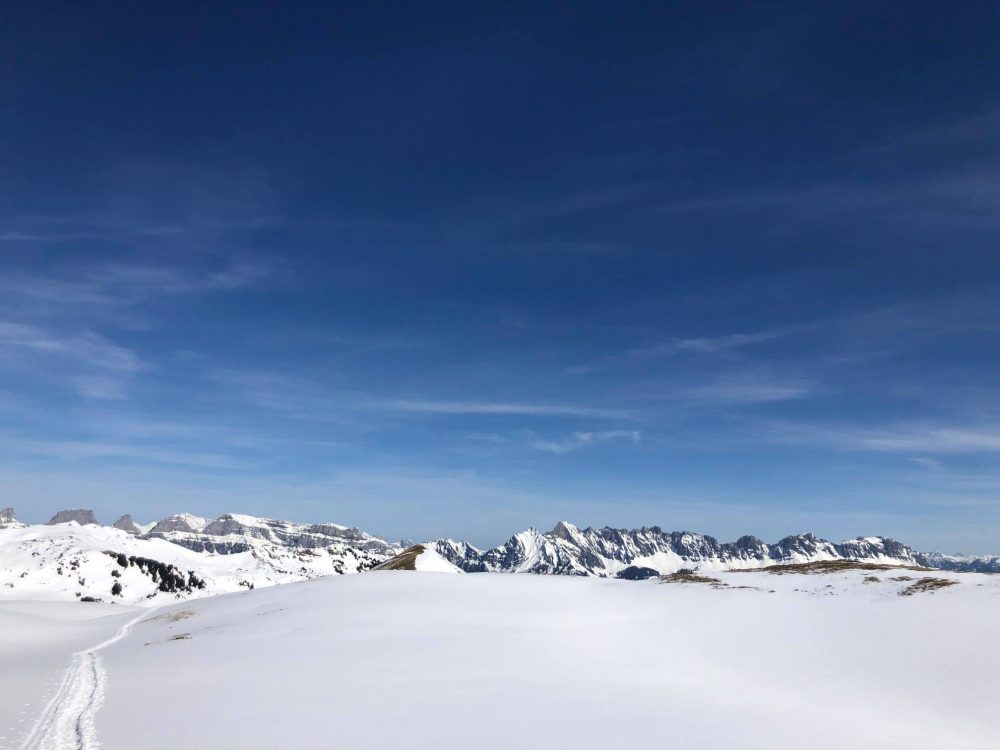 Heading back with the Churfirsten range as the new view

I made it with three minutes to spare and can recommend a refreshing drink at the café by the cable car in the last of the day’s sunshine before heading down on the cable car and home. 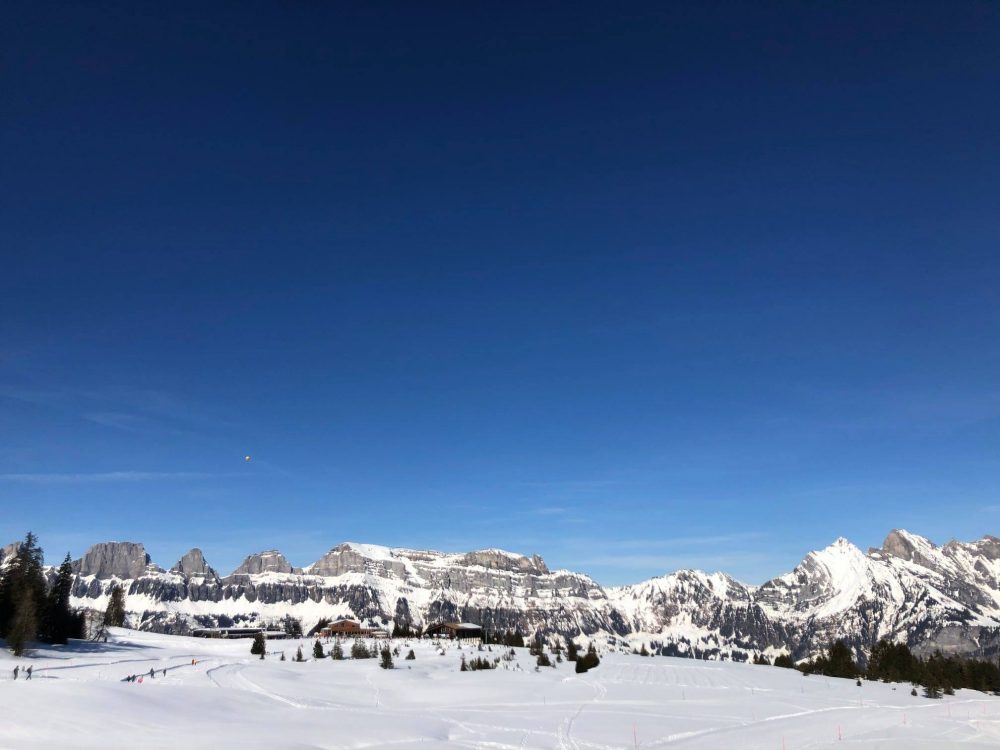 Approaching Prodalp cable car at the end of the hike

Snowhoe and Hiking Trail in Flumserberg

Level: Easy to difficult depending on length and speed.

Parking: Base of Prodalp cable car

Other Snowshoe Hikes you may be interested in going on include:

The Alp Sellamatt Snowshoe Trail – Not Far From Zurich

What’s On In Zurich Mid February 2021

What’s On In Zurich Beginning of February 2021

The trees in front of the Grossmünster are still

Zurich is full of the joys of Spring with plenty o

Towers in Zurich. The Freitag Tower and Prime Towe

What a difference a few days makes! February has b

A throwback to a snowy view from the Storchen towa

Another day, another Zurich fountain. This time th

Today I just wanted to share this beautiful pictur

Pink sunsets on the lake - a throwback to one wher

One of my favourite hikes right now? It has to be