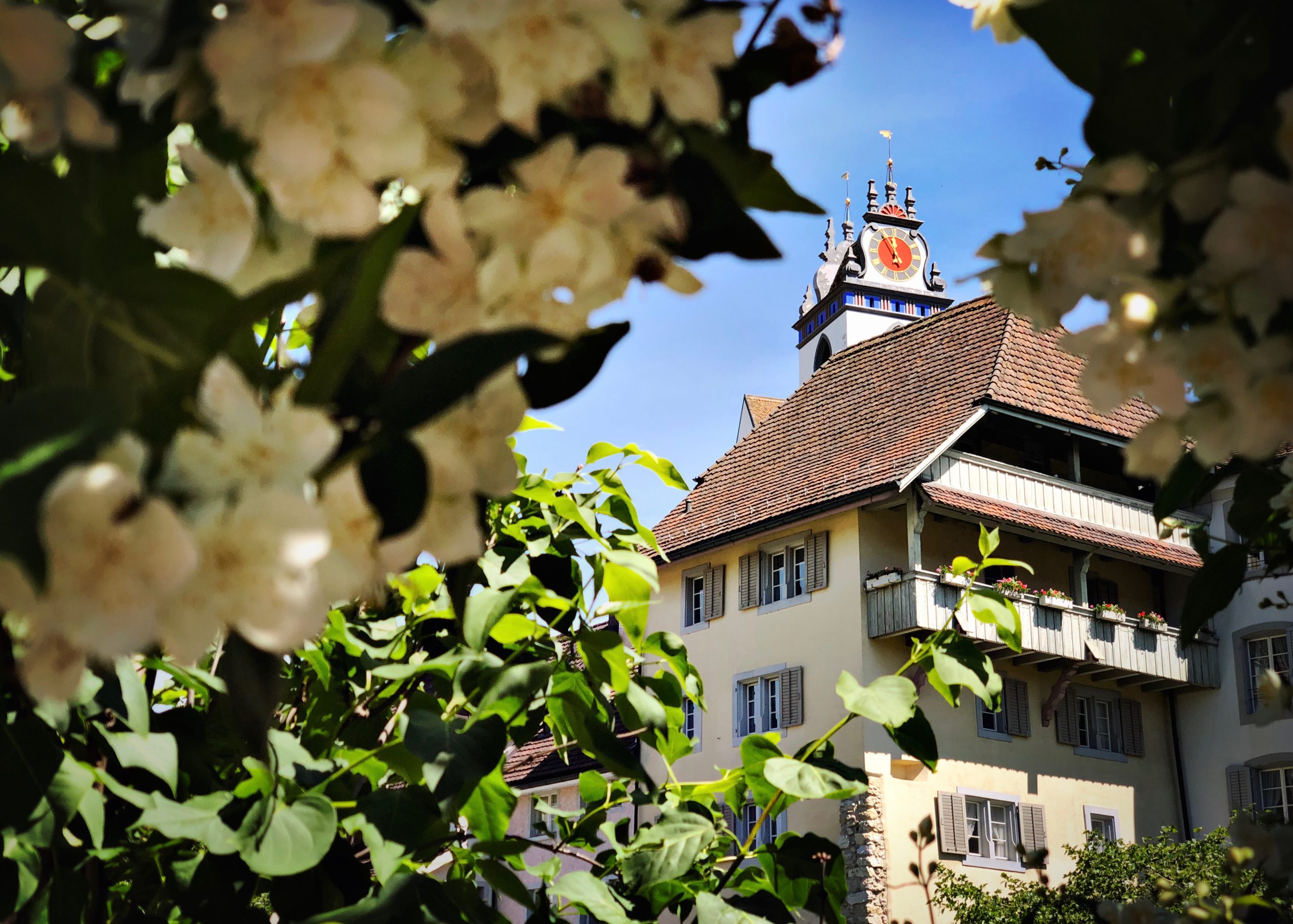 The Canton of Aargau – An Overlooked Gem in Central Switzerland

For most travellers Canton Aargau probably rings a bell as an occasional pit stop on the A1 motorway when travelling between some better-known regions of Switzerland. If you have been living in Switzerland for some time, you can’t help but notice the somewhat tarnished reputation that surrounds the fourth most populous canton as even most of the Swiss themselves tend to think about Aargau as an industrial hinterland rather than an attractive travel destination. Even worse, the people from the canton are often poked fun at for showcasing their fast cars and glitzy fashion in Zurich during the weekends. However, there is a lot more to Aargau than first meet the eye … 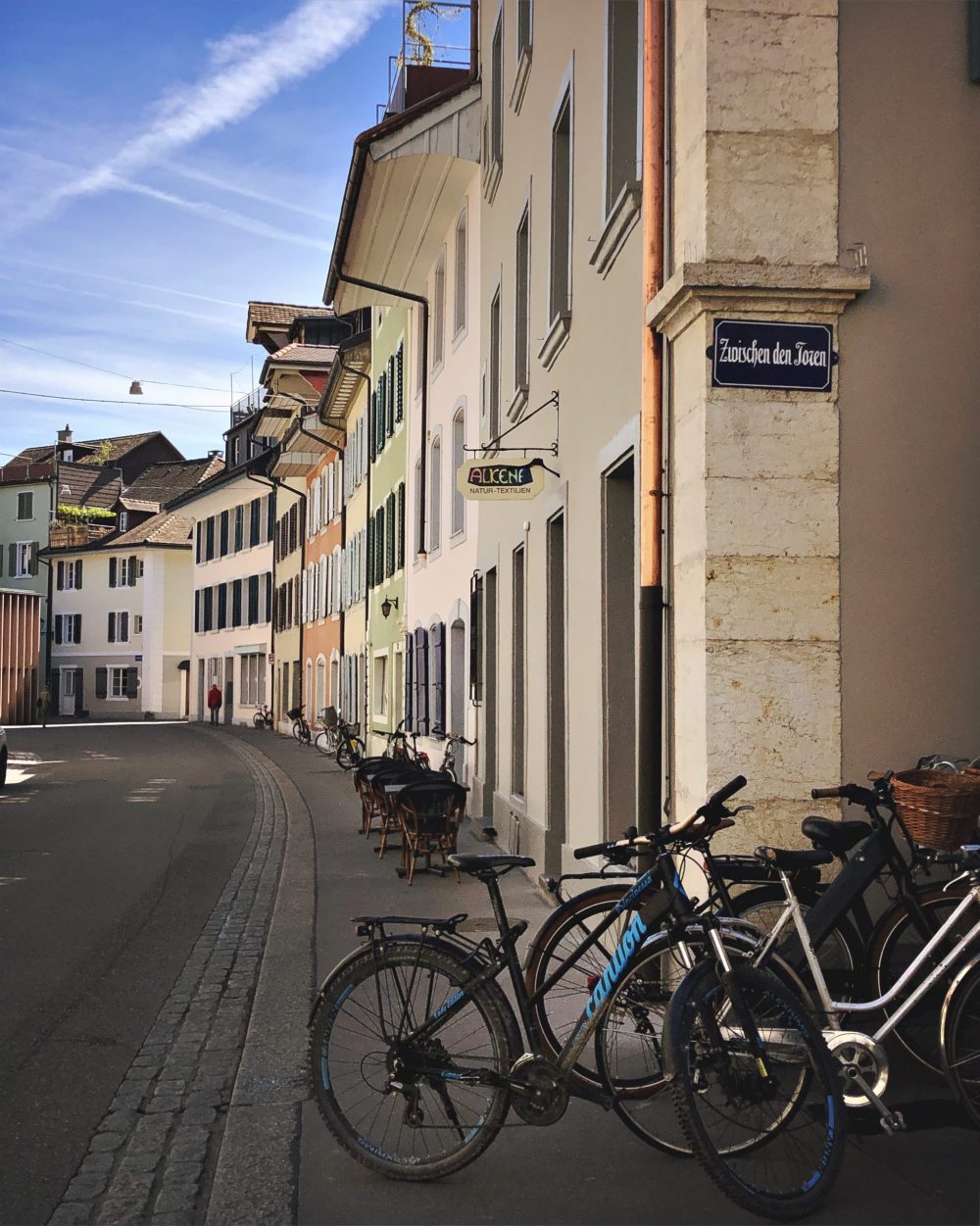 Behind the unjust mockery lies a surprisingly welcoming region that’s ready to smash the stereotypes and sweep the open-minded visitors off their feet. Diverse Aargau is in fact home to some of Switzerland’s most picturesque castles and well-renowned thermal baths. 1,650 kilometres of hiking trails and 1,000 kilometres of cycling paths crisscrossing the lush, rolling hills of Aargau are begging to be discovered on foot, bicycle or even on skis. Shun the queues of the airport and forget about the nerve wrecking traffic jams at the Gotthard tunnel – the best thing about this often-overlooked canton is its perfect location: even its remotest corner of Aargau can be easily reached from Zurich in less than an hour. 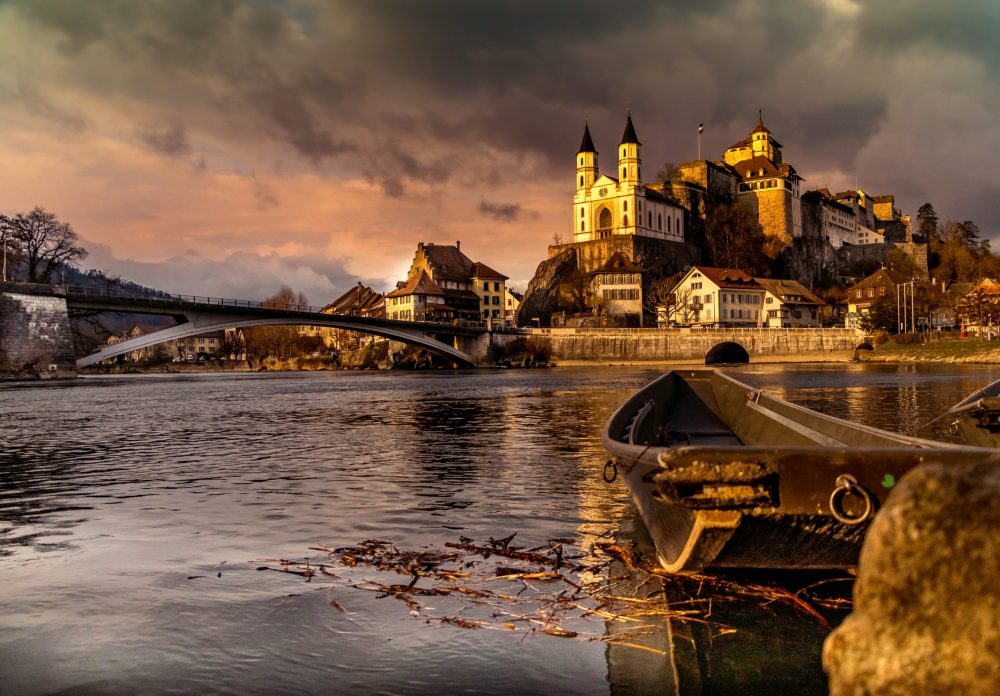 If you are looking for a day trip to unwind and soak up the slow living of small-town Switzerland, look no further. With its idyllic setting on the River Aare at the southern foothills of the Jura mountains, Aarau makes for a perfect day trip or even for a weekend getaway from Zurich in any season.

Here is our list of Top 10 things to see and do when visiting Aarau: 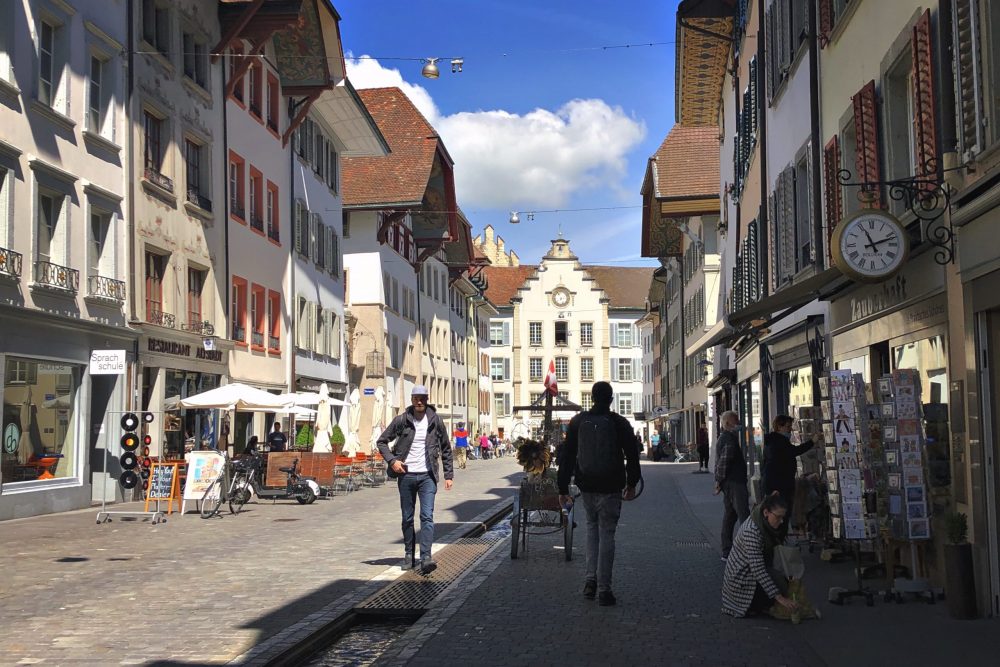 Aarau’s historical centre, one of the loveliest in Central Switzerland, offers a leisurely journey back to the Middle Ages. Strolling through the cobbled streets and alleys, it’s hard not to fall in love with Aarau’s picturesque pastel-coloured houses. Highlights of the old town include the Catholic-turned-Reformist city church with its glazing white walls and contrasting red clock, the medieval Gate Tower that once served as the main entrance to the town and the elegant façade of the City Hall. Aarau’s pedestrianised center is a joy to discover on foot as the main sights are all located just a leisurely walk from the central train and bus station. If you are interested in immersing yourself in the fascinating history of Aarau, the local tourist board aarau info offers a range of guided tours in several languages throughout the year. 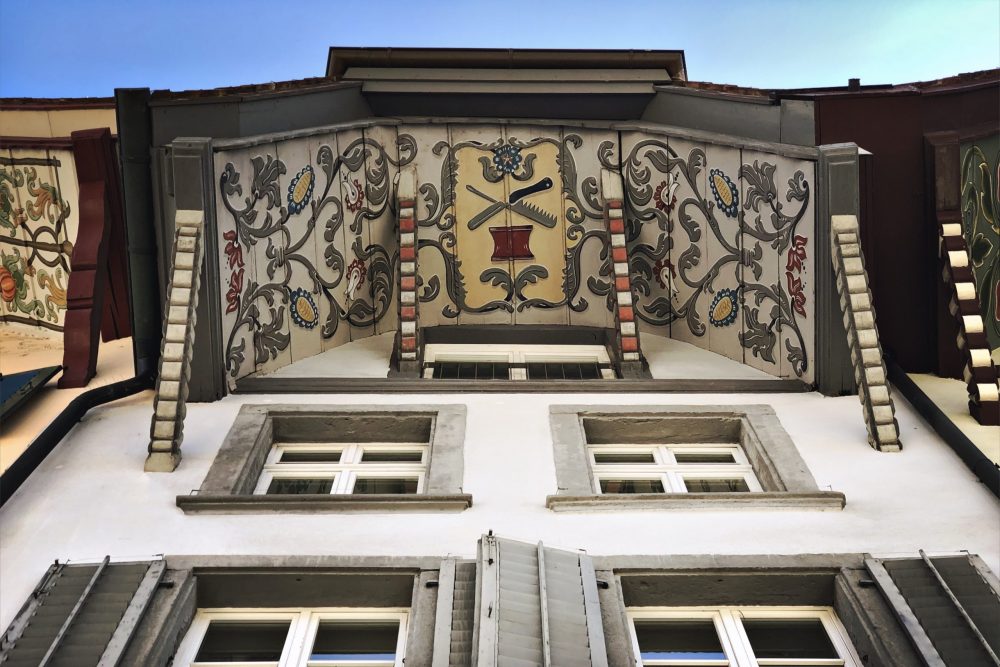 Keeping your heads in the clouds is not a fanciful eccentricity in Aarau – it’s a must! The houses of the old town boast more than 87 beautifully painted gables, so called ‘Dachhimmel’. The tradition of embellishing the wooden eaves of the houses with colourful and intricate paintings started in the 16th century and still lives on to this day with the recently renovated buildings showcasing creative, modern interpretations of the century old designs.

Surprising as it may sound, Aarau is fast becoming an attractive shopping destination thanks to the town’s forward-looking strategy of banning most big-brand chain stores from its historic centre and allowing independent, locally owned shops to thrive. The impossibly cute shops offer everything from designer clothes and jewellery to organic spices and artisanal chocolates. 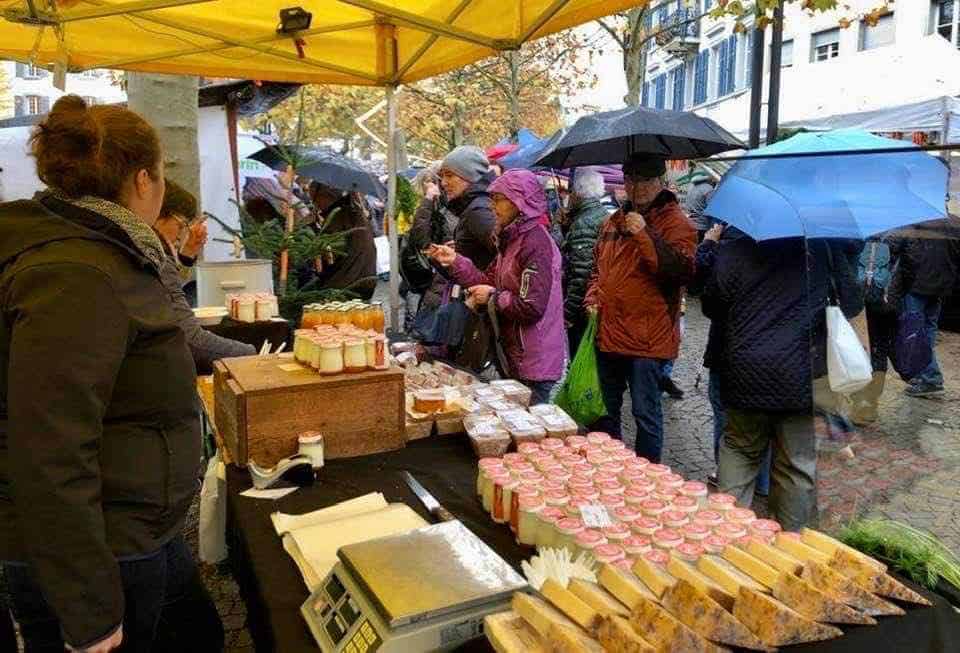 Every first Wednesday of November, Aarau celebrates the Canton’s most iconic produce with the great spectacle of the Carrot Festival. Replenishing your beta carotene level has never been this much fun! At Aarau’s Rüeblimärt, carrots come in all shapes and sizes. Vividly decorated stalls sell delicious cakes, breads, delicacies and many other products, all made of the region’s favorite root vegetable. Check out our earlier article about the Carrot Festival here. 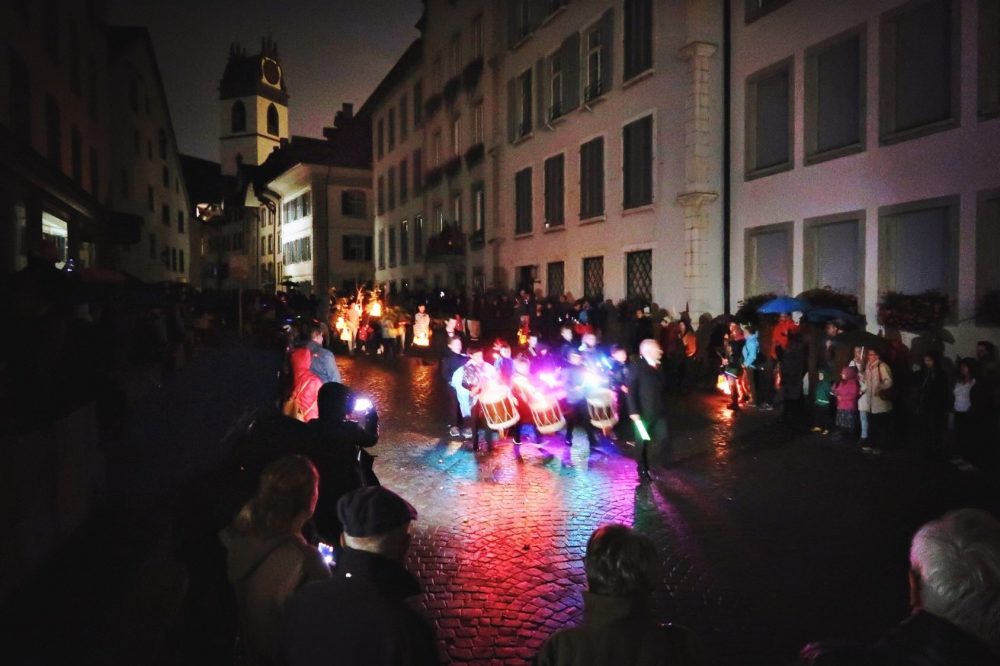 The origins of Aarau’s extremely instagramable lantern parade, the Bachfischet, goes back to medieval times when the town’s water stream had to be cleaned after the summer season. While the adults were busy draining the stream and cleaning the empty waterbeds, the children had the jollier task of fishing and catching crabs in the remaining puddles illuminating their ways with self-made lanterns.

Nowadays the chores of cleaning the sewers are thankfully left to the professionals while the young and the not-so-young parade across streets of the town in the evening dusk with 1,500 or so lanterns. Bachfischet usually takes place in September on the second last Friday before the autumn school break. Check aarau info’s website for the exact dates. 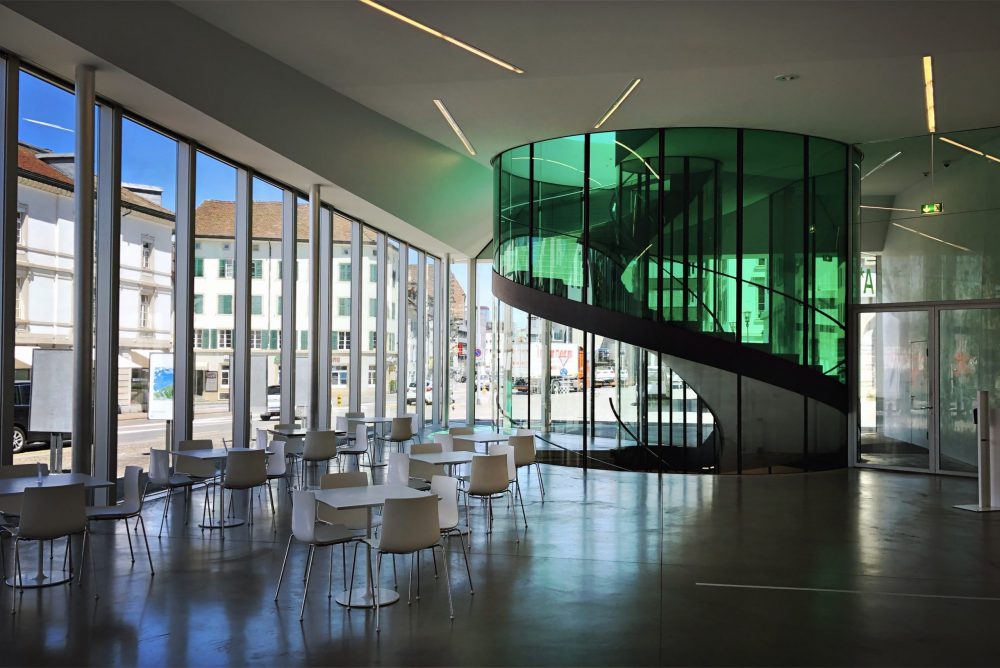 With its particular focus on home-grown talents the Aargauer Kunsthaus aspires to become the country’s top destination for Swiss art. Besides the small but diverse permanent collection the museum regularly showcases artworks by lesser-known, alternative Swiss artists. Flower fans and photo enthusiasts should not miss the Flower for Art exhibition where Swiss master florists exhibit their floral interpretations of key artworks from the museum’s collection every second week of March. For opening hours and ticket prices head to the museum’s website. 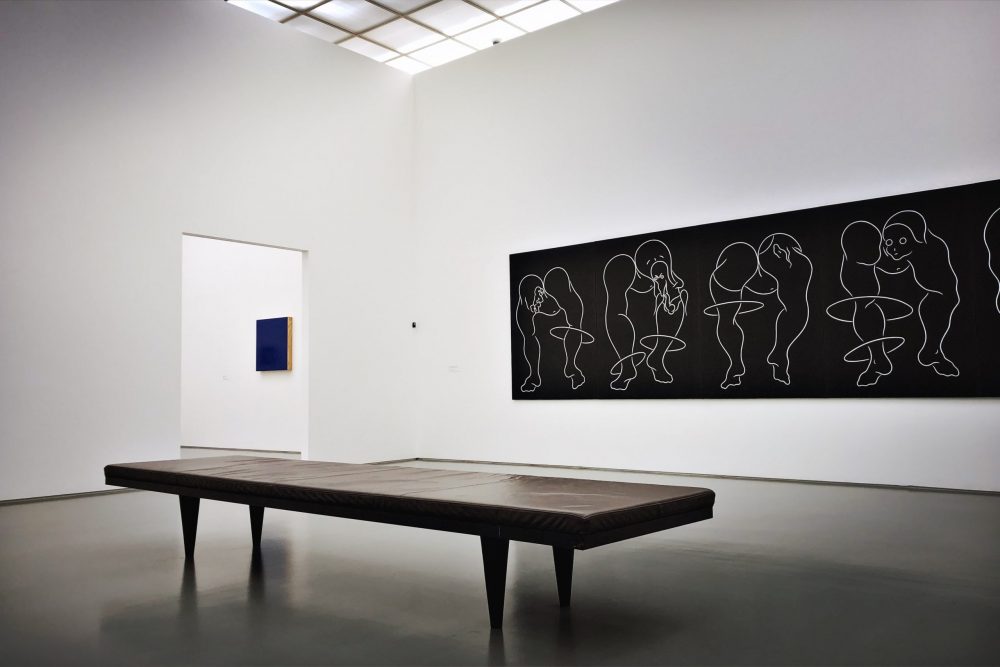 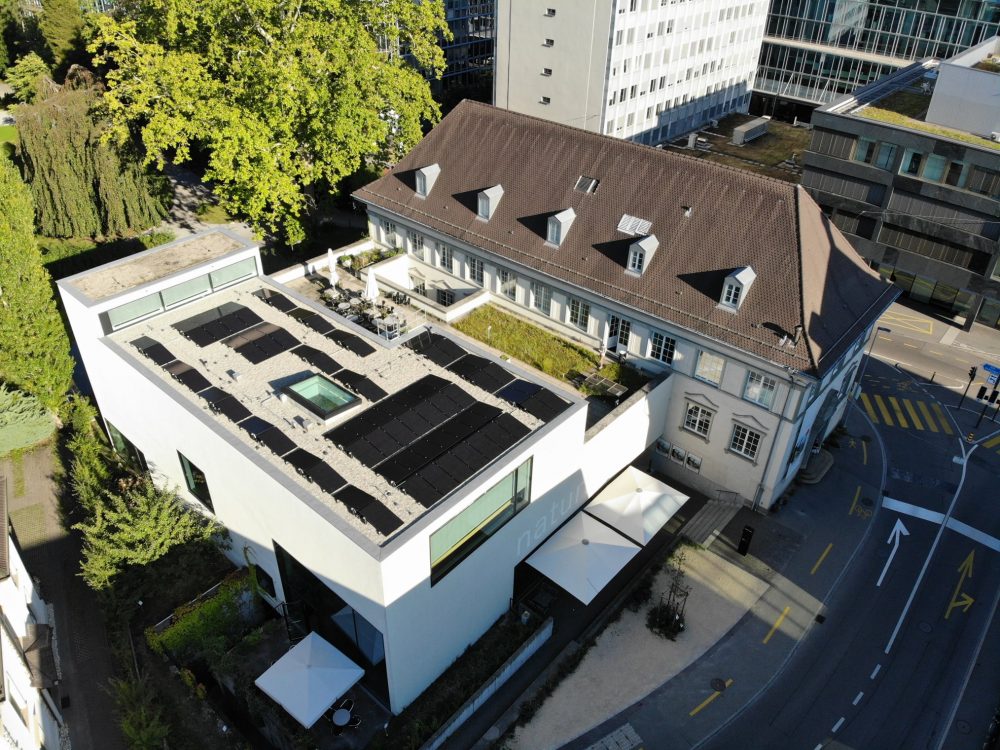 Aarau’s Naturama is a modern museum focusing on the natural history and ecology of the canton. To the delight of dinosaur aficionados, the museum exhibits some of the finest fossils found at the nearby archeological sites of Frick. Kids will especially love the life-sized mammoth installations as well as the virtual flight over the canton in the museum’s movie room. Head to the museum’s website for information about opening hours, ticket prices and special offers. Families can benefit from free entry for kids below the age of 5 and reduced ticket prices up to the age of 16. 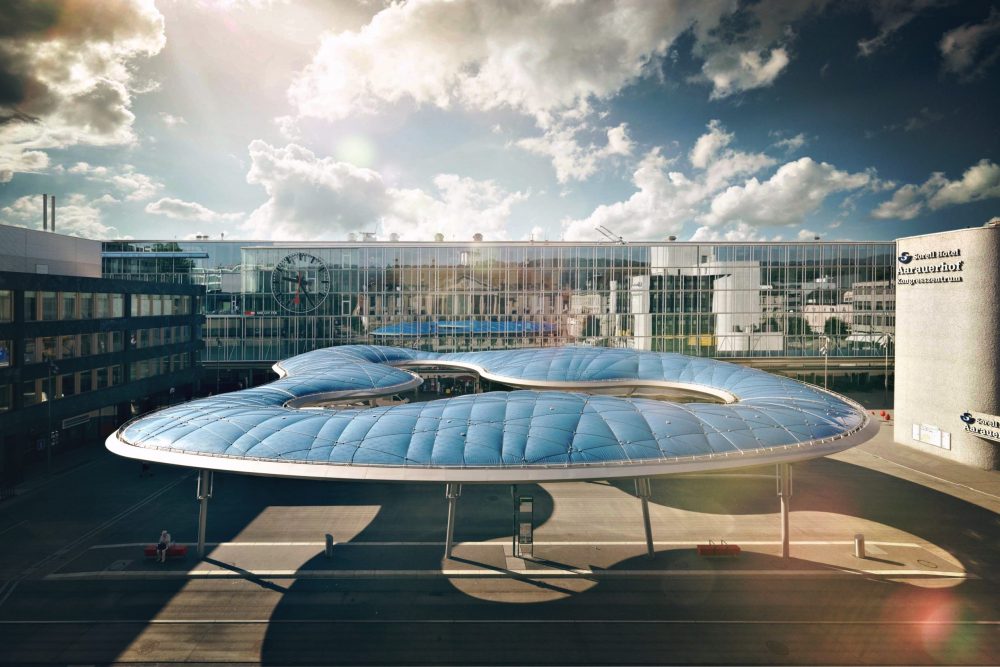 Travellers with an eye for modern architecture will stumble upon some rare gems in Aarau. The modernist airy expansion of the Aargauer Kunsthaus is the work of the Basel-based star architect studio Herzog & de Meuron. The impressive glass hall makes for a perfect stop for a mid-day coffee and some people watching.

The remarkable all-timber structure of the new Market Hall, inaugurated in 2003, hosts Aarau’s beloved flea market on every first Saturday of the month between March and November.

As part of the renovation of the town’s train station and its surroundings in 2014, Zurich-based studio of vehovar & jauslin dreamed up Aarau’s new favorite landmark, an amoeba-shaped canopy covering the bus station – better known as the ‘Wolke’ (Cloud). The semi-translucent structure is a stellar example of a new, cutting-edge construction technique using compressed air as its key building element. 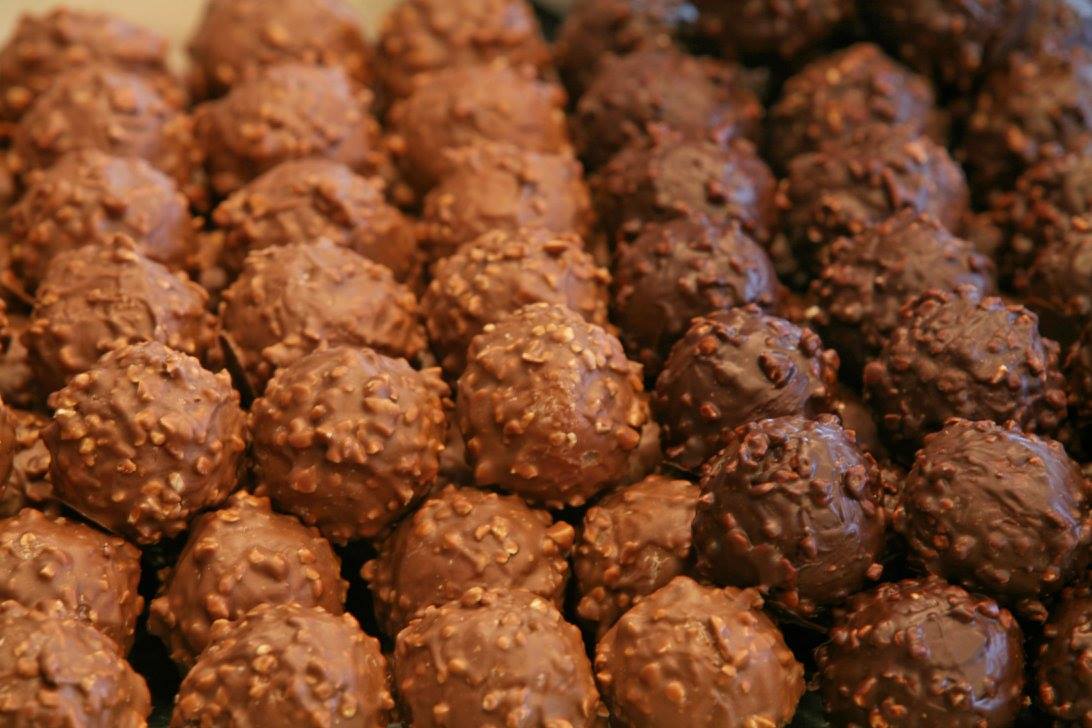 No trip to Aarau would be complete without indulging in the sweet delights of the Brändli Bombe. Created by the city’s leading confectionary Brändli, the Brändli Bombe is Aarau’s signature sweet – a smooth marzipan paste coated with velvety dark chocolate and sprinkled with almond flakes. The bomb didn’t just conquer the hearts and stomachs of the locals. If British royal rumors are to be believed, the Brändli Bombe was a staple at Queen Elizabeth’s, the Queen Mother’s, afternoon teas.

The graceful neoclassical building of the Haus zum Schlossgarten has a special place in the heart of Aarau’s citizens. During the French occupation of 1798 it served as the seat of the Swiss government making Aarau the first capital of the unified Switzerland. However, the city’s political fame didn’t last long – only 6 months later the capital was moved to Lucerne. Check the opening hours and the list of upcoming programmes at the Haus zum Schlossgarten here. 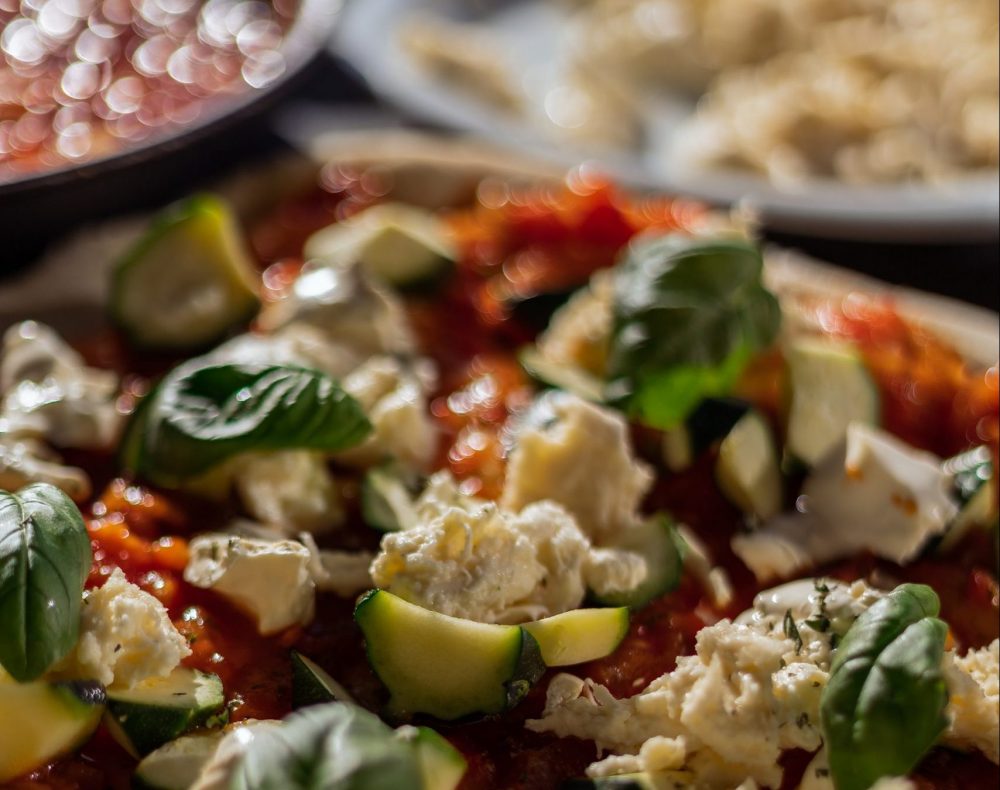 With its attractive location a stone’s-throw away from the banks of the River Aare – or as the locals like to call it the Aarauer Riviera – Restaurant Mürset is pretty much an Aarau institution. In fact, Mürset’s historic building is home to three different gastronomy concepts: a bohemian brasserie with French flair, a more traditional restaurant serving up perfectly executed Swiss classics and a wine bar.

One can hardly imagine a better reward after a busy day spent with sightseeing than sipping on a bubbly on the elegant terrace of Hotel Kettenbrücke overlooking the river. The sophisticated, internationally-minded menu earned not less than 13 Gault Millau points for the restaurants already – and they’re counting. 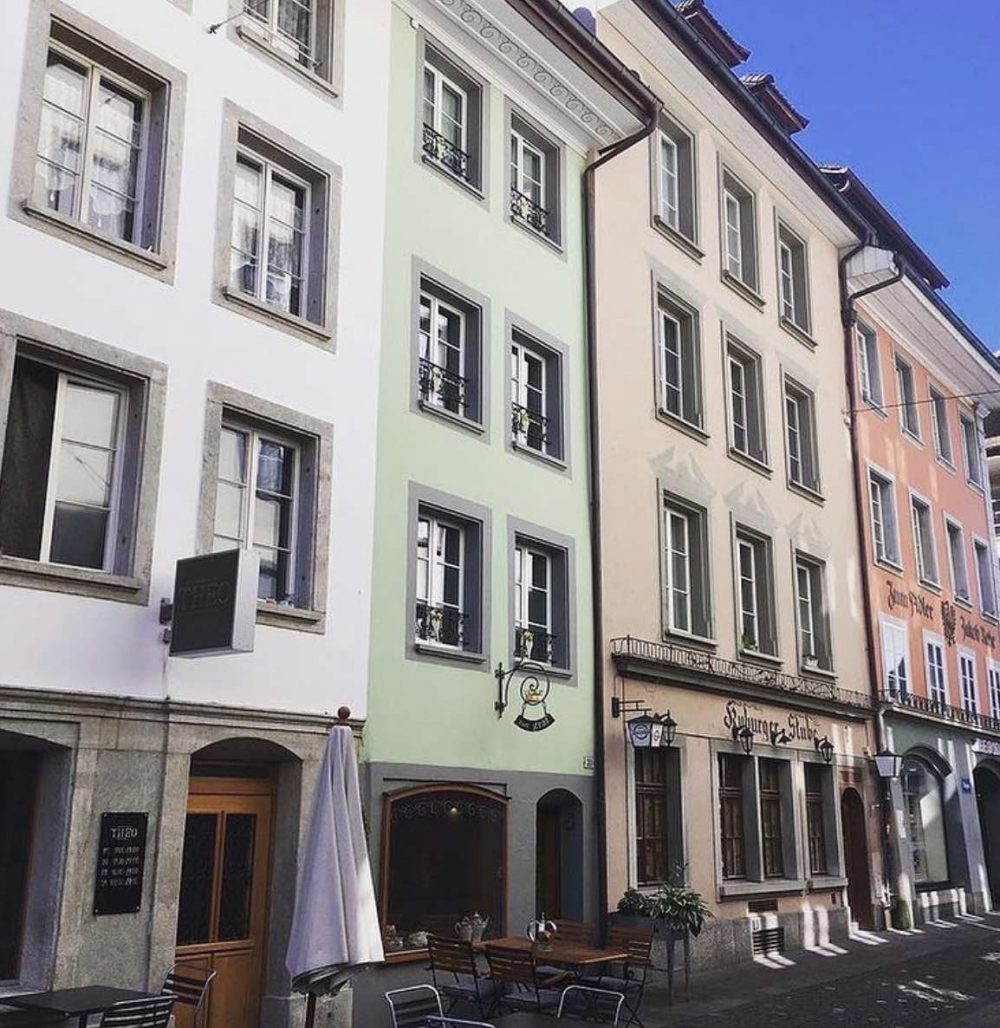 Spending a night at Zum Graf Bed & Breakfast is like going to bed with history. The charming 14th century building located right at the hearth of the historical old town served as a hair comb manufacture, a bookbinding shop, a butchery, and is now a fabulously renovated guest house. 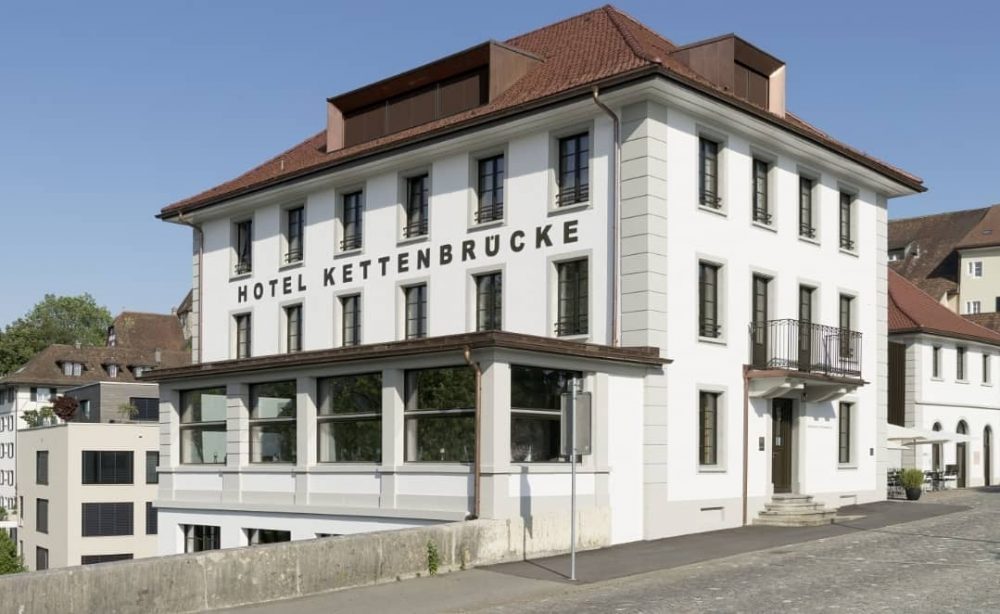 Those looking for the comfort and pampering of a 4-star hotel will love Hotel Kettenbrücke offering elegantly furnished rooms, impeccable gastronomy and a sunny terrace perfect for an afternoon apèro.

How to Get There

Aarau’s main parking lots are conveniently located at the periphery of the old town just a short walk from the main sights. Trains between Zurich’s Main Station and Aarau run every 15–20 minutes for CHF 12.90 with a half-fare card.

Travelers of two can benefit from aarau info’s attractive weekend package including accommodation for one night in a 3-star hotel, a CHF 20.00 voucher to be spent at local cafés and restaurants and free public transport to and from Aarau within the A-Welle tariff zone (Zurich included). Head to Arau info’s website for more information.

Other Places To Explore in Aarau

Interested in learning more about canton Aargau? Check out our earlier articles below for more travel inspiration in the region:

Top Things to See and Do in Baden

An IT Manager by profession, Peter loves the great outdoors and is an avid explorer of Switzerland and enjoys hiking and discovering new places in his free time.

Top Things To See and Do In Zug

12 Awesome Things to See and Do in Lausanne