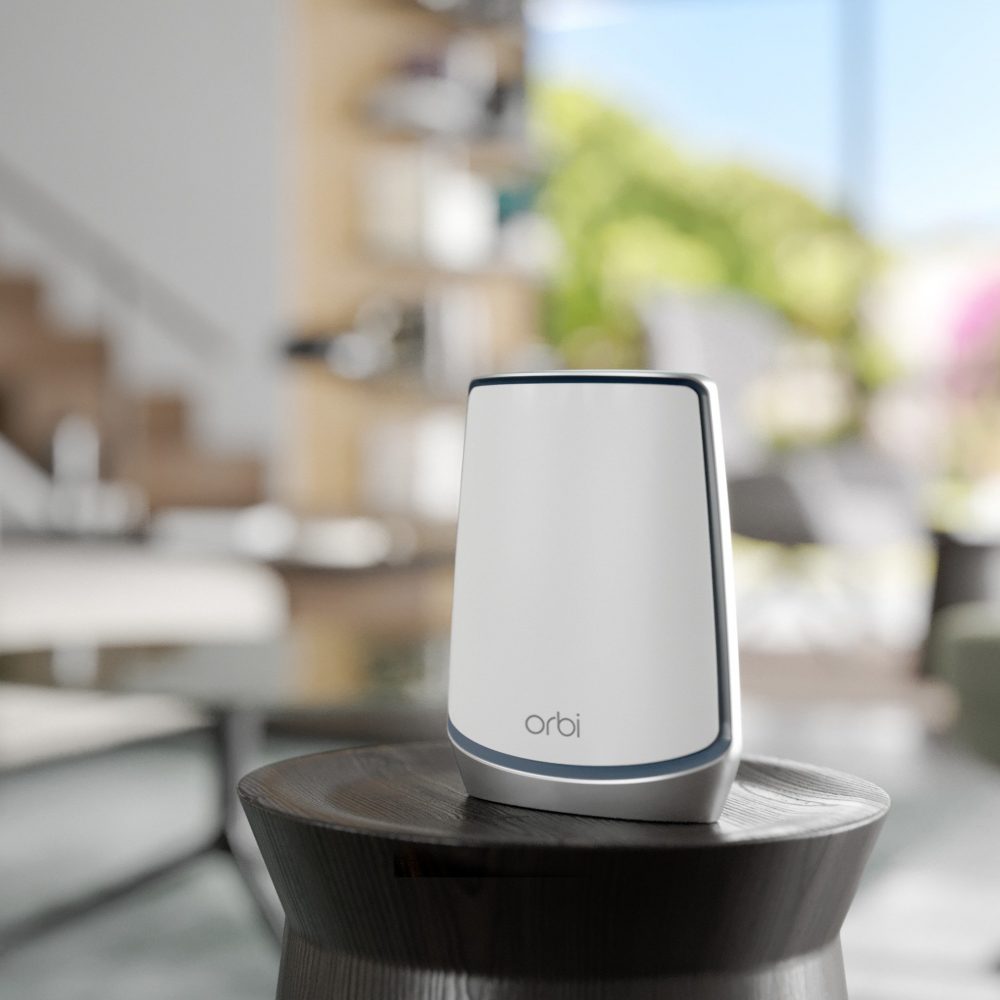 We are all increasingly reliant on technology these days to get even the simplest things done. We need it for the practical things in life as well for enjoying our free time, entertainment and leisure. We have pcs, printers, laptops, online banking, TVs, Streaming services, Netflix, Zoom calls, game consoles – not to mention our phones and tablets and all the household devices we control with technology. To get the best out of all our devices, it’s really important to have good, reliable wifi – and that also means having a good router!

Last year I was really struggling with my old router, especially when we had a house full of people all using multiple devices. Trying to upload pictures to the blog when you have to wait a few minutes for each one to load (don’t even talk about video!) was making things a real nightmare. We had tried tweaking the network and changing the settings on our existing router and various other things, but to no avail. So when I got the opportunity to test out the NETGEAR Orbi WiFi 6 Mesh Router I simply couldn’t wait for it to arrive!

According to CNET.com The Orbi 6 Is The Fastest Money Can Buy!

I had already done some research on the internet and read that according to the tech website cnet.com, the Orbi 6 is a fastest mesh router that money can buy! It all sounded very promising – but would it live up to the hype? 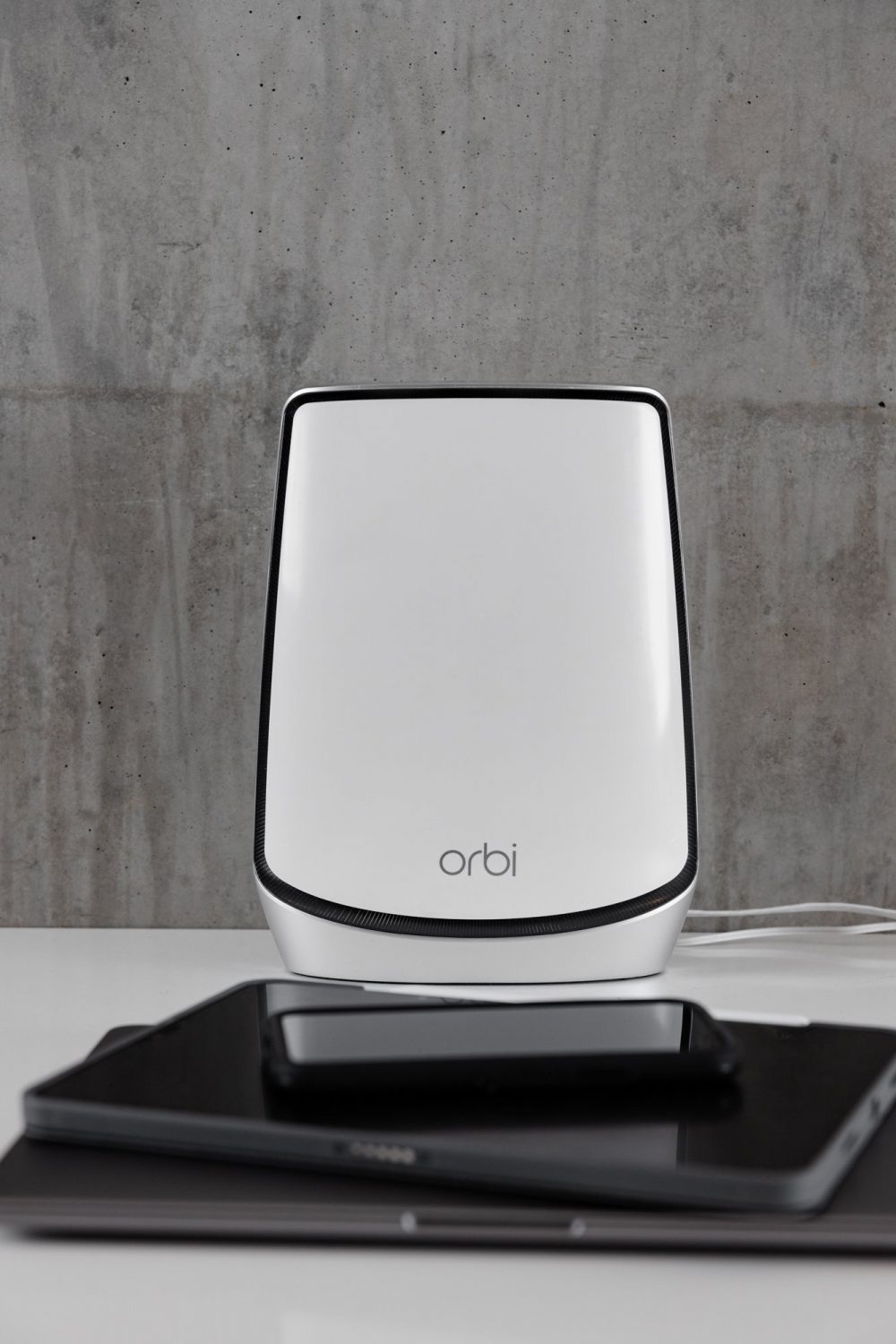 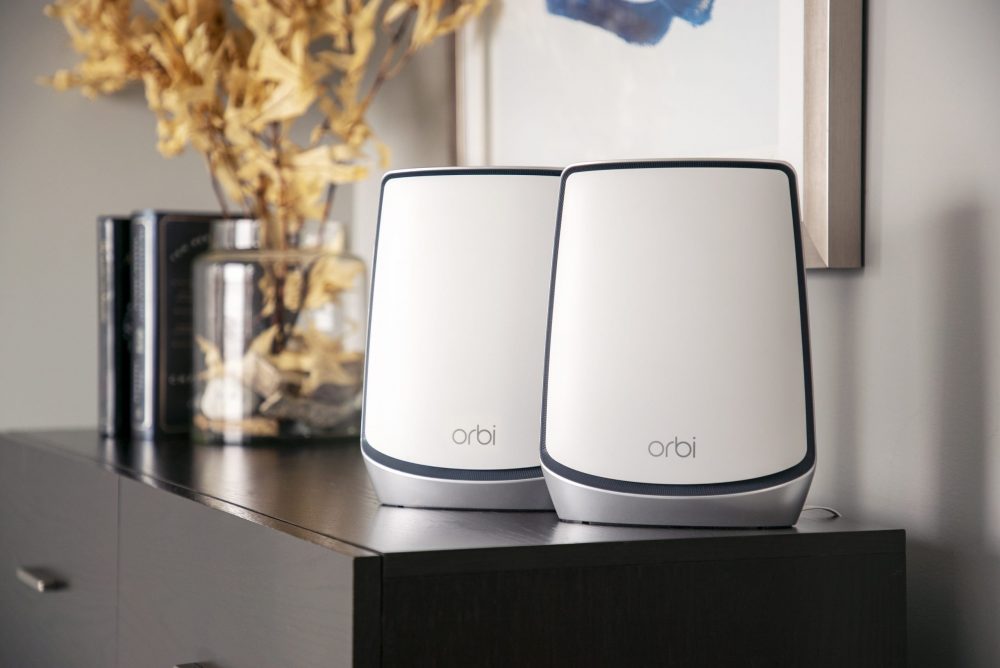 The model we tested out was the NETGEAR Orbi & Mesh Router RBK853. It comes with a main router and two satellites. All three pieces of equipment are sleek and attractive – and since they are such an important necessity in a home I am really glad they they are so aesthetically appealing. We have placed one in our main room and one in the furthest room in the house and one in the previously hard to reach Hobbyraum at the rear of the building. This way we now seem to have the whole of our living space covered with really fast wifi. The only thing an Orbi satellite needs is a power outlet as everything else works wirelessly.

How To Set The NETGEAR Orbi 6 Mesh Router Up 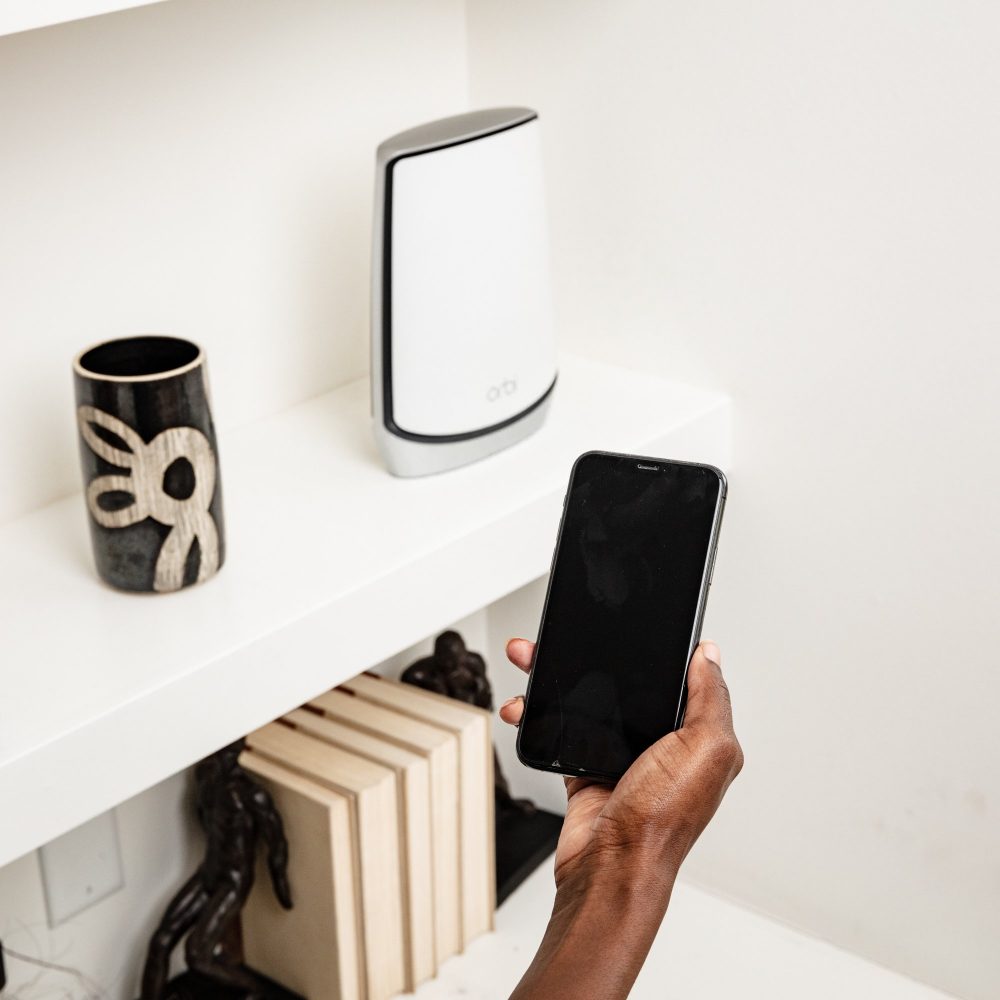 The initial setup and day to day control is managed through the Orbi App which you can download free of charge to your mobile device (Apple or Android). Following the instructions on the App, the initial setup is very simple and slick, requiring no technical skills. In fact within a matter of minutes you should have your secure high performance network all ready to go! The router is connected to the Internet modem/gateway, and Orbi helps you decide the ideal positioning of any satellite. In addition to the main network, if you wish, you can also set up a second WLAN for guests in no time at all. Orbi systems also support voice control from Alexa™ and the Google Assistant™.

Because the NETGEAR Orbi 6 is so powerful there is no need for WiFi extenders/repeaters, and it also means an end to dead zones, dropped connections and buffering. Orbi WiFi 6 also means that the best speeds can be maintained even with multiple devices contending for bandwidth in your home. The “Hobbyraum” at the back of our apartment, where it has always been difficult to get a good connection is now working perfectly on wifi as thanks to its mesh network technology, Orbi Wifi 6 managed to stretch to that far corner of the building. 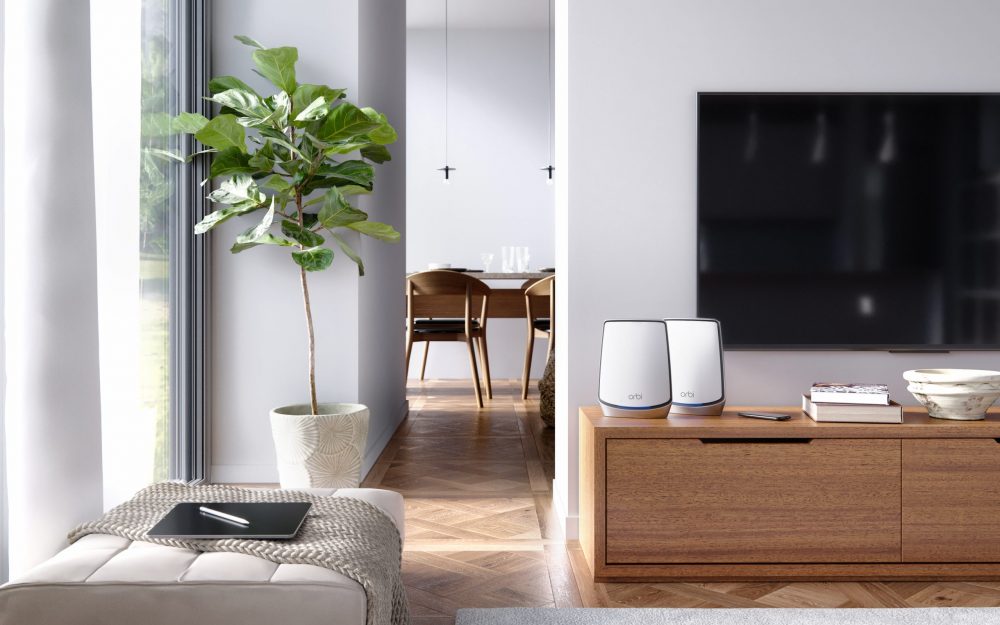 Orbi uses the latest WiFi 6 technology to flood your home with a super strong signal, even penetrating through ceilings, walls and floors. It delivers super fast internet speed that is both strong and reliable. As a result we now have lightning fast wifi in every room. It is offering us a far higher performance than our previous router and nobody is now battling for contention! We tried to see if it would reach to our basement room below our apartment (which is basically a concrete bunker) but unfortunately that is a bridge too far, but everywhere else it is absolutely perfect and absolute dream in comparison to our old router!

The NETGEAR Range Of Orbi Wifi 6 Routers For All Requirements

The Netgear Orbi 6 is multiple award-winning system and it offers three basic systems to choose from, depending on your requirements. You can also add to your system in a modular way if your needs increase.

The NETGEAR Orbi WiFi 6 AX1800 (RBK352) is the entry level to the WiFi 6 world and is suitable for apartments on one floor up to a size of 200 square meters. The system, which consists of a router and a satellite, enables speeds of up to 1.8 Gbit/s via dual-band WLAN. The NETGEAR Orbi WiFi 6 AX1800 (RBK353) covers up to 300 square metres with a performance of up to 1.8 Gbit/s.

The NETGEAR Orbi WiFi 6 AX6000 (RBK 852) is the flagship, offering the very best in performance with lossless top speeds of up to 6 Gbit/s over an area of ​​up to 350 square metres. The Orbi RBK 852 allows up to 12 streams enabling you to connect up to 100 devices with Uploads and downloads to the cloud, as well as 4K or 8K UHD video streaming without delay or buffering. The Orbi RBK852 also features the patented tri-band mesh technology. The NETGEAR Orbi WiFi 6 AX6000 (RBK853) provides coverage for up to 525 square metres. The 8 Series Orbi routerscan be combined with a maximum of six satellites in order to cover an area of ​​up to to a whopping 1200 square metres. 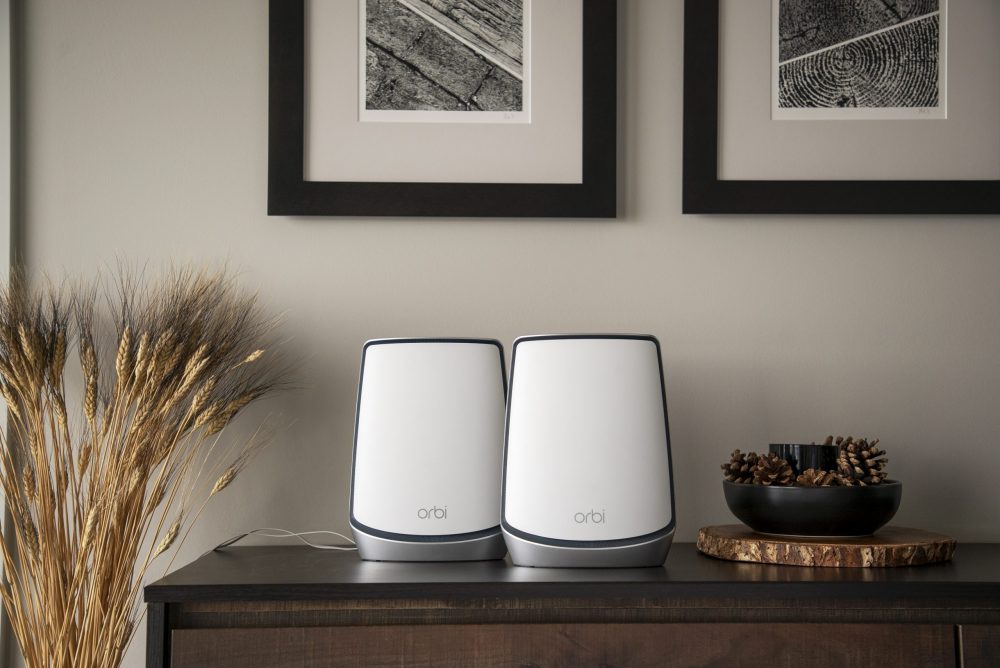 The Orbi WiFi 6 CAN Grow with your Requirements

You can add on to your NETGEAR Orbi WiFi 6 solution as your requirements grow. From the front door to the balcony or terrace and in every corner of your own four walls, a mesh system ensures ultimate WiFi coverage thanks to wireless satellites. Because it uses mesh WiFi technology it ensures coverage for blind spots, making disconnects, and long loading times a thing of the past. Orbi can be used for home office, home schooling, audio and video streaming or gaming – and for multiple users at the same time, without any loss of performance. All Orbi WiFi 6 systems feature the latest WiFi 6 technology, enabling super-fast connection speeds with more devices online at the same time,

We have been using the NETGEAR Orbi 6 now since late December and are really delighted with the performance of the system. It was easy to install and we can now enjoy high quality, super fast wifi which reaches across all corners of our living areas. It is just so good and I can highly recommend it!

You may also like to see this short video about the Orbi Wifi 6 here:

The Netgear Orbi Wifi 6 was provided to us to evaluate, but all opinions are 100% our own

3 Stylish Mountain Hotels You Have to Visit

What’s On In Zurich Early February 2022