The Spectacular “Fire On The Rocks” at The Rhine Falls Switzerland

Swiss National Day Festivities at The Rhine Falls Near Schaffhausen

The Spectacular “Fire On The Rocks” at The Rhine Falls Switzerland

Celebrate Swiss National Day With Fireworks at The Rhine Falls 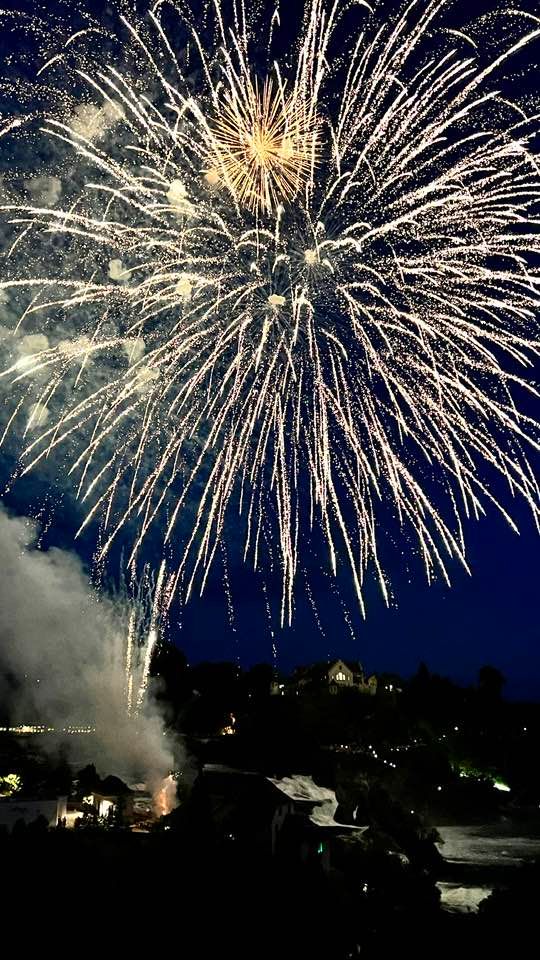 Swiss National Day Festivities at The Rhine Falls Near Schaffhausen

One of the most popular ways of celebrating Swiss National Day is to take a trip to the spectacular “Fire On The Rocks” at the Rhine Falls in Switzerland. Although it’s a celebration of Switzerland’s birthday, it actually takes place not on 1st August, like most Swiss National Day celebrations, but on the 31st July. It is a FREE event to which all are welcome. However, although it doesn’t start till 9.45pm, it does pay to get there early as all the best spots start getting taken up to an hour or so before it kicks off!  With up to 10,000 spectators arriving, there is plenty of competition for great vantage points. 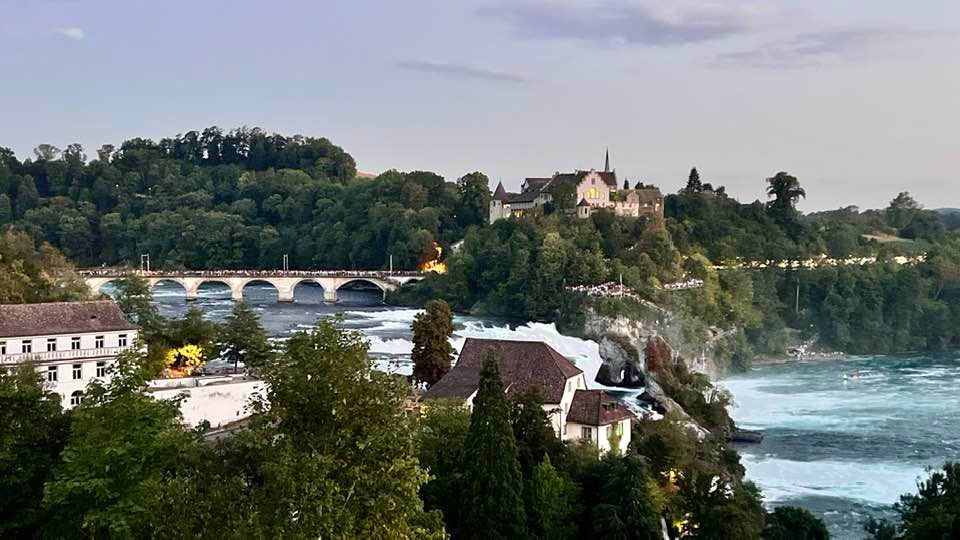 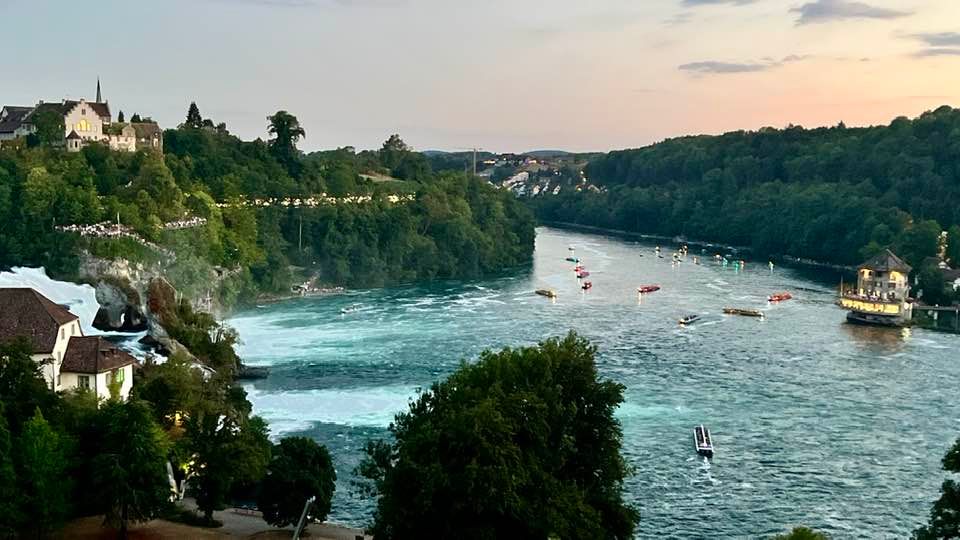 When you arrive and it’s still light you can admire the beauty of the falls. However, before long, as the sun sets and the darkness descends,  the Rhine Falls become beautifully illuminated for the Fire On The Rocks fireworks display. You can see a short Instagram Reel of the display here. 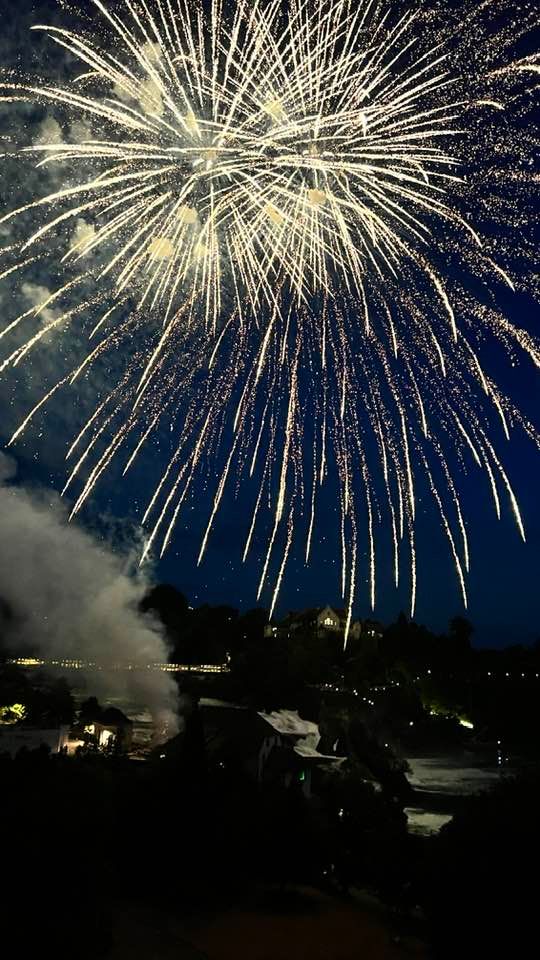 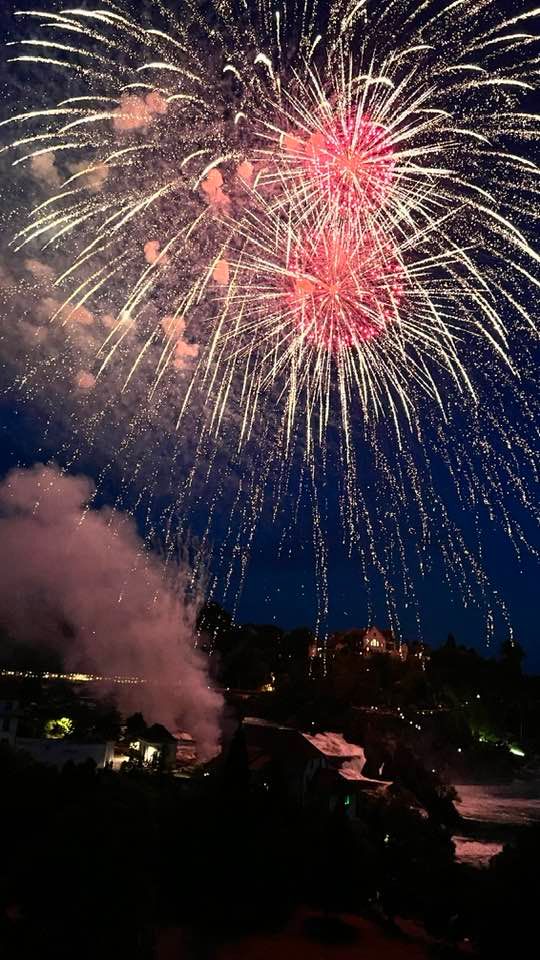 The fireworks give a very special feel to the celebration as they burst up into the sky hight above the powerful falls. The fireworks can be viewed from so many different angles. You can even book a boat for a very special viewing point! Other suggestions include booking a table at the restaurant as Schloss Laufen which is directly opposite. 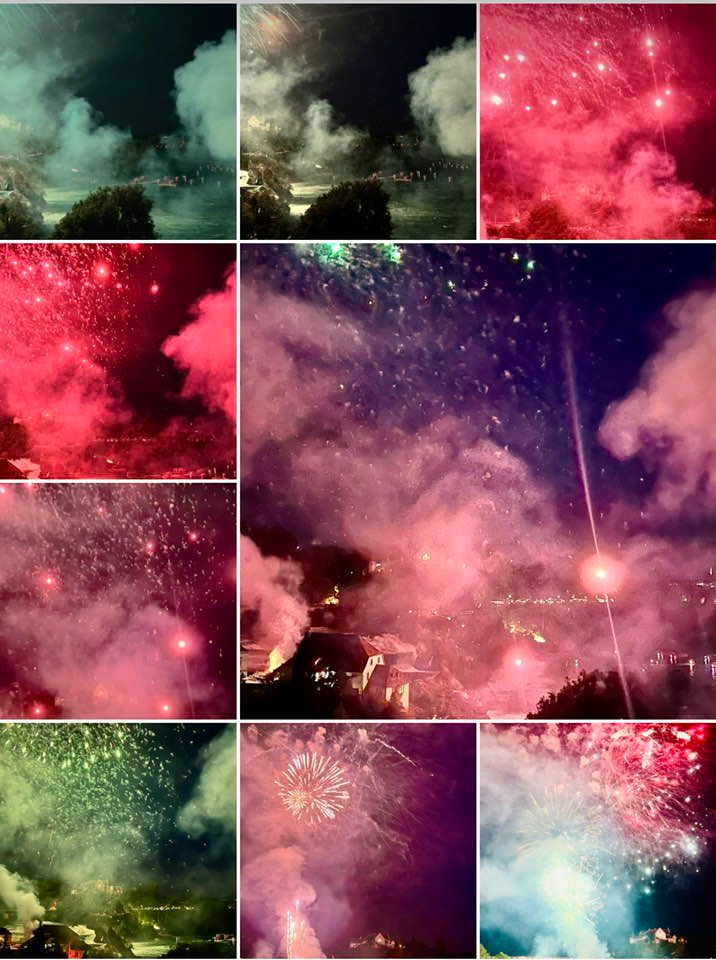 We didn’t arrive as early as early as we had intended (as we had been visiting Lake Oeschinensee earlier in the day) but even so, arriving by train we were able to find a good viewing point from which we took these photos. 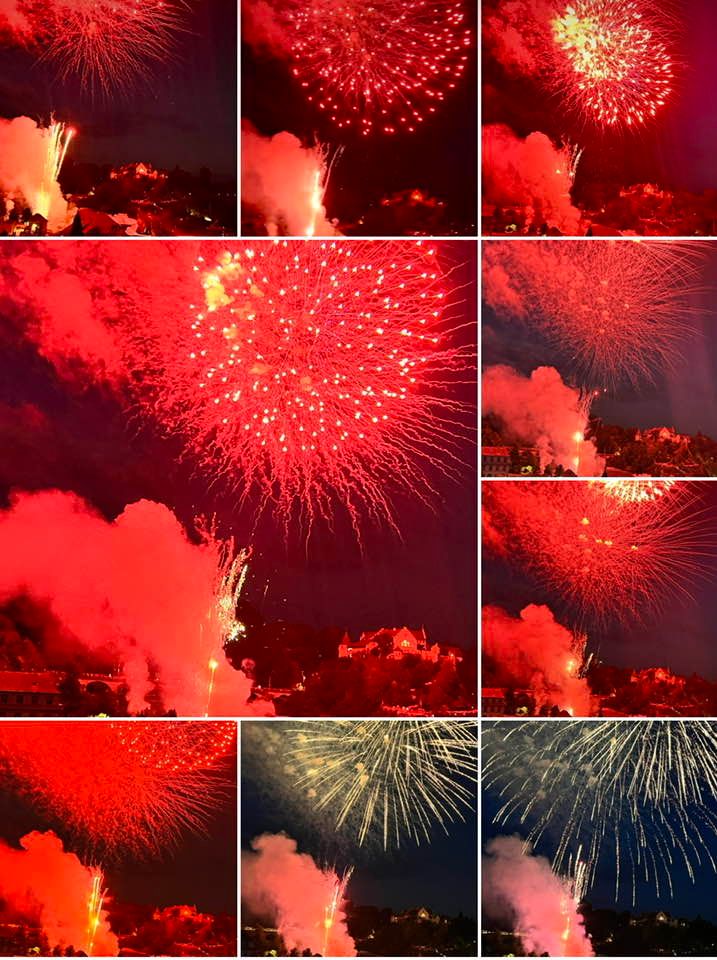 Please note that unfortunately you’re not allowed to take remain on the Neuhausen Rheinfall station platform (from which you get very good views!) for reasons of security! 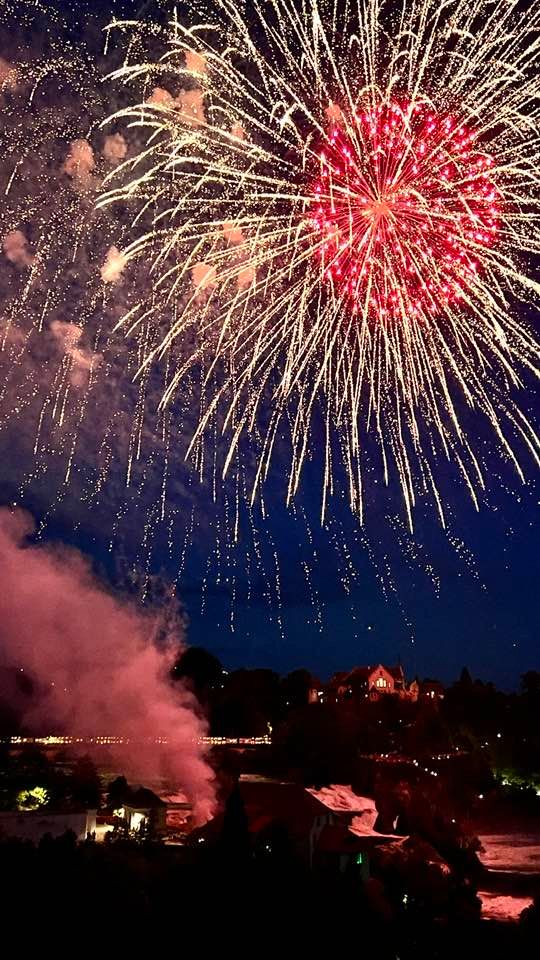 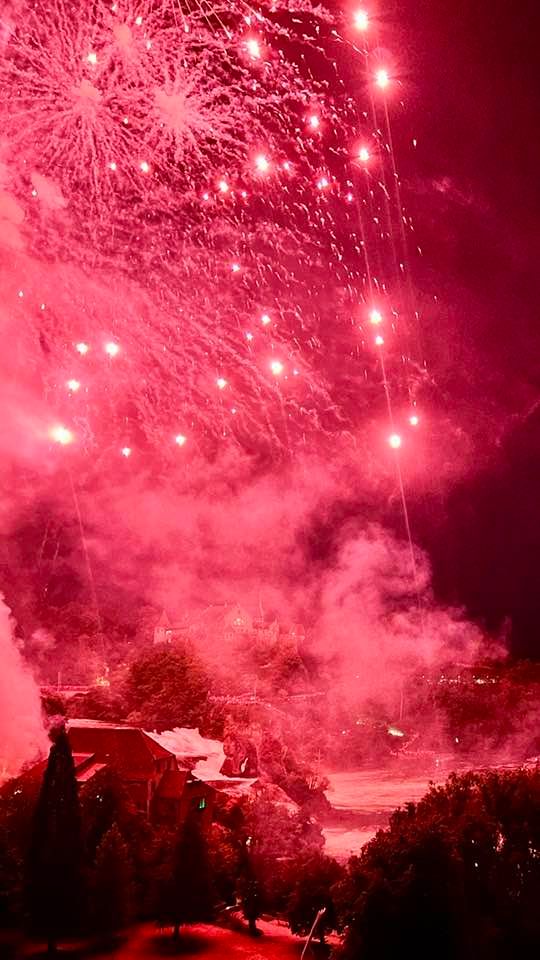 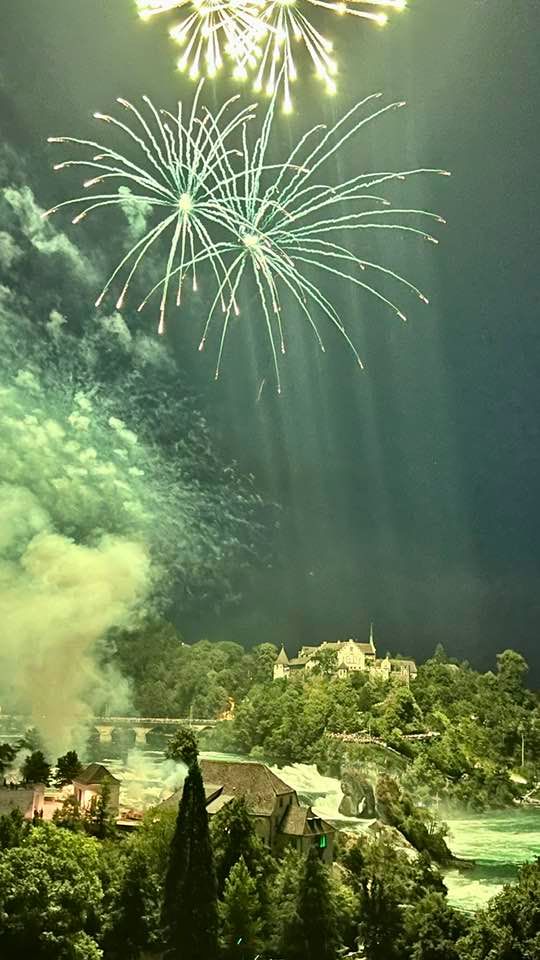 Food and Drinks At the Rhine Falls Fireworks Event

All along the Rheinfallquai and on the area of Schloss Laufen there are lots of food trucks and snack bars to keep you fed and watered for the Fire On The Rocks event. Once the fireworks were over, there were some extra trains laid on to ferry people back to Schaffhausen and Zurich, whilst others stayed to enjoy the celebratory atmosphere with food and drinks. 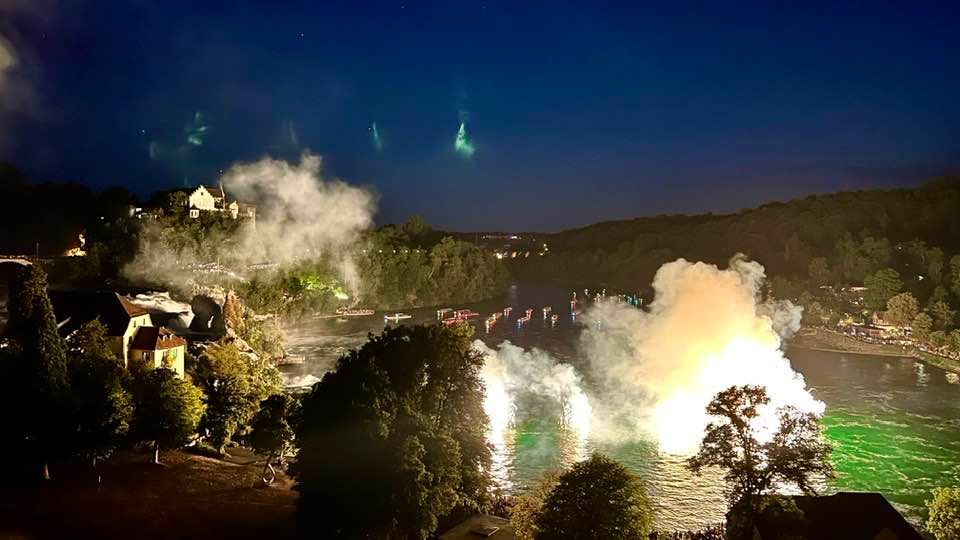 You can find out more at www.rheinfall.ch/feuerwerk website here.

See our Instagram Reel of the spectacular Fire On the Rocks at the Rhine Falls Switzerland here:

“Fire On The Rocks” at The Rhine Falls Switzerland

When: 31st July every year

What’s On In Zurich End of July Early August 2022

Exploring The Top Cultural and Historical Highlights in Canton Aargau

Wonderful Gourmet Festival of Arts at the Hotel...

You need to go to Zürich Airport but you don’t