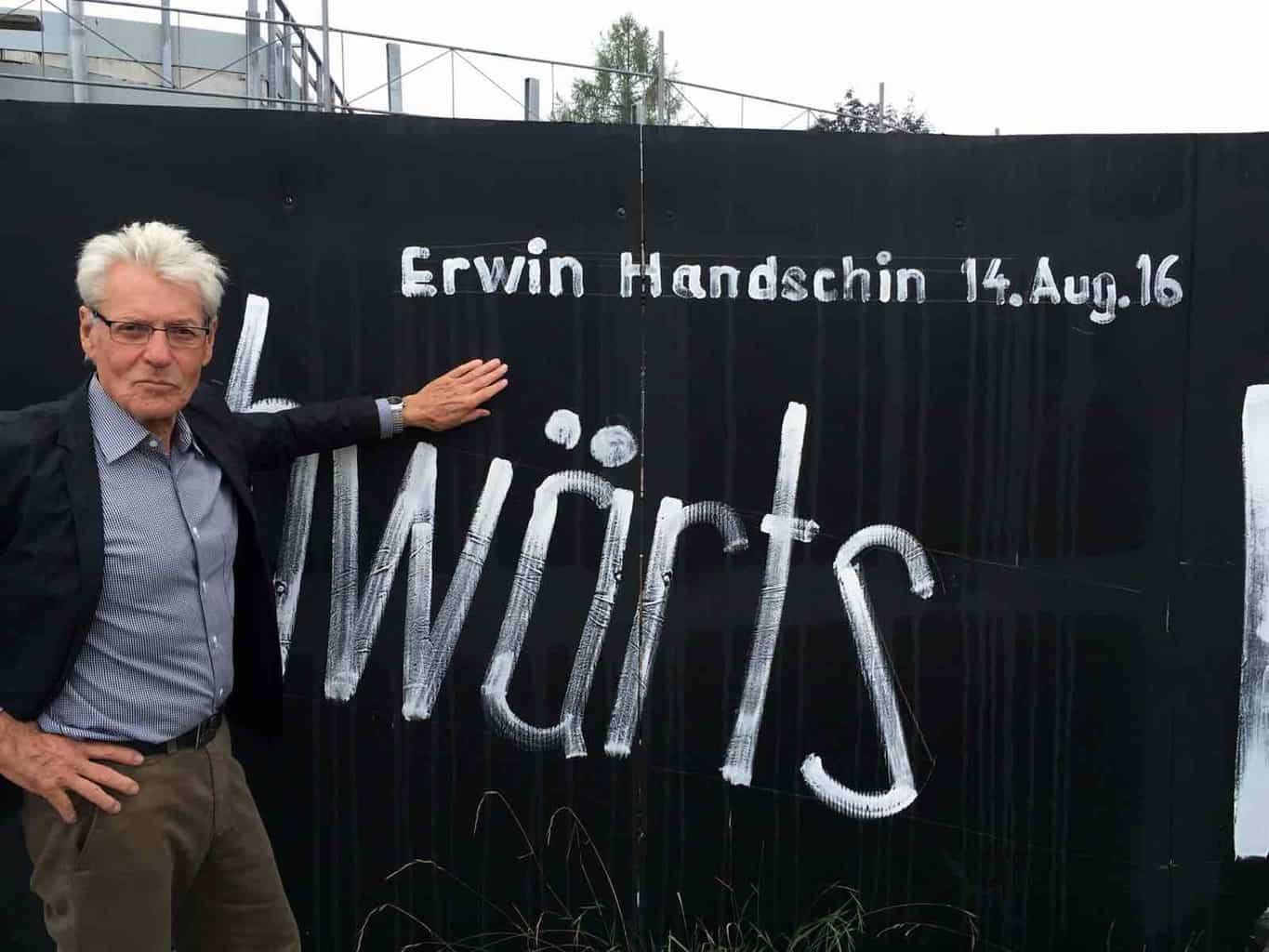 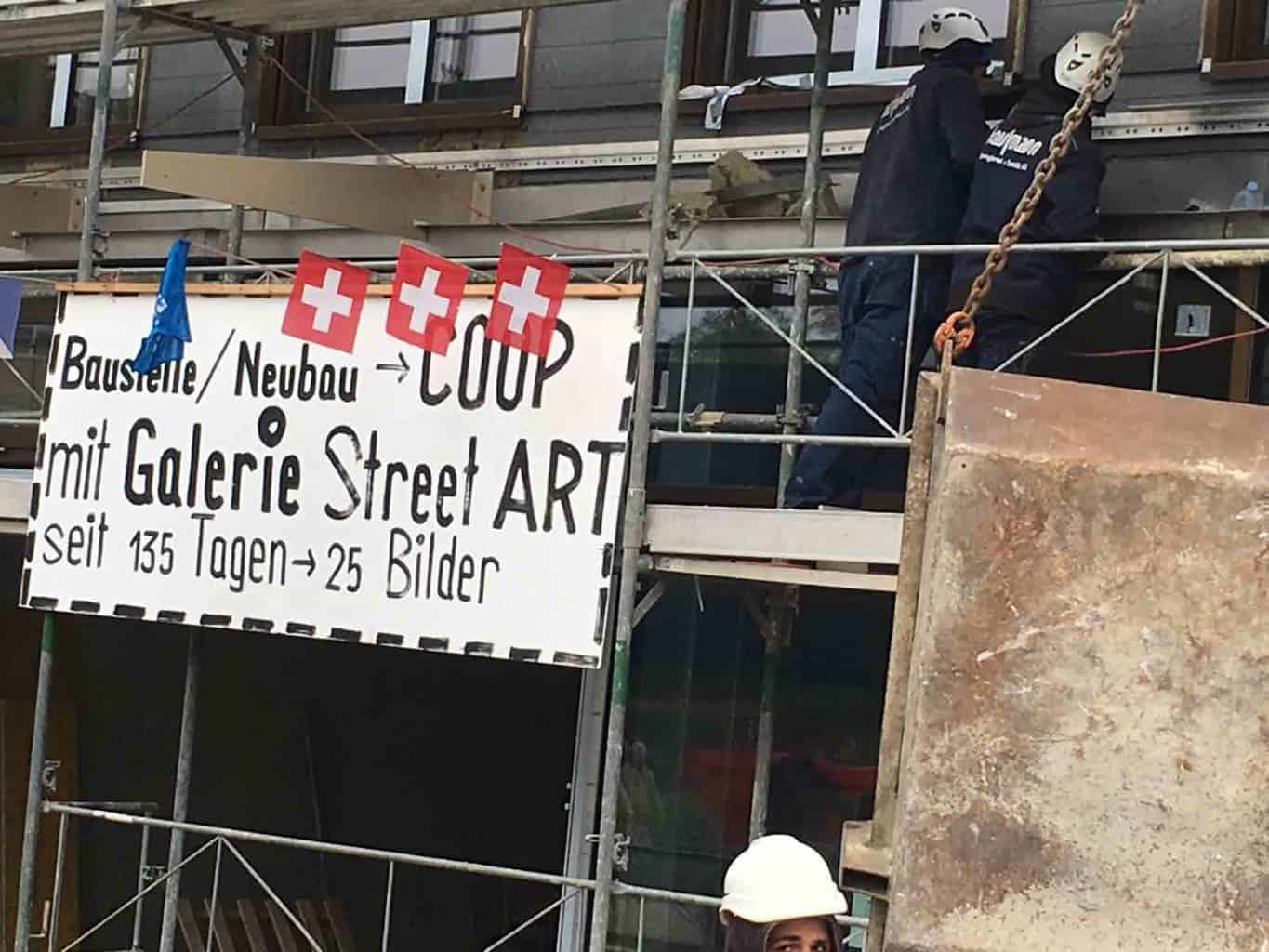 Who was that mysterious mural maker?

Anyone who drove or walked along Schwantenmos Street in Zumikon the last several months couldn’t help but notice the sprawling self-described “Street Art Gallerie” covering the barriers around the COOP/Morgental Shopping Center construction site.

Every month, the 30-meter-long wall would be painted over black and a new design would appear. Witty, upbeat and provocative, the stark white graphics, sporting stick figures, smiley faces and clever bits of text, were the work and brainchild of Erwin Handschin, a 74-year-old marketing retiree and fiercely active Zollikon resident.

Part social commentary, part personal-cause platform, his subjects spanned a wide range: from the Gotthard Tunnel and the success of the Swiss plane Solar Impulse Nr. 2 to climate change and the 70th birthday of the bikini.

“From the beginning, I only wanted to be creative humorous and entertain but also be critical and provocative,” says Handschin, who had to obtain five separate permits from the Gemeinde, Polizei and builder, before he got started last April.

Handschin’s philosophy is that art can be critical and part “protest” but also entertaining and upbeat at the same time.

“I wanted to only make a positive impression, that is me, I am a positive person, “ he says. “So far everyone’s been very pleased.”

Although Handschin, a Zurich native, never trained as an artist, he studied photography when he was young and has always pursued creative projects. After 9/11, he did a street performance on the Bahnhofstrasse where he posted a collage and held signs that said, “Wir alle sind Amerikaner.” (We are all Americans.)

And between 2000-2009, he was financed by the town of Zollikon to produce 18 different signs or installations throughout the town that commented on current events like the World Cup.

The End of the Street Gallerie Zumikon

But, despite the positive reactions to his work, he has no plans to continue the Street Gallerie or any other project at the moment. The text in his final piece amounts to a quirky mystery-man send off: “Dankeschön Applause Ende ich bin mit 007 in Monte Carlo.”

While he says he might make an exception and do another project if offered, he is content at the moment to pursue his long list of hobbies, which includes biking, running, working out, architecture, trains, fashion and travel.

And, while one of his signs still hangs inside the construction site, the others exist only in photos and people’s memories, which Handschin feels is right.

“Everything comes to an end at some time,” he says. 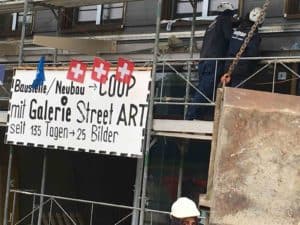 The last piece of Erwin’s art

Article written and photos taken by Jennifer Lisle. Jennifer is a  Zurich-based freelance journalist who has written for The Los Angeles Times, The Wall Street Journal and Elle, among many others.