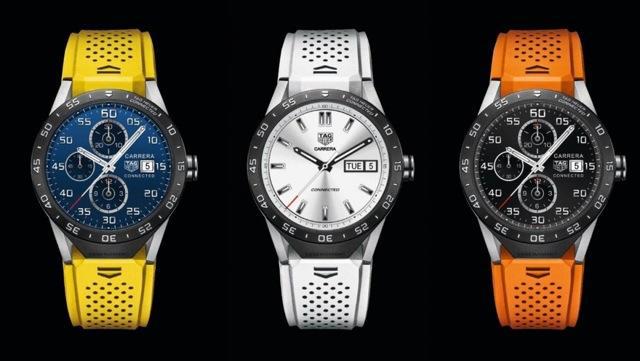 A 21st Century Twist on the Swiss Watch

The Tag Heuer Connected Watch is a new Swiss Smart watch which is actually a collaboration between Tag Heuer and Google. Not only that, but it’s the first smart watch to be fitted with an Intel chip. As the first ‘luxury’ Android Wear smart watch it’s certainly a trailblazer. It was announced at Baselworld and launched in America in November 2015, and on both occasions CEO Jean-Claude Biver celebrated by sharing his Alpine cheese from his farm in the Swiss Mountains.

The Tag Heuer Connected smart watch is large! With a 46mm build, the case and lugs are made of grade 2 titanium and are covered by a crystal sapphire. Set off with a black rubber strap as standard, there are in fact six colours to choose from – red, blue, white, orange, green and yellow, which are sold separately. The watch will play all Android Wear apps and it comes already loaded with four apps  – Insiders, GolfShot, RaceChrono Pro and Viewrangers. Connectivity is via Wi-Fi and Bluetooth.

It’s a coming together of luxury and function and of course very 21st century!

The Tag Heuer Connected is on sale now. For details on where to purchase see here.