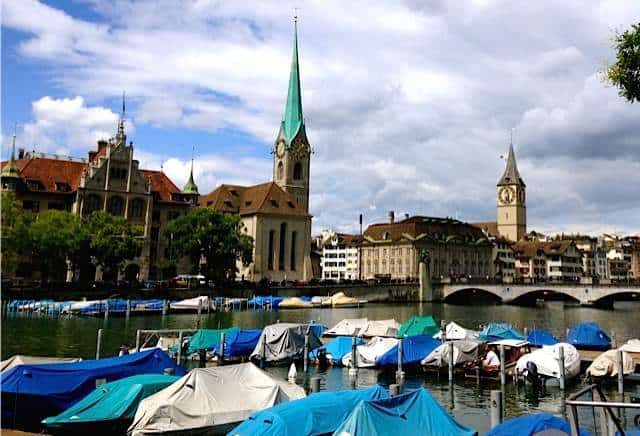 On the opposite bank of the Limmat from the Grossmünster sits the Fraumünster with its tall, slender green spire.

Emperor Ludwig, who was also known as Louis the German, and the grandson of Charlemagne, founded a convent on this site in 853 for his daughter, Hildegard. She became the first abbess there. Hildegard’s sister Bertha added a basilica and a crypt to the building in 874 for the relics of Felix and Regula, the patron saints of Zürich, who were martyred nearby, along with their servant Exuperantius.

In the 11th century the abbesses had a very powerful position in society and the convent became home to many German noblewomen until the 13th century. The present church dates from about 1250, but the crypt of the old abbey church is preserved beneath.

The convent was closed at the Reformation and in 1524, the last abbess, Katharina von Zimmern, converted to Protestantism and donated the church and abbey to the city of Zurich. As result all the Catholic imagery, icons and the organ were destroyed. However, between the years 1833 and 1844 the Fraumünster hosted both Catholic and Protestant services.

The Fraumünster underwent big changes in the 20th century and the key additions were the 5 world-famous windows created by the 80-year-old Marc Chagall. Belarussian-born Marc Chagall created this series of stained-glass windows and a rosette for the chancel in the 1970s. This famous masterpiece by Chagall attracts visitors from around the world. Marc Chagall’s motto was “When I create something from my heart, almost everything goes well” throughout his whole life.

He was not a young man when he created the windows and was already in retirement but felt this work was a calling. He died in 1985, just before his 98th birthday.

There is also is a large stained-glass window by Giacometti in the north transept depicting God and Christ, eight prophets, the Four Evangelists, and ten angels – another important work of art. The church organ is also very impressive having 5,793 organ pipes, and is the largest organ of the whole of the Canton of Zurich.

Today the Fraumünster attracts visitors from all over the world to view this historic church and the beautiful stained glass windows.

The church is open from 10am – 4pm from 1st November to 31st March and from 10am – 6pm from 1st April – 31st October. Entrance into the church is free of charge, but there is no admittance when a service is taking place. For more information please see the Fraumünster website (in German).

For other key sightseeing places in Zurich see below: